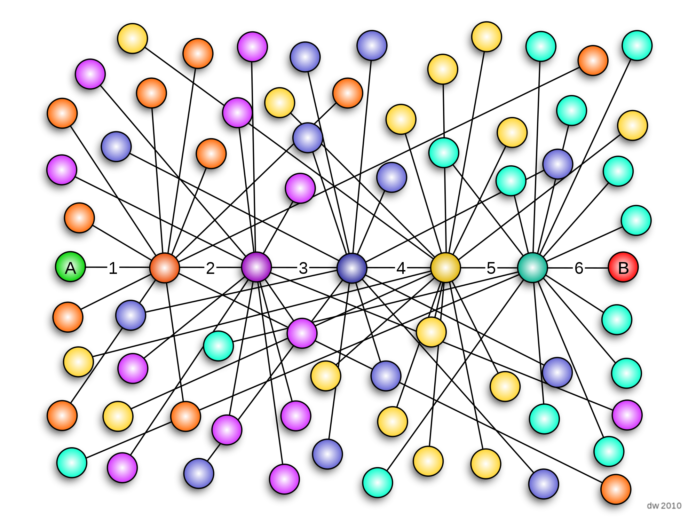 At family reunions, my mother used to joke about the fact that actress Shirley Jones (of “The Partridge Family” fame) never showed up. Apparently someone had figured out that Jones was a distant relation by marriage, and more than once I heard of plans by one of my cousins to invite her to a reunion just for fun. Whether an invitation was ever actually sent I don’t know, nor can I recall the exact chain of relatives that supposedly connected me to Jones. But I always enjoyed the thought of being related, however distantly, to a celebrity. I imagined showing up at a dinner or award ceremony where I’d be introduced to the rich and famous: “This is Joe Kissell, my third cousin-in-law, once removed.” I didn’t suspect it at the time, but if a prominent sociological theory is correct, I may have indirect social connections to millions or even billions of people.

The theory in question, of course, is that of “Six Degrees of Separation”—roughly, the notion that anyone can form a chain of personal contacts leading to any other person, with no more than six links in the chain. Nearly everyone has heard of this idea, thanks to John Guare’s 1990 play “Six Degrees of Separation” and the “Six Degrees of Kevin Bacon” game that became popular in the late 1990s. But what many people don’t realize is that this game has its roots in serious sociological research, and that work is currently underway to establish the validity of the theory scientifically.

The late Stanley Milgram, a Harvard social psychologist, performed an experiment in 1967 to determine the extent of social networks in the United States. In his study, it took an average of six steps for a letter sent to a random resident of Omaha, Nebraska to reach a target person in Boston—using only personal contacts to form a chain. This was the origin of the “six degrees of separation” idea, but Milgram’s small experiment was hardly conclusive, restricted as it was to a very small sample size (and with all participants within the United States).

Nearly four decades later, as part of the Small World Research Project at Columbia University, sociologists attempted a modern version of the experiment using email. The project worked like this. You registered on Columbia’s website, providing demographic information about yourself and answering a range of questions to help the researchers make sense of their results. You were then presented with the name and location of a target person somewhere in the world. The idea was to send a specially formatted email message to someone you know who you think is closer to the target (in one way or another) than you were. When this next person in the chain received your message, the process repeated until, the researchers hoped, a chain formed all the way from you to the target person. Among other things, the experiment hoped to determine what the average length of such a chain is, providing some statistical validation or refutation of the “six degrees” notion.

The experiment ended after a couple of years, producing some very interesting results (only some of which were ever published). In all, more than 60,000 people from 166 countries participated in the experiment’s first round. Although over 24,000 chains were started, only 384 of them successfully reached their targets. Most of the unsuccessful chains were broken simply because someone along the way chose not to participate. The high number of incomplete chains skews the otherwise impressive results: the successful chains required an average of only four links. However, when they factored in how long the broken chains most likely would have been, had they been completed, the researchers estimated that people are separated by five to seven degrees—with shorter chains expected between people living in the same country. In other words, there’s apparently nothing magical about the number six, but it does happen to be pretty close to the average number of social links most people have to most other people, at least among the 4.2 billion or so of us with internet access.

One of the main goals of this project was to determine which factors people consider in trying to form associative links. Every time participants selected a new message recipient, a form asked why they chose that person—for example, due to geographic proximity or a shared profession or hobby—as well as what their relationship to the person is (friend, coworker, relative, etc.). The experiment found that participants considered geographic proximity and similarity of occupation to be primary factors in choosing how to continue a chain. And although people most frequently chose friends as the next link, professional relationships were much more likely to lead to a successful chain. I participated in a couple of chains in the experiment’s first round, and although I consider myself relatively well-connected, neither of my chains successfully found its target. But the question is not whether there is a link between any two people; it’s how you go about finding it. Email may or may not be the best discovery method, though it certainly does have a kind of efficiency that casual conversation or letter writing do not.

Note: This is an updated version of an article that originally appeared on Interesting Thing of the Day on May 10, 2003, and again in a slightly revised form on June 21, 2004.