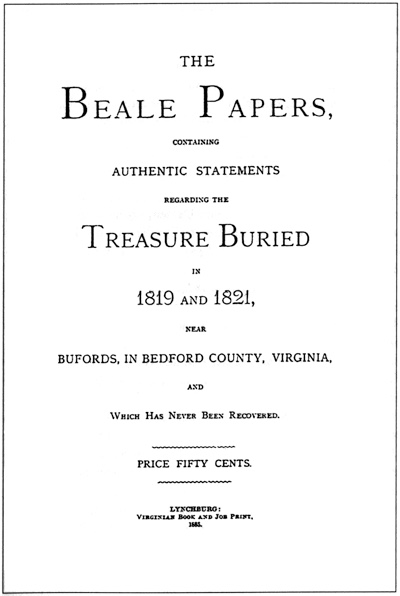 Leaving aside religious symbology and questions of historical accuracy, The Da Vinci Code is just another in a long line of stories that follow roughly the same plot: someone discovers a series of mysterious clues (often with a code or a map thrown in) that supposedly lead to an absurdly valuable treasure. The hero undertakes a perilous adventure, outwitting villains who want to steal the treasure (as well as, perhaps, guardians who want to protect it), and eventually succeeds—only to discover that the treasure was not quite as it had been imagined after all. From Raiders of the Lost Ark to Indiana Jones and the Last Crusade to Harry Potter and the Sorcerer’s Stone to National Treasure, I’ve seen variations on this basic outline countless times. Few subjects ignite the imagination of the book-buying and filmgoing public as reliably as that of hidden treasure.

In the real world, stories of codes leading to buried treasure rarely have tidy endings—and indeed, even separating fact from fiction can be nearly impossible. Such is the case with one of the most intriguing cryptographic puzzles in modern history: a series of encrypted messages dating from the 19th century known as the Beale ciphers. These messages might lead to a hidden stash of gold, silver, and jewels worth tens of millions of dollars, they might be genuine directions to a treasure that no longer exists, they might be a hoax or a joke, or, intriguingly, they might be a misunderstood charity fundraising gimmick. But whether or not the codes lead to treasure, what captivates and infuriates cryptographers is that despite more than a century’s worth of effort by the best minds and machines, the most important parts of the messages remain stubbornly opaque.

Genesis of a Mystery

The story goes approximately like this. A man named Thomas Beale, along with about 30 companions, set out to hunt game in New Mexico in 1817, and unexpectedly came upon a large deposit of gold and silver. After mining the treasure, the group made two trips across the country, in 1819 and 1821, to Bedford County, Virginia, where they buried the gold and silver, along with some jewels they obtained along the way, in a stone-lined vault under 6 feet of soil. The men wanted to return to their mining site to retrieve a third batch of treasure in 1822, but before doing so, took out an insurance policy of sorts in case something should happen to them.

Beale wrote three encrypted messages, which contained, respectively, the exact location of the vault, its contents, and the names of the men in his party and their next of kin. He put these, along with two letters of explanation, in an iron box, which he entrusted to an innkeeper named Robert Morriss. Beale mailed Morriss a third letter from St. Louis some time later saying that if he didn’t return within 10 years, Morriss was to open the box and follow the instructions inside, some of which Morriss would need a key to decipher. That key was to arrive in a fourth letter, which Beale had asked a friend in St. Louis to mail to Morriss in ten years’ time.

Well, Beale and his entire party were never heard from again, and the promised fourth letter never arrived. Morriss waited a full 23 years before opening the box. When he read the enclosed letters, he discovered that Beale wanted him to decipher the secret messages, retrieve the treasure, and divvy it out to the men’s families (keeping a share for himself for his troubles). Without the missing key, though, Morriss couldn’t make sense of the encrypted messages, which consisted of nothing but long lists of numbers. After a further 17 years, and shortly before his death, Morriss passed the box on to a friend, who was able to decipher one of the three messages—the one detailing the treasure’s contents—but not the other two. In 1885, a man named James Ward, acting on behalf of Morriss’s friend, published and sold a 23-page pamphlet (known as The Beale Papers) that included the text of Beale’s letters and encrypted messages, as well as the solution to the deciphered message. Ever since, treasure hunters and code breakers have tried unsuccessfully to decrypt the other two messages and find Beale’s treasure.

The message Morriss’s friend successfully deciphered used a cryptographic technique called a book cipher. To make a book cipher, you start with a document—any document, as long as the person writing the message and the person reading it have identical copies—and number all the words consecutively. This becomes your key. Then, to create your ciphertext, you look through your key for each word you want to encode and write down its number.

In this case, the message was encrypted letter-by-letter, with each number in the ciphertext referring to the first letter of the corresponding word in the key. For example, if my key were “Interesting [1] Thing [2] of [3] the [4] Day [5],” the cipher 5 3 1 2 would represent “Do it.” Beale used a version of the Declaration of Independence as the key for his second message, but no one has been able to determine what key was used for the other two—or, in fact, whether they even use the same encryption method.

Predictably, after many decades of failed attempts to decipher the two remaining messages, popular opinion began leaning toward the notion that the whole thing had been a hoax, and that the encryption could not be broken because there was no underlying message. Numerous analyses by professional and amateur cryptanalysts over the years have yielded some interesting observations. For example, statistical evidence strongly suggests that the same person who wrote The Beale Papers also wrote Beale’s letters, casting doubt on the authenticity of both. Likewise, an analysis of one of the undeciphered messages using the Declaration of Independence as a key revealed patterns that are mathematically unlikely to have occurred with any other key. In other words, someone may have used the Declaration of Independence to encipher random gibberish.

Furthermore, the story itself contains many suspicious elements. There appear to be no records of any of the 30 men in Beale’s party, and even the existence of Thomas Beale himself is a matter of some uncertainty. His messages contain some historical errors and apparent anachronisms. And there would appear to be no good reason to encrypt each of three messages individually, using separate keys. In all, the story sounds too much like the plot of a cheap novel, which, according to one theory, is exactly what it was.

Some researchers believe that The Beale Papers was written anonymously by a playwright and novelist named John W. Sherman and distributed by Ward—a close relative—not as a hoax or a scam but as a fundraiser. The pamphlet was published shortly after a major fire in Lynchburg, Virginia that killed five men. Ward and Sherman may have cooked it up to help raise money to provide for the bereaved families, with the assumption that purchasers would realize it was a work of fiction. According to this theory, only later, after the story had gained some popularity, was it sold more widely and with less virtuous goals.

Another theory holds that the pamphlet was written by none other than Edgar Allan Poe, to be published posthumously as a sort of final mystery from the great beyond. The text does contain many similarities to Poe’s writings, so it seems likely that if even if Poe did not write it, the author tried deliberately to emulate his style in numerous details.

Take It on Faith

Many people, however, still believe that the messages are just what they appear to be. In 2001, a website appeared claiming that a man named Daniel Cole had deciphered the two remaining messages and located the spot where the treasure had been buried, only to find that it was already gone. Mr. Cole apparently died that same year, and although the site shows the supposedly decrypted messages (as well as pictures of the alleged burial spot), the site’s maintainers have not revealed the key (or keys) they used—meaning that no one can verify or disprove their claim. Then, in 2018 another rather bizarre site appeared with claims that a group had not only deciphered the location but also found the vault itself. However, the location was not revealed, no evidence of a treasure was shown, and all members of this group are conveniently anonymous. So their purported solution is, thus far, less than convincing. (In other words, show me the money.)

Whichever of these theories, if any, is correct, the world may never know the truth. Just as an empty hole is no proof that it once contained treasure, statistical analysis of a still-undeciphered message is no proof that it’s meaningless. It might have been a laundry list, a practical joke, or the real thing, but The Beale Papers did contain a cautionary note, which read in part, “Again, never, as I have done, sacrifice your own and your family’s interests to what may prove an illusion…” Those who followed the author’s advice not to waste more time than they could spare on cracking the code may have been the wisest of all.

Note: This is an updated version of an article that originally appeared on Interesting Thing of the Day on May 31, 2006.