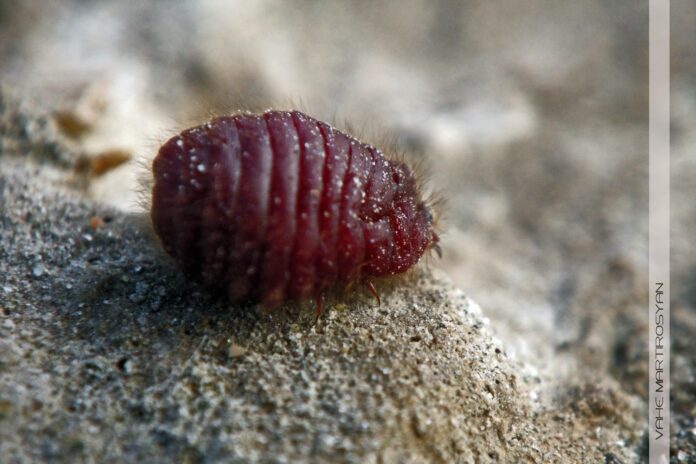 When I was a kid, there was a time when artificial red food dyes came under intense scrutiny because of their purported health risks. In 1976, the U.S. Food and Drug Administration banned the dye FD&C Red #2 because scientific studies showed it had carcinogenic effects on female rats. In response to the public concern about red food coloring, food manufacturers discontinued some of their red products, even if they didn’t contain Red #2. I remember this clearly because it meant that certain types of candy (such as M&Ms) no longer included red-colored pieces, and that I avoided any red candies I came across. More recently, another type of red food dye, FD&C #40, has been linked to increased hyperactivity in children, although it remains on the list of FDA-approved color additives.

Because of the controversy surrounding these artificial dyes, some food manufacturers have turned to another source of red coloring. Known as cochineal (or in some forms, carmine), this dye, produced from a type of insect native to South America and Mexico called the cochineal, has a history that goes back hundreds of years.

The cochineal insect’s entire life cycle takes place on the pads of certain species of prickly pear cacti. Although sometimes mistakenly referred to as a beetle, it is in fact a scale insect, a type of bug that is usually quite small and that lives by attaching itself to a host plant and drawing sustenance from it. Like other scale insects, the cochineal produces a protective covering for itself, which appears as a white fluffy material on the pads of the cactus. The females are larger than the males, and live longer than the one week that is typical for males. Cochineal insects produce a chemical called carminic acid, which helps them repel predators, and is the source of the dark purple color used to make cochineal dye.

The traditional method of obtaining the dye is to remove the insects from the cactus pads by hand, and then to dry them in the sun before crushing them into a powder. It’s estimated that it takes about 70,000 cochineal insects to produce one pound (about 500 grams) of the cochineal powder. Carmine is a further refinement of the cochineal dye, obtained through a process of boiling the powder with certain other chemical compounds.

The production of cochineal was well established in Mexico when the Spanish first arrived there in the 16th century. Impressed with the vividness of the dye, they soon began exporting cochineal to Spain and the rest of Europe in vast quantities. Cochineal became a prized commodity on the Continent (Spain refused to trade it with the English), and it created huge profits for Spain. For this reason, the cultivation of cochineal was aggressively restricted to Spanish-controlled Mexico, although this changed when a French naturalist managed to smuggle cochineal-infested cactus pads to Haiti in 1777.

From there, cochineal production eventually expanded to South America, India, Portugal, and the Canary Islands, where it became particularly successful. The long-time demand for cochineal started to ebb in the late 1800s as new synthetic dyes were developed, and soon it was no longer economically viable to continue its production.

Now, however, cochineal has emerged as a nontoxic alternative to the artificial dyes that supplanted it in the 1800s, and it is again cultivated in the Canary Islands, Peru, and Mexico. Not limited to food, cochineal and carmine are used to give alcoholic beverages, cosmetics, shampoo, and pharmaceuticals a bright red color, and are now regularly added to such food items as meat, poultry, jam, cheese, pastries, yogurt, and fruit juices.

Before 2011, manufacturers in the United States were not required to list cochineal and carmine as specific ingredients in their products, but in response to public protest, the FDA began to look into the issue in January 2006. Certain groups of people, among them vegans, those who observe kosher or halal dietary restrictions, and people allergic to cochineal, argued that they should be warned about food items containing crushed insects. In January 2009, the FDA amended their regulations to require manufacturers of food and cosmetic products to label their products as containing cochineal extract or carmine, starting in 2011.

In 2012, Starbucks faced a public relations furore when it was revealed that cochineal was the coloring agent in their Strawberries and Creme Frappuccino mix. The company subsequently switched to a tomato-based colorant to appease their dissatisfied customers.

All these changes seems like a positive development; although I have no concrete objection to consuming insect carcasses with my daily yogurt (and knowing that it might be a better alternative to other forms of red dye), I still appreciate having full knowledge about what I’m eating all the same.

Note: This is an updated version of an article that originally appeared on Interesting Thing of the Day on August 10, 2007.