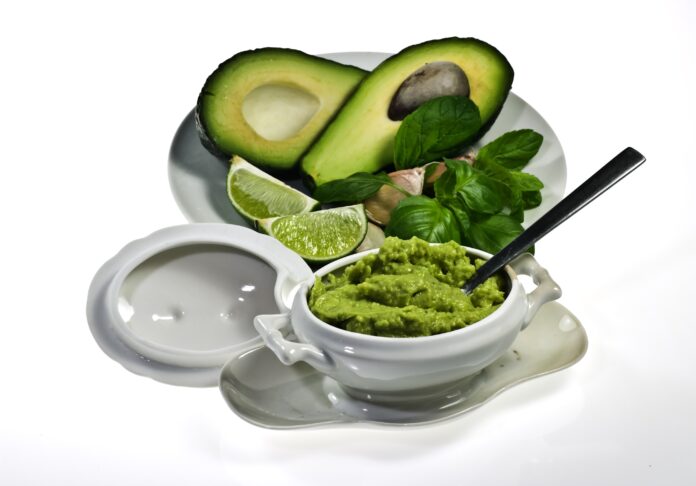 I live approximately 15 miles north of the U.S./Mexican border. Here in San Diego, authentic, high-quality, and inexpensive Mexican food is plentiful. We don’t quite have a taco truck on every corner, but there are usually at least two of them within a 10-minute walk of my house (that is, on my way to the nearest Mexican supermarket). And all this is terrific, because I’m quite fond of Mexican food. Today, however, we celebrate one weirdly specific element of Mexican cuisine—guacamole, the ubiquitous (at least in these parts) avocado sauce (or dip, if you prefer). In order to qualify as guacamole, the only ingredients technically necessary are mashed avocados and salt. That does indeed make a passable guac, although most people add some lime juice and a bit of cayenne, maybe some garlic, perhaps even a dollop of sour cream, and I think those ingredients, in moderation, make it even tastier.

It’s not uncommon to see guacamole with tomatoes and/or cilantro too, and although I don’t find either deeply objectionable, I’m not a huge fan. I feel like they take the whole guacamole concept in the wrong direction. There was also a controversy not so long ago about putting peas in guacamole, which I wouldn’t do myself, though it sounds merely weird—not offensive. But the ultimate sin, which alas is quite common (especially among American guacamole makers), is adding onions. That turns guacamole from a tasty thing I’m enthusiastic about eating into a disgusting thing that I will not bring near my mouth. And so, I never know what to say when offered guacamole (at a restaurant, for example), because I might love it or I might hate it, depending on that one crucial culinary decision.

Today, on National Guacamole Day, I hope you’ll make the right choice when it comes to your ingredient list. But even if you eat the wrong kind of guacamole, you’ll at least be eating it on the right day.