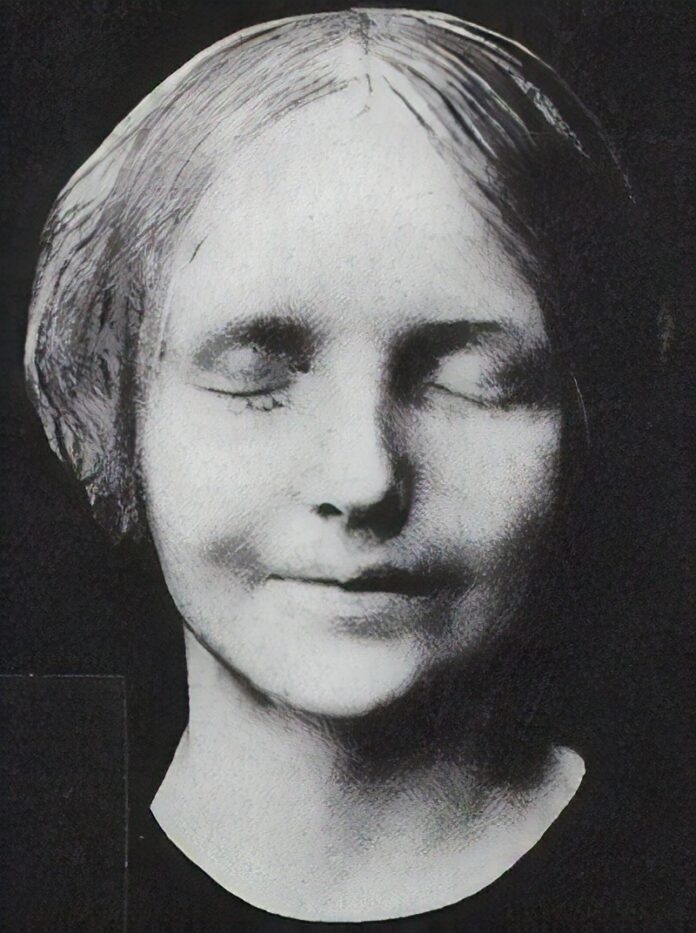 Every year, thousands of tourists visit Paris to see one of the most famous faces in the world—Mona Lisa, or La Joconde as she’s known in France. With her enigmatic smile and serene beauty, the subject of Leonardo da Vinci’s painting has inspired both sincere admiration and endless speculation about her true identity (although most now agree that it is a portrait of Lisa del Giocondo, the wife of a Florentine silk merchant).

While less well known, another image of a woman’s face once similarly fascinated and intrigued those who saw it, and gave rise to theories about its origin. Although her true identity is a mystery, the woman who inspired this image has come to be called “L’Inconnue de la Seine,” or the Unknown Woman of the Seine.

The Face that Launched a Thousand Myths

In keeping with the mysterious background to her story, there are various versions of when it actually began. The most common version holds that it began close to the turn of the 20th century, when the body of a young woman was brought to the Paris morgue after she drowned in the Seine (at that time, unidentified bodies were displayed to the public at the morgue in the hope that someone would recognize and claim them). It was here, the popular story goes, that a staff member was so taken with her beauty that he made a cast of her face, creating a haunting death mask of the young woman. Furthermore, it was said that since the woman bore no obvious wounds, she must have taken her own life, perhaps because of some unrequited love.

Although this romantic version of the story is the most common, there are some who dispute certain aspects of it. Some argue that the hairstyle worn by the woman dates to an earlier time, asserting that the mask was made sometime between the mid-1800s and the early 1880s. Others claim that the woman depicted in the mask was not a drowning victim at all, and was actually alive when the mask was taken. Whatever the case, it is true that around the turn of the 20th century, copies of the so-called death mask began appearing in shops in France and Germany, and soon became highly popular objets d’art.

The key to the growing appeal of the mask was not merely the beauty of the model, but the pleasant smile captured by the cast-maker that seemed so at odds with the reputed tragic circumstances of her death. L’Inconnue, as she came to be known, served as the muse to numerous writers who were inspired to imagine what lay behind the smile, and sought to explain how the young woman had met her fate. From novelists who took the story to dramatic (and perhaps melodramatic) heights, to well-respected writers such as Rainer Maria Rilke and Vladimir Nabokov who made mention of L’Inconnue in their work, the popularity of the image and the story had an immense effect on French and German culture in the 1920s and ’30s. In fact, it has been argued that L’Inconnue became the erotic ideal of the time, causing fashionable young women (and especially aspiring actresses) to try to emulate her innocent beauty.

The popularity of L’Inconnue did begin to wane as the century went on, but her image was revived in the 1960s, thanks to a new development in medical training. In the 1950s, Dr. Peter Safar refined a system of lifesaving techniques that eventually became known as CPR (cardiopulmonary resuscitation), and he recruited a Norwegian toy manufacturer, Asmund Laerdal, to produce a mannequin on which these techniques could be practiced. As he created this mannequin, which he later named Resusci Anne, Laerdal was inspired to give it the face of the young woman who drowned in the Seine, thus allowing CPR trainees to symbolically save her life.

By now, Resusci Anne (or CPR Annie as she is called in the United States), has been “saved” millions of times over, and her face has become known to new generations of admirers. It’s a fitting tribute to L’Inconnue, whoever she may have been, in that her ultimate legacy will not only be tied to tragedy and death, but to compassion and survival.

Note: This is an updated version of an article that originally appeared on Interesting Thing of the Day on March 19, 2008.