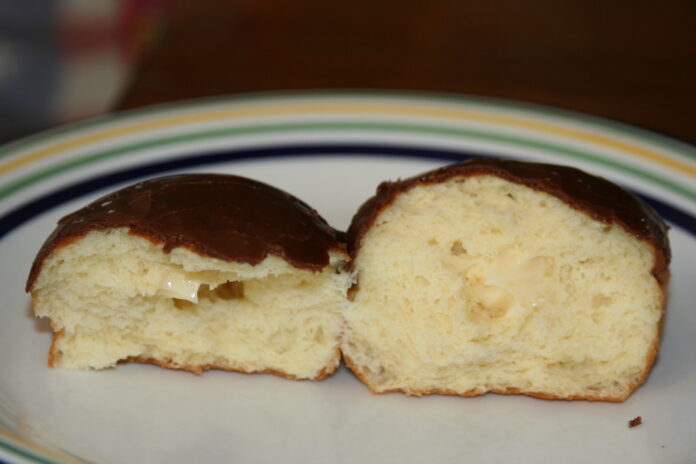 Image credit: By ChildofMidnight. [CC BY 3.0], via Wikimedia Commons

I hate to nitpick, but…we need to have a few words about donuts—and more specifically, cream-filled donuts. One could argue (and indeed, I am about to do so) that a pastry lacking a hole cannot, by definition, be a donut, regardless of any other shared characteristics. Because the hole is the entire point—it’s what makes a donut a donut. Nevertheless, one could also argue (again, here I am arguing) that if you’re looking at a pastry that otherwise meets the criteria for donuthood but has no hole, that pitiful lump of fried dough would be enormously improved with the addition of a sweet, viscous filling. Indeed, more often than not, I’d rate the filled pastry as being superior to, and more desirable than, the pastry containing nothing but a void. That’s why, though my pedantic side objects to the name, I nearly always opt for filled donuts, given the choice. They’re just yummier—anyone can see that.

But about the “cream.” Whipped cream is not the right choice for a donut filling, because it’s too insubstantial. It won’t hold up under the pressure of the surrounding dough for long, and it will collapse into, you know, plain old cream. So what donut vendors usually put inside “cream”-filled donuts is something more like a whipped frosting, which is to say something with a much higher sugar content and little or no actual cream. I find that excessively sweet yet unsatisfying, so for me, the only filling worthy of the term “cream” is in fact custard, which is to say sweetened milk or cream thickened with eggs. Bonus points for chocolate icing (which, in combination with the custard, yields a Boston Cream Donut, a mighty nice confection).