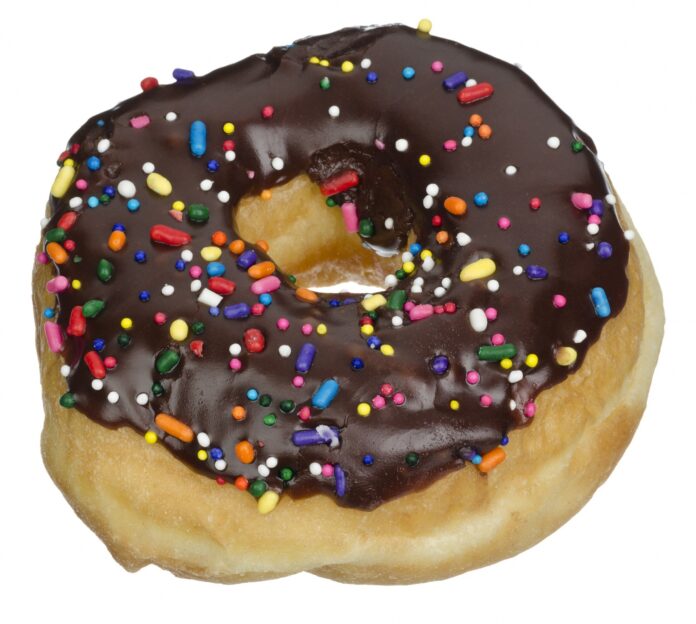 I remember my first encounter with Krispy Kreme. It was back in the mid-1990s, before the chain had expanded to become the phenomenon it is today, and when the only commercial doughnut shop chain I had ever known was Dunkin’ Donuts. At the shop I visited, as at most Krispy Kreme locations, visitors could watch the doughnuts being made; a window ran along the side of the shop where the line formed. I was fascinated by the mechanism that flipped the doughnuts over in the oil when they were half-cooked, and watched in awe as they passed through a curtain of glaze. Although doughnuts are such a simple food, I felt I was watching something magical. Then I tasted one, and was even more impressed. I had never known what a fresh, hot doughnut was like—the difference from what I had experienced before is like that of fresh bread hot from the oven compared to week-old supermarket bread. It was light, soft, perfectly sweet—delicious. I couldn’t understand why Krispy Kreme hadn’t taken over the world yet; of course, it was only to be a matter of time.

When a local newspaper ran an article about the history of doughnuts, it got me wondering how many other things about doughnuts I had been taking for granted all along. I decided to do a bit of research.

From Oily Cakes to Doughnuts

Doughnuts as we know them today originated in the mid-1800s. Their predecessor was the olykoek, a treat Dutch immigrants to the U.S. made by frying the leftover bits of bread dough in hot oil. Exactly how the name “doughnut” came to be used is the subject of some disagreement. According to some sources, the Dutch twisted their dough into knots, hence “dough knots.” Others point out that the olykoeken tended not to cook through in the very middle, so some makers would put nuts in the center (“dough-nuts”) to make them more palatable.

The uncooked centers seem to have been, directly or indirectly, the reason behind the hole. According to several widely diverging accounts, the doughnut hole was apparently the invention of a New England sea captain named Hanson Crockett Gregory (or Hansen Gregory or Mason Crockett Gregory, depending on who you ask) around 1847. Gregory’s mother Elizabeth made olykoeken and sent them with her son on his journeys to sea. The least likely but most colorful version of the story, and therefore the one I like best, is that Gregory needed a place to put his olykoek while he steered the ship, so he impaled it on one of the spokes of the steering wheel. Other sources say that Gregory came up with the idea in a dream or claimed to have received it from angels; some say he simply didn’t like the uncooked centers (or the nuts his mother filled them with) and poked them out; still others say he may have encountered a cake with a hole in the middle during his journeys and decided to adapt the idea to the olykoeken. Whatever Gregory’s real reason for adding the hole, it had the beneficial effect of making the doughnuts cook more evenly, and the idea quickly caught on.

(At the risk of stating the obvious, the doughnuts I’m describing here are the traditional, plain glazed, raised (or yeast) variety. Cake-like doughnuts are simply not real doughnuts, in my opinion, and while I do admit to an occasional hankering for a jelly- or custard-filled doughnut, it has never seemed quite right to me to call them “doughnuts” since they’re not shaped like a ring.)

Nearly thirty years later, in 1872, John Blondell received the first patent for a doughnut cutter. Doughnut technology advanced significantly over the next few decades. By the 1930s, automated doughnut-making machines were producing the treats in huge quantities. And in the 1940s and 1950s, chains like Krispy Kreme and Dunkin’ Donuts sprang up, taking mass-produced doughnuts to the masses. In Canada, meanwhile, the name most often associated with doughnuts is Tim Horton, a former hockey player who lent his name to a nationwide chain of doughnut shops.

Fond though I am of Krispy Kreme doughnuts, I have become increasingly aware that the doughnut illuminati don’t take them seriously. Indeed, with the passage of time, I too have become more discriminating when it comes to my fried dough rings, and I now prefer varieties that are larger, denser, and have unusual flavors. (There’s a place near me called Donut Panic, which—only on certain days of the week—makes these amazing vegan raised donuts with a texture you have to taste to appreciate. Among the many flavors they offer is maple bacon, which give me joy not only because they taste great, but also because of the delicious irony that the shop apparently considers bacon a vegan ingredient.)

From Doughnut to Donut

Alert readers may have noticed that a couple of sentences ago, I used the spelling “donut,” dropping the unnecessary and unpronounced extra letters. Inasmuch as donuts are made of, and derive their name from, dough, there’s an obvious argument to maintain that etymological continuity and leave in the extra letters. The dictionary tells me “donut” is a “less-common spelling of doughnut,” and that may be, but I’d like to make it more common. And I have some support in this from the very same dictionary, which tells me that donut is a “fully accepted spelling.” It’s certainly becoming more common—especially as brands using the “donut” spelling proliferate—and so much less fussy, as befits a simple ring of, you know, do. (Ugh.)

Note: This is an updated version of an article that originally appeared on Interesting Thing of the Day on September 21, 2004.