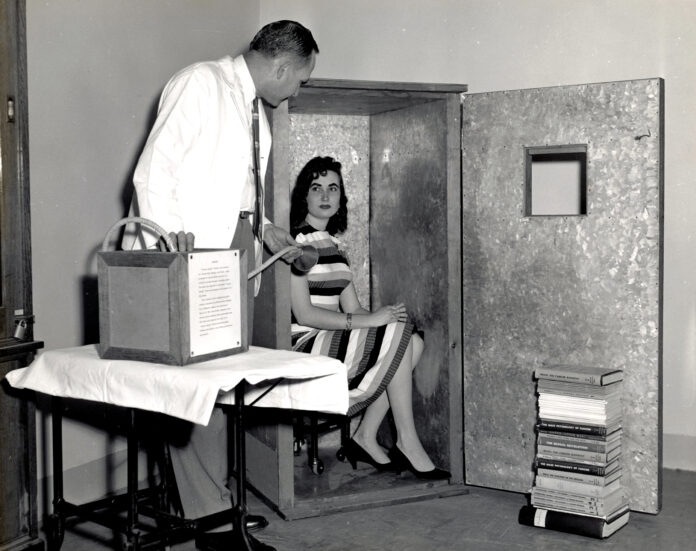 Back when I first wrote about Sedona’s energy vortexes in April 2003, a friend of mine said I should look into something called “orgone”—apparently some sort of healing energy discovered by a certain Dr. Wilhelm Reich. I spent a couple of hours reading the websites my friend recommended, by the end of which time I was completely baffled. I had read things about alien encounters, inscrutable contraptions that were supposed to impart various vague health benefits, and other claims so bizarre that I simply couldn’t make any sense of them. The material was so opaque and confusing that I couldn’t even produce a coherent definition of orgone, much less write an article on the subject. Many months later, after my article on the Egely Wheel, the same friend again suggested I write about orgone, so I once again spent some time on the web, trying to make heads or tails of it. Again, I failed. Then one day, I happened to notice an old article Cecil Adams had written in The Straight Dope about Reich and his theories. The quote that caught my eye was right at the beginning of the article: “Reich was a nut.” At last, a clear and concise statement I could comprehend! Perhaps there was hope after all—I just needed to look in the right places.

Now, of course, I’ve biased you already: you’re going to think that what I’m about to describe is pure hogwash. And frankly, I think you’ll be right. As much as I try to maintain an open mind—and a charitable attitude toward those with beliefs much different from my own—I have my limits. But the story of orgone, despite its dubious claims, is nevertheless quite interesting.

The Force May Be With You

Wilhelm Reich was born in Austria in 1897. As an adult he became a psychoanalyst—a friend and colleague of Freud, in fact. In the late 1930s, as a result of his research in psychiatry, Reich claims to have discovered a type of energy he labeled “orgone” (pronounced “ORG-own,” not “OR-gone,” by the way). He believed it was a kind of life force, a “primordial cosmic energy” that permeates the entire universe. Within the body, he claimed, a good flow of orgone produced health, while blockages produced disease. In those terms, it sounds very much like the Chinese notion of ch’i (or qi), a sort of internal energy. But Reich, who related the notion of orgone in its physiological context to the libido, took the concept much further.

All matter in the universe, he claimed—both animate and inanimate—came from orgone, and orgone is responsible for life. Orgone is even, supposedly, what gives the sky its color. By constructing a box made of alternating layers of metal and organic matter, Reich made what he called an “orgone energy accumulator.” Sitting in one of these boxes allegedly cured (or at least improved) conditions ranging from depression to skin burns to cancer. Reich also made machines he called cloudbusters, which could allegedly either produce or inhibit clouds and rain.

Orgone with the Wind

None of these claims, of course, was ever proven in a way satisfactory to the scientific or medical establishment. Reich’s position was that conventional scientific instruments simply were not designed to detect or measure orgone. By the 1950s, when Reich was living in Maine, his work drew the attention of various U.S. government agencies, which investigated his work extensively over a period of several years. Of particular concern were Reich’s claims that his devices produced medical benefits. After disobeying a court order to refrain from shipping his products across state lines, Reich was convicted of contempt of court and sent to prison, where he died of a heart attack the following year.

Reich and his supporters felt—justifiably, it seems—that the government persecuted him far out of proportion to his actions (going so far as to confiscate and destroy much of his equipment and notes). The intense crackdown also had the unfortunate effect of making Reich a martyr of sorts—people believed he must have been on to something incredibly important to arouse such a passionate response from the government. In the years since Reich’s death, incredibly, the “science” of orgonomy has attracted a significant number of followers, many of them credentialed physicians. There are orgonomic societies, conferences on orgonomy, and even an American College of Orgonomy, which trains and certifies members in “medical orgone therapy.” Although there are plenty of true believers, there is still no proof that such a thing as orgone exists.

Note: This is an updated version of an article that originally appeared on Interesting Thing of the Day on March 31, 2005.