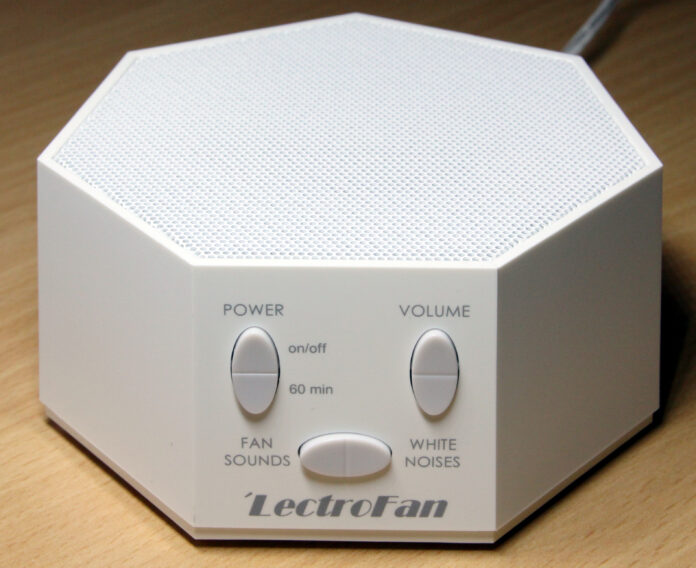 During the summers when I was growing up, my bedroom had an air conditioner mounted in the window. I loved the hot nights when I got to turn it on, but only partially because it cooled the room. What I liked best was the sound, which I found to be very soothing. Years later, when I was in college, I had a classmate everyone made fun of because he couldn’t go to sleep without having a radio on next to his bed—playing static. For some reason, the sound of static on a radio seemed goofy in a way that the sound of an air conditioner did not, but they amounted to roughly the same thing: white noise, which has a well-known ability to promote sleep by masking other sounds.

If you think back to elementary-school science classes, you probably learned that white light is a combination of all the other colors of light; using a prism, we can separate it into its component colors. By analogy, “white” noise is composed of sounds of every frequency within the range of human hearing—roughly 20 to 20,000Hz (cycles per second)—with each part of the frequency spectrum equal in amplitude (volume). It’s called “noise” instead of “sound” because it is random in nature. Rather than simply generating a fixed tone at 20Hz, 21Hz, 22Hz, and so on all the way up to 20,000Hz, a white noise generator creates a constantly changing mixture of tones such that all frequencies have an equal probability of being audible at any given moment.

To human ears, white noise sounds like a hiss—sounds such as a waterfall, an aerosol can, and static are all similar to white noise. Although all frequencies are represented, we perceive white noise as being relatively high-pitched—partly because higher octaves consist of a greater range of frequencies than lower ones (giving the higher-frequency sounds proportionally more energy), and partly because our ears are more sensitive to higher-pitched sounds.

White noise is good at masking most other kinds of sound because it effectively overloads or “numbs” our auditory systems. Just as it’s difficult to hold a conversation at a crowded restaurant, it’s difficult for your brain to identify any one sound or voice when you’re already hearing sound at every frequency. So it’s not the white noise itself that promotes sleep as much as the fact that it reduces audio clutter, drowning out other sounds that may distract you and therefore keep you awake.

The Color of Sound

If “white” noise includes sound at every frequency, you might imagine it would be possible to create other “colors” of noise by emphasizing certain ranges of frequencies over others. And you’d be right. There is such a thing as pink noise, as well as red, orange, green, blue, purple, gray, brown, and even black noise. Of these, pink noise is the most common—and the most clearly defined. Whereas white noise has equal energy at every frequency, pink noise has equal energy within each octave—in other words, the amplitude at higher frequencies is reduced to make it sound more balanced to the human ear. Pink noise is used for, among other things, calibrating speaker systems. The term “pink” signifies that it’s like white, but “tinted” or weighted toward the lower-frequency (and therefore longer-wavelength) sounds. However, not all of the so-called noise colors map onto the visible spectrum so clearly—and in any case, the color names are nothing more than a convenient metaphor to describe white noise that has been filtered in various ways.

Many of the products claiming to produce white noise are recordings or simulations of wind, waves, and other sounds that are in reality quite a bit more complex than white noise. Not that there’s anything wrong with that—the sound of rain on the roof can be very soothing and can have most of the same masking benefits as white noise. And just as the term “white noise” can be stretched somewhat in meaning to include what you might call “off-white” noise, it also can have a more metaphorical sense, as in “meaningless chatter.” But what I’d like to hear is a recording that sounds just like my old air conditioner—complete with the hum that the compressor made every time it came on. For me, that would beat a melatonin tablet washed down with a glass of warm milk.

Note: This is an updated version of an article that originally appeared on Interesting Thing of the Day on October 16, 2004.