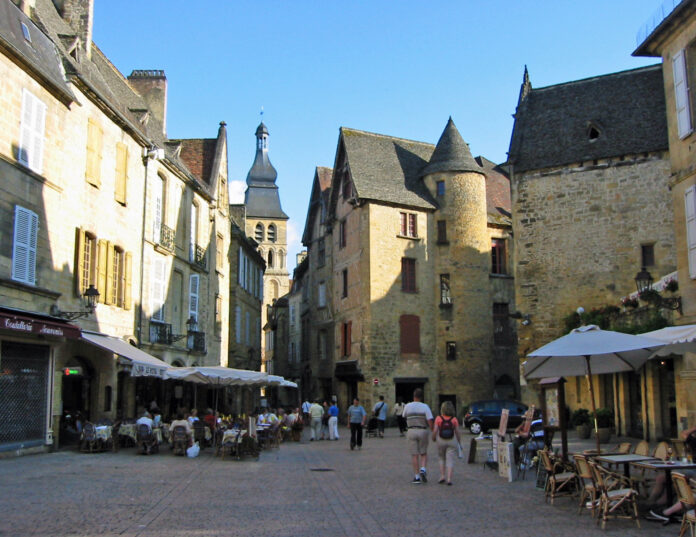 Back in the day, I was in the habit of reading every new Michael Crichton novel as soon as it was released. I liked the stories, but what appealed to me more was the depth of historical and scientific research he put into his work. It’s often had to tell where reality ends and fiction begins, which I’m sure is exactly what he was aiming for. Given my fondness for France, I was especially interested in his book Timeline, published in 1999 (and made into a disappointingly forgettable movie in 2003). Most of the book’s action takes place in the Dordogne river valley in southwestern France—partly in the 14th century and partly in the 20th. In particular, Crichton’s description of the town of Sarlat caught my attention. It’s the site of just one minor scene and is only given a passing mention. But what the book describes is a quaint town preserved as it was in medieval times—a place full of history and character. Guidebooks generally speak highly of the town too, and I thought it sounded like a great place to visit. On our first trip to France, in 2000, our schedule did not permit an excursion to Sarlat, but Morgen and I decided we’d do our best to go there the next time we were in the area.

Getting There Is Half the Fun

In June of 2003 we returned to France on vacation, and we hoped once again to visit Sarlat. We had left the last week of our trip deliberately unplanned to allow ourselves the option of doing whatever seemed most interesting at the time. When it finally came time to choose where to go, we were in the French Alps (on the east side of the country near the Swiss border). We discussed Sarlat as one of several options for our final destination. The friends we were staying with tried to talk us out of it. “It’s really touristy,” they said, “and very hard to get to. We can recommend lots of places you’d enjoy more.” So we agonized over the decision for a long time, but finally agreed that we wanted to go with our first choice, touristy or not. We went to the train station to figure out how to get there. When the ticket agent heard “Sarlat,” he rolled his eyes and sighed as if to say, “You can’t get there from here.” Actually that would have been an overstatement. You can get to Sarlat from the French Alps, but it would have required taking five different trains and a bus—a trip lasting about 12 hours in total (and not an inexpensive one either). We decided to rent a car instead.

Our trip across France by car took almost as long as it would have by train, as most of it involved twisty mountain roads. It was hot, too, and our car didn’t have air conditioning. By the time we drove into Sarlat, it was nearly 10 p.m., the time at which, we had been told, the front desk of the hotel where we were staying would close. We didn’t have a good map of the town, so we drove around searching for a while, and by the time we finally found our hotel (at 9:59 p.m.), we were tired and grumpy. And hungry too. Our first task after checking in was to find some food, which turned out to be very difficult because none of the restaurants were still serving dinner at that hour. After being rebuffed by a particularly snooty waitress, we finally found a pizzeria that consented, with some reluctance, to make us a pizza if we agreed not to eat it on the premises. When we got back to our room, pizza in hand, we were not feeling very favorably disposed toward Sarlat.

The next morning, however, we did our best to approach the rest of our stay with an open mind. My top priority of the day was finding internet access, as I had some urgent business to attend to. For being a medieval town, there were plenty of cybercafés (at least three that I saw), which nicely boosted both my spirits and my impressions of Sarlat. I easily dispatched my correspondence and a pastry. With work out of the way for the moment, we set about exploring the town.

What we had read about Sarlat-la-Canéda (the full name of the town, which is rarely used except on maps) was that, of all the towns in France, it was the one that looked most nearly as it would have in the 14th century. (That is to say, the old part of Sarlat, which had once been a walled city, looked that way—the outlying areas were just as suburban-looking as anywhere else.) Except for the central main street, the town was car-free and pedestrian-friendly—always a plus in my book. In addition, the signs of modern infrastructure—streetlights, neon signs, electric wires, and so on—were kept to an absolute minimum, or at least hidden. And most importantly, nearly all the architecture was preserved to look just as it did centuries ago. In all these ways Sarlat lived up to its hype, giving a fairly convincing illusion of stepping back in time. Fortunately, the effect was not so complete as to include, for example, raw sewage flowing in the streets or plague-infested rats, but it was close enough.

The history of Sarlat can be traced back to at least the ninth century CE, when a Benedictine abbey was founded there (later to be replaced by a cathedral, which is still in use). During the 13th through 16th centuries, Sarlat was prominently involved in a series of notorious conflicts and religious wars, not to mention a succession of natural disasters such as floods, plague, and famine. From the 17th century to the middle of the 20th century, Sarlat was largely overlooked by modern development and fell into a state of decay and disrepair. But thanks to a 1962 ordinance called the Malraux Act, it was designated a “protected area” and soon underwent massive renovation work. The result is a modern town that looks centuries old, but in fact is far more lovely and livable than it really was in medieval days.

I was aware that the Périgord, as the French refer to the Dordogne region, was an area known for its foie gras, and I’d heard that that local producers delight in giving public demonstrations of force-feeding geese and ducks to plump up their livers. But I was unprepared to find that virtually every second shop in the old town was a foie gras shop. This is barely an exaggeration. In a town with perhaps a hundred retail establishments in all, there were dozens of stores that specialized in foie gras, each with a nearly identical window display beckoning to tourists that theirs was the best, the most authentic, or the least expensive foie gras in town. It would be like going to a mall in the United States and finding 20 Mrs. Fields shops—however much you like the product, you can’t help thinking the market saturation point was passed long ago.

Were there lots of tourists in Sarlat? You bet. But strangely, this didn’t bother me much, perhaps because I thought the town was authentic enough to merit the attention—that it wasn’t a cheap, Disney-style tourism. Or it could just be that given enough wine and foie gras, nothing will bother me. Sarlat is not the prettiest town in the region. Nearby Beynac, for example, with its majestic cliff-top castle overlooking the Dordogne is postcard-perfect, and you could spend weeks in the Périgord hopping from château to scenic château. But for sheer medieval character, nothing beats the coziness of Sarlat.

Note: This is an updated version of an article that originally appeared on Interesting Thing of the Day on September 4, 2003, and again in a slightly revised form on November 1, 2004.