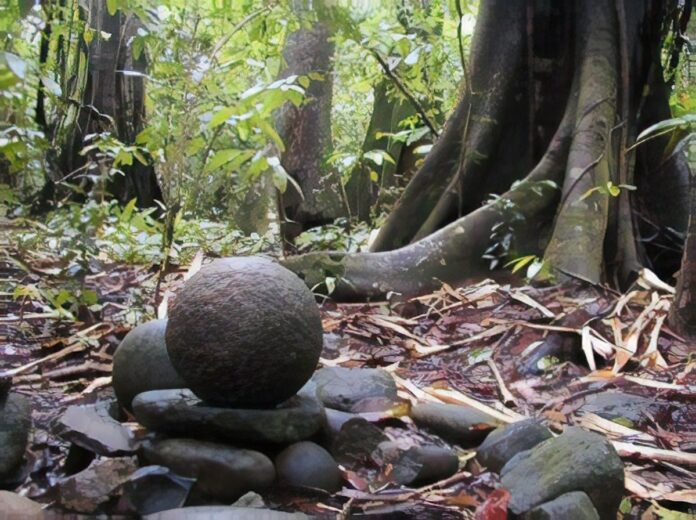 When I was last in Costa Rica, I was on the lookout, as usual, for interesting things. And I found plenty of them: sloths, leaf cutter ants, poison dart frogs, volcanoes, and so on. I was not, however, on the lookout for lawn ornaments, under the assumption that decorative stone sculptures were not particularly interesting. I should have known better than to make such an assumption—after all, I saw Amélie, which cast an entirely new light on garden gnomes. Shortly before the end of my trip, a fellow tourist asked me if I knew about the stone balls. “What stone balls?” I asked. “There are these mysterious ancient balls,” he said, “that are so perfectly round, they could not have been carved by hand. Nobody knows where they came from or how they were made, but they’re scattered all over the country, and people like to find them and use them as lawn ornaments.” Sure enough, as we drove along, I spotted stone balls in a few yards, but I didn’t have a chance to photograph one. It seemed strange to me that artifacts with such obvious archeological significance would end up as the Costa Rican equivalent of plastic pink flamingos.

Rolling With the Bunches

The first discovery of the unusual stone balls was made around 1940. The United Fruit Company was preparing large tracts of land in the Diquis Delta on the southern Pacific coast to be used for banana plantations. In the process of clearing the land, they unearthed several dozen balls, ranging in size from a few centimeters to over two meters in diameter. Subsequent archeological research identified and catalogued hundreds of the balls, some of which appeared in other parts of the country. As news of the find began to spread, the balls were rounded up (sorry) by collectors and treasure hunters; today, only six are known to remain in their original positions.

No one knows exactly how old the balls are, because Costa Rica had no recorded history before 1502, when Columbus arrived there on his fourth transatlantic voyage. Archeologists have made educated guesses by dating pottery and other artifacts found near the balls or buried at a similar depth. Assuming the balls were made at about the same time as the surrounding objects, they could have been carved anywhere between 200 and 1500 CE, with most estimates in the range of 800 to 1200 CE. So they’re old, but not that old—unlike, say, the pyramids or Stonehenge.

Most of the balls are made of a hard, volcanic stone called granodiorite, though a few are composed of coquina, a type of limestone. The quarry from which the granodiorite came is located in the Talamanca mountain range, about 50 miles (80km) from the area where the balls were located. This discovery of course led to speculation as to how such massive stones could have been moved such a long distance without modern transportation. I see no mystery here; spherical objects have been known to roll rather readily, especially downhill; presumably they were carved before being moved.

There are, however, two very interesting questions about the balls: How were they made, and why?

Round, Round, Get Around

There’s nothing particularly tricky about carving stone; many ancient cultures all over the world made complex statues. But according to some accounts, these spheres are so perfectly round that not even modern equipment could have produced something with such precise tolerances. This seems to imply either a lost technology, or—as some have predictably conjectured—help from aliens. These claims of perfection have some problems, however. For one thing, few of the balls have actually been measured with any precision, and in some cases, measurements that appeared to be mysteriously perfect were made on only a portion of a partially buried ball. For another thing, many of the balls have been subjected to centuries of wear and erosion from sunlight, wind, and rain, so no meaningful statements can be made about how round they might once have been. And even the best specimens have (and probably always had) rough surfaces, making truly precise measurement a lost cause.

That said, it is certainly true that at least some of the balls, having been preserved nicely over the years by layers of soil, are surprisingly round. This fact, interesting though it may be, does not require a belief in extraterrestrials. Geologists have noted that when granodiorite is heated and then quickly cooled, a thin layer of stone comes off in flakes. It’s simple enough to pile some hot coals under a rock and then splash some cold water on it. If this procedure is performed repeatedly and with care, a fair approximation of a sphere can result. The stones could then have been chiseled or ground to a more perfect ball shape using simple guides fashioned from wood or even rope. It would have been difficult and tedious, for sure, and would have required a fair amount of mathematical sophistication on the part of the carvers. Thus the precision is interesting—perhaps even astonishing—but not unbelievable.

My, What Big…Ornaments You Have

The only real mystery, then—and it’s a doozy—is why so many of these extraordinary sculptures were created. Dozens of reasons have been advanced, but in the absence of written records, there’s no way to say for sure. One popular theory is that they were used as markers of some sort—as signposts, celestial references, or indicators of property lines. Unfortunately, if this was indeed the case, we’ll never know, since nearly all the stones have been moved from their original positions. Some people believe the stones functioned as antennae in an ancient power grid, or that they were part of a receiver for alien communications. Or they may have had ceremonial significance in religious rituals. My favorite theory, however, is the one that says they were created as status symbols. In other words, they were in fact designed to be the lawn ornaments they now are.

Besides the fact that most of the spheres have lost any positional meaning they may once have had, many have been damaged by agricultural machinery, worn away by the elements, or even destroyed by people who believed a popular myth that gold was hidden inside them. So they are, in a sense, yet another addition to Costa Rica’s endangered species list.

Note: This is an updated version of an article that originally appeared on Interesting Thing of the Day on August 26, 2003, and again in a slightly revised form on March 8, 2005.