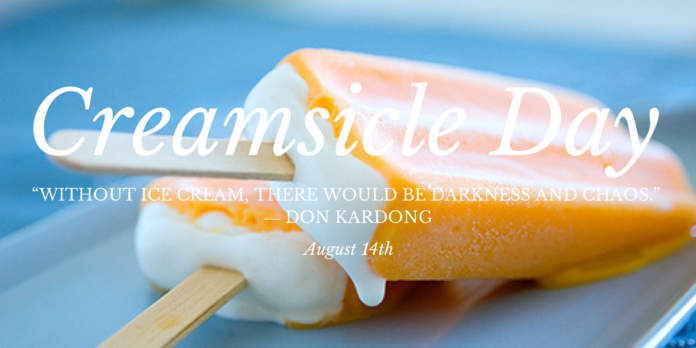 Vanilla ice cream is OK. Not especially exciting. Vanilla ice cream on a stick is that, plus convenience. Many purveyors of vanilla ice cream on a stick do the right thing, which is to dip it in chocolate. Maybe add some nuts or crisped rice. Hey, maybe even put some chocolate in the center too! That makes the apparatus considerably more than OK. Other people…well, some weirdos think that covering the vanilla ice cream in a fruit-flavored ice (basically, the same stuff in a Popsicle) is a good idea, and of those, some über-weirdos think that orange is the optimal flavor of said ice covering. Indeed, there are so many such weirdos that today is just for them: it’s National Creamsicle Day. Not that I have any judgement about that, except that it’s wrong. If you’re offered a creamsicle today, you have my permission to scrape off the fruit coating and dip it in chocolate.