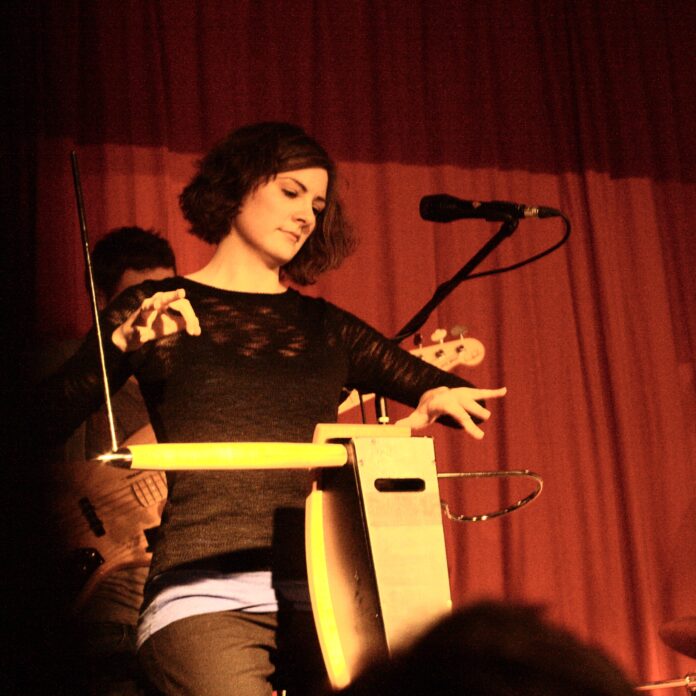 As an amateur synthesist, I have always been intrigued by electronic means of creating sounds. Normally I work with buttons, sliders, and keys on modern digital equipment, every parameter conveniently shown on a digital display of some kind. Long before computer-based, programmable synthesizers, though, there were analog synthesizers that were “programmed” by stringing patch cords across a panel that looked like an old-fashioned telephone switchboard and fiddling with dozens of twitchy knobs. But these early modular synthesizers were still not the beginning of electronic music. Go back a few decades further and you find a device with such a stunningly elegant user interface that it could be played without even touching it. Meet the theremin, the world’s first electronic musical instrument.

Just a Bunch of Hand Waving

The theremin was invented by a Russian engineer named Lev Sergeivitch Termen (whose name was later anglicized to Leon Theremin). Termen was doing research involving vacuum tubes for the Russian government. At one point during his experiments, in which he happened to have headphones hooked up to his measuring equipment, he noticed that his own proximity to the tubes affected the pitch of the sound he was hearing. Although this was completely tangential to his research, the effect interested him; as a trained cellist, he soon found that he could play tunes on his laboratory apparatus simply by changing the position of his body. Termen began to explore not only the theory behind the capacitive sensor he had just stumbled upon, but also the mechanisms for creating musical tones electronically. He began building machines whose sole purpose was to translate gestures into sounds. Accounts vary as to when the first prototype instrument was created, but it was some time between 1917 and 1920, with the first public demonstration held in 1921.

Termen received patents for his device in both Russia and the United States, and in 1929 RCA began production of the first commercial model, then known as a “thereminvox.” The original theremin looked like nothing so much as a lectern: a sloped wooden box on a pedestal. Protruding from the left side of the box was an oblong loop of metal tubing that functioned as an antenna; a second, straight antenna rose vertically from the upper right corner of the box. Sound came from a built-in speaker.

The player stands back slightly from the theremin with arms outstretched—one near each antenna. To play it, one simply changes the proximity of the hands to the antennas. The horizontal loop controls volume—move your left hand closer, the volume decreases, move away, the volume increases. The vertical antenna is responsible for pitch. Move your right hand closer, the pitch goes up; farther away, the pitch goes down. By making subtle, carefully synchronized movements, players can produce all sorts of effects to enhance the basic tones.

Sounds From the Ether

The basic sound of a theremin has been described as being similar to a musical saw, a flute, musical wine glasses, or even a human voice. In reality, the classic, unmodified sound is pretty close to a plain sine wave, but skillful manipulations of pitch and volume produce effects that can sound like the soothing vibrato of a mellow voice, a harsh shriek, or anything in between. In any case, the sound is monophonic—just one note plays at any given time—and it is a continuous sound, always sliding upward or downward in pitch rather than jumping discretely from one note to another. So it’s impossible to play staccato notes on a theremin, though expert theremin players can move between notes so quickly and smoothly that the portamento effect is not noticeable. The theremin’s sound has an ethereal, spooky quality, which made it ideal for soundtracks of science-fiction and horror shows during the middle part of the 20th century.

Though the original RCA theremins have been out of production for decades, Moog Music, the company founded by legendary synthesizer inventor Robert Moog, still sells several compact, solid-state theremin models, including one (the Theramini) equipped with MIDI (Musical Instrument Digital Interface), meaning it can be used as a controller for other sound sources such as synthesizers or samplers—or, conversely, produce sounds when triggered by a keyboard, guitar, or other controller.

You’re not likely to hear an all-theremin concert, but there are modern classical and jazz pieces written for theremin (in some cases, along with a piano or even an orchestra), so theremins do pop up in serious concert halls on occasion. In addition, numerous bands and other performers use theremins in their acts from time to time. Several years ago we saw magicians Penn & Teller in Las Vegas, and as part of the show Teller played a theremin solo from the side of the stage. There are tons of theremin videos on YouTube (this one is a terrific example), and numerous sites for enthusiasts.

If you’d like to play a theremin yourself, you may be lucky enough to find one on display at a science or art museum, or—more rarely—at a large music store. For a few hundred dollars or so you can buy a modern electronic model for yourself (the original wooden, tube-based theremins are extremely valuable antiques). Theremin-like devices that use other technologies, such as sonar, to determine your hands’ positions exist too. There are also plans and kits available from numerous sources if you want to build your own theremin. Of course, having a working theremin is no different by itself from having a working piano—although anyone can walk up to it and make some noise, it takes a lot of training and practice to become proficient. But even though the theremin is unsophisticated by today’s standards, there is still something deeply satisfying about making music just by moving your hands. Whether you like pretending to be a conductor or a sorcerer, a theremin gives your gestures a fascinating soundtrack.

Note: This is an updated version of an article that originally appeared on Interesting Thing of the Day on June 27, 2003, and again in a slightly revised form on August 31, 2004.