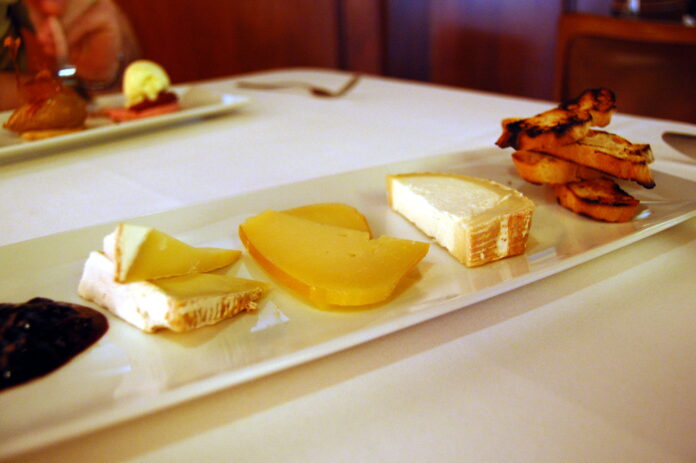 A number of years ago I stumbled upon the rather disturbing statistic that more than half the cheese consumed in the United States is American cheese. Yes, I know, this is tautologically true in that anything made in America is, ipso facto, American—but I’m talking about the particular dairy product that goes by the name “American cheese.” For readers outside North America, let me explain what this is. By law, American cheese must be labeled as a “pasteurized process cheese product” or words to that effect. To make it, manufacturers start with some innocent mild cheddar cheese, shred it up, heat it, mix it with water and emulsifiers, add some food coloring, and form it into a block—or, more often, individually plastic-wrapped slices. The net result is a shiny, rubbery substance that looks, from a distance, somewhat like cheese. When it’s melted it even tastes approximately like melted cheese. In fact this is the major selling point for American cheese: it melts smoothly without separating, making it easier to cook with than cheddar or most other varieties of cheese.

Why do I find it disturbing that Americans eat so much American cheese? It’s because American cheese was responsible for turning me off to cheese all through my childhood. When I was a youngster, if you had asked me whether I liked cheese, I would have given an unambiguous “no”—I had tried it once or twice and was quite certain it belonged in the “yucky” list right along with leafy green vegetables. And yet, as my parents were quick to point out, my favorite dish was macaroni and cheese. This seeming contradiction was due to the fact that the only cheese I’d ever tried in its unmelted form was American (or its close cousin Velveeta). The texture, flavor, and aroma of American cheese—though all rather bland—struck me as utterly gross, and if that’s what cheese was, I wanted no part of it unless it was sufficiently doctored to hide its true nature. Only much later did I discover that what I’d been calling cheese all my life would have been barely recognizable as such in most of the world.

By the time I was in college, I had begun to reconcile with cheese, going so far as to put cubed mozzarella or cheddar on my salads, or munching cheese-topped crackers at parties. Then I began reading stories about life in France and encountered the curious notion of a cheese course—a commonplace part of a meal consisting, apparently, of nothing but cheese. I thought this was quite strange and slightly troubling, but the idea gradually grew on me. I started sampling unfamiliar varieties of cheese such as Brie and chèvre, and shockingly enough, I didn’t hate them. Now, after a five-year sojourn in France, I find myself wondering how I spent so many years routinely eating cheese-less meals. It just doesn’t seem civilized.

In most parts of France, a traditional meal includes, at the very least, an entrée (what North Americans would call an appetizer), a main dish, and a cheese course—the latter either before, or in lieu of, dessert. Depending on where you go, what the local specialties are, and other seemingly random variables such as the phase of the moon, a cheese course may consist of anything from a single small round of cheese to a plate with three or four varieties—or even a large cart with dozens of selections from which you can choose whatever suits your tastes.

A cheese course is often served with fresh bread, such as a sliced baguette—never crackers—and sometimes with fruit or nuts. But it’s equally valid to serve cheese entirely on its own, at least if it’s of a variety that has sufficient coherency to survive the trip from plate to mouth on a fork. When serving more than one cheese in a cheese course, it’s customary to provide contrasts—softer and harder types, milder and more pungent varieties, and so on. Fancier dining establishments will carefully choose a wine (or even multiple wines) to pair with your cheese, and entire meals of cheese are not unheard of.

The cheese course is not a phenomenon limited to restaurants, either. French families may serve numerous cheeses with dinner, even when not trying to impress guests. But you’re unlikely to encounter cheese as a breakfast choice in France—that would be gauche at best (for reasons I, as a non-French person, can’t entirely comprehend). In other European countries, however, cheese is appropriate for any meal, though not necessarily served as a separate course.

In recent years, the cheese course trend has been catching on in North America as well. But here, cheese courses usually appear only at expensive French restaurants, and usually at an additional cost, whereas in France even an inexpensive prix fixe menu at a local café nearly always includes cheese, at least as an option in place of dessert. And in fact cheese courses make the most sense in the context of a planned, multi-course meal in which the other courses are kept to a modest size. If you’ve just stuffed yourself with a meal of typically American portions, you’re unlikely to have room for cheese afterward.

Adding cheese courses to meals you serve at home is quite easy, as long as you do a bit of planning. There are plenty of books and websites that offer advice on selecting from among the many hundreds of cheeses produced in various parts of the world (not to mention recommended wines to accompany them), but it doesn’t have to be that complicated. It’s an art, not a science. Pick out two or three cheeses that look interesting, put them on a plate, and voilà! When selecting cheeses, the best results can be obtained by visiting a cheese shop, where someone knowledgeable can help you to make an appropriate choice. My advice: avoid anything that’s shrink-wrapped and focus on cheeses that look as though some human may have been involved in their production. Contrary to popular wisdom, you generally don’t need special implements or utensils if you don’t already have them.

I’m happy to say that my relationship with cheese has improved a great deal since my childhood. As with wines, I’m no connoisseur, but I have developed enough basic cheese knowledge to tell what I like. Words like “Asiago” and “Camembert” now describe meaningful categories for me, just as “Bordeaux” and “Cabernet” do. Alas, the category “pasteurized process cheese product” has also taken on new meaning, one I try not to think about too often.

Note: This is an updated version of an article that originally appeared on Interesting Thing of the Day on June 23, 2003, and again in a slightly revised form on June 18, 2004.