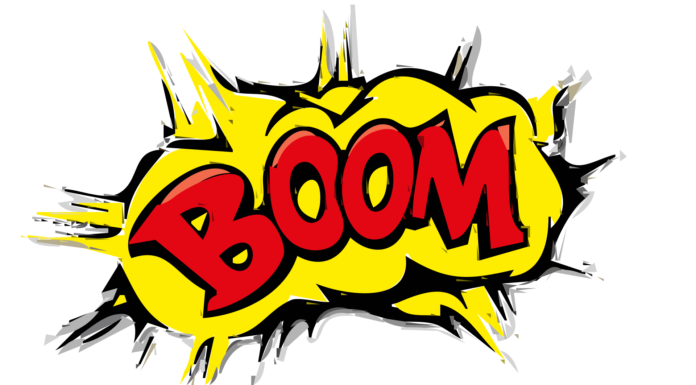 On a few evenings when we were living in San Francisco, we were startled to hear a long succession of enormously loud booming noises. We went outside to investigate. The sky was clear, we didn’t see any lights to suggest explosions, and everyone seemed to be going about their business without worrying about the strange sounds, so we presumed we were simply unaware of some normal occurrence. The source, on further investigation, turned out to be fireworks. What amazed us, though, was that the spot where these fireworks were being set off was miles away from us and over a hill—far enough that we couldn’t catch even a glimpse—and yet from the volume we would have thought they were going off right over our heads.

Today’s interesting thing is a phenomenon consisting of similarly mysterious booming noises, but without such a ready explanation. They’re sometimes called “skyquakes” or “mystery booms,” but I far prefer an earlier and more colorful term: mistpouffers (spelled “mistpoeffers” in Belgium and the Netherlands). In various areas they go by such diverse names as “Guns of the Seneca” (near Seneca Lake and Cayuga Lake in New York), “Barisal guns” (in Bangladesh), “uminari” (in Japan), “fog guns,” “lake guns,” and many others. In all these instances, the terms describe a sound or series of sounds that resemble loud but distant cannon fire, usually heard near the edge of a large body of water. The sounds occur when there are no storms in the vicinity that could produce thunder and no other obvious source. Sometimes they’re accompanied by a rumble that can be felt strongly enough to shake plates and hanging pictures; other times no vibration is felt.

The fact that such sounds have been reported for centuries means that proposed explanations such as artillery tests and sonic booms are not entirely satisfying. Earthquakes and volcanoes, on the other hand, can certainly produce loud booming sounds. If the atmospheric conditions are right and the sound is loud enough, it can travel enormous distances; the 1883 eruption of Krakatoa in Indonesia was heard at least 3,000 miles (4,800km) away. However, one would expect that if seismic activity were the cause, it would be on a newsworthy scale, and therefore easily connectable to the sounds. That doesn’t seem to be the case with mistpouffers, and they’re also too frequent to make this a really good answer.

I’ve read a number of theories having to do with escaping gases, the idea being that for one reason or another a giant gas bubble is released from the sea floor, floats up to the surface, and then makes a huge “pop”; this is thought to explain why the sounds are usually heard near water and results in the evocative name “lake farts.” The gas-bubble idea strikes me as distinctly silly. If this were truly the cause, surely there’d be innumerable reports of people sighting such bubbles popping on the water’s surface—passengers in nearby ships would be stunned by the noise—and that would be that. But the bubble theory is pure speculation, and I have some difficulty imagining the sound of even the largest bubble breaking the surface of a lake or ocean sounding like a cannon or gunfire.

Likewise, I’ve seen in several places the claim that the reason these sounds are heard primarily near water is that “inland communities are too noisy,” as if to suggest that the noises actually occur anywhere and everywhere, but only places near water are quiet enough so that people can hear them. I don’t know, I’ve been to some awfully noisy coastal towns and some deathly quiet inland spots, so that idea doesn’t quite work for me. It does make sense, though, that sounds would travel farther over water than over land simply because there are fewer obstacles.

The leading theory about the sounds is disappointingly mundane: the source is thought to be thunder (or, in some cases, explosions of one sort or another) whose sound travels a long way simply because atmospheric and topographic conditions happen to be just right. This seems eminently plausible: if a volcano could be heard thousands of miles away, undoubtedly the sound from a thunderstorm far out over the sea could carry from beyond the horizon. There is a bunch of math and atmospheric science that seems to support this explanation, and while the details are a bit opaque to me, I feel confident that we need not appeal to invisible alien spacecraft, the footsteps of the gods, or other such fanciful causes.

However, through careful research I believe I have uncovered an even better explanation. A webpage describing the many tourist attractions of the Cayuga Lake area mentions the “Guns of the Seneca.” Later on the page is this comment: “At the southern end, you’ll find the booming city of Ithaca…” Well, there you have it. What local residents are hearing is obviously the sound of Ithaca booming. Another mystery bites the dust!

Note: This is an updated version of an article that originally appeared on Interesting Thing of the Day on July 25, 2007.