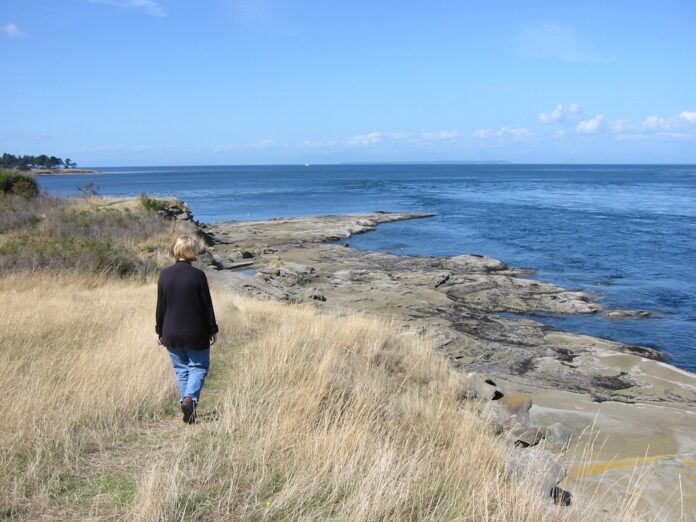 I have a special fondness for contradiction—or more accurately, contrariety—the apparent not-going-together of things I like or believe equally. Read enough of these articles and the theme of paradox will be quite evident. For example, I love living in the city, and can’t imagine being without the energy, resources, and constant stimulation it provides. But I could say with equal conviction that I’m happiest when I’m far away from people, noise, and chaos, immersed in the solitude of nature. As a result, when planning a vacation, I’m never quite sure whether I want to “get away from it all” or experience the novelty and adventure of another urban area. Las Vegas, New York, and Paris are among my favorite places to visit; on the other hand, I also enjoy a meditative silent retreat, a long weekend in the desert, or a lazy trip through the countryside of Provence. Although I haven’t been there in far too many years, one of my favorite places to go for peace and quiet is Saturna Island.

Just Across the Strait

Perhaps I should begin with a quick geography lesson. British Columbia is Canada’s westernmost province. Its largest city, Vancouver (where I lived for three years), is on the Pacific coast, just a few hours’ drive north of Seattle. Not far off the coast—about an hour and a half by ferry—is Vancouver Island, an immense piece of land with an area about the size of Vermont and New Hampshire combined. On Vancouver Island you’ll find Victoria, the capital city of British Columbia, and about three-quarters of a million people. The stretch of ocean between the mainland and Vancouver Island is known as the Georgia Strait, and scattered along the 300-mile (483km) length of the strait are hundreds of smaller islands, only a handful of which are inhabited. The Gulf Islands, as they are called, have all the natural beauty typical of the Pacific Northwest, and a much more relaxed pace of life than the big cities.

Saturna is the easternmost Gulf Island, just beyond U.S. waters (and the San Juan Islands that lie there). Although it’s one of the larger islands at 12 square miles (31sq km), it’s the least populated, with roughly 350 year-round residents. It can be reached only by float plane, private boat, or ferry, and as there are no direct ferry routes from the mainland, most visitors must travel by way of Vancouver Island or one of the other Gulf Islands. By the time you get there, you already have a sense of its remoteness. And as soon as you begin to look around, you realize you’re in a wonderfully different place.

Guidebooks sometimes describe Saturna in terms of what it doesn’t have. There’s no town—just a few scattered businesses. There’s no laundromat, bookstore, movie theater, or pharmacy. There’s just one gas pump and one ATM, both of which were added since the last time I visited. What Saturna does have, in great abundance, is character. In this tiny rural outpost of civilization you can find not only peace and quiet, but an amazing concentration of interesting things and people.

I distinctly remember the exact moment I got hooked on Saturna. On our first visit there in the late 1990s, Saturna was our last stop on a tour of the Gulf Islands. We had reservations at the Breezy Bay Bed & Breakfast, a place that, from its website, looked quaint and inviting. When we arrived, our host, Renie Muir, showed us to our room in the 1890s farmhouse. As we walked up the stairs, we first entered a library. I just gasped—this was the room of my dreams. Dark wood, the smell of old books, and comfy chairs all around. For me, that’s heaven. I knew I had come to the right place, and as I was to discover, that room was in a way a microcosm of the entire island: a place of contemplation, interesting ideas, and a simpler, more meaningful way of life.

Outside our window was a farm—with an orchard, sheep, chickens, and a llama or two. One path led down to a small beach; another led up to the top of a hill with a beautiful panoramic view. We spent many hours relaxing, exploring, reading, and talking. The things we experienced—whether the sight of an old red tractor rusting along the side of a trail or a conversation with our host or another guest—were endlessly fascinating. You may be thinking, “That’s nice, but I can relax or talk anywhere. What’s really so special about Saturna?” The best way I can think of to put it is, of all the places I’ve visited, Saturna has consistently had the highest concentration of memorable moments. Something about the place, the environment, and the people who are drawn to the island, makes it a fertile breeding ground for interesting things.

For being such a small place, Saturna has plenty to see. A few minutes away from Breezy Bay by car is Winter Cove Marine Park, with scenic hiking trails and a picturesque view of small boats anchored offshore. One of the trails leads to a narrow, rocky channel between Saturna and nearby Samuel Island. When the tide changes, water begins rushing through the channel dramatically. Watching water levels equalize may sound as exciting as watching paint dry, but I find the sight absolutely riveting.

Drive to the other end of the island, and there’s an old (but still functioning) lighthouse. Trails lead through a meadow past a deserted caretaker’s residence and utility building, their state of gentle decay lending a sense of history and melancholy to the area. Along the rocky shore just below, tide pools have an abundance of small creatures, starfish are plentiful, and seals can often be seen fishing nearby. (Whale watching is also a popular pastime on Saturna.)

In the center of the island is Mt. Warburton Pike. At 1,630 feet (497m), the summit is the highest point in the Gulf Islands, providing a breathtaking view (along with a handy location for TV antennas). Saturna also has a large vineyard, although apparently it fell on hard times a few years back, and now has a new owner who’s trying to rehabilitate it. A tiny cemetery serves as the final resting place of some of the island’s earliest residents. There are also two general stores (one with a small cafe), a pub, a church or two, an upscale restaurant and lodge, and a surprising number of bed-and-breakfasts. Young children attend the island’s elementary school; after that, school requires a trip to a neighboring island by water taxi, the local equivalent of a school bus. Services for residents aren’t elaborate, but all the basics are available—and the community helps take care of each other.

Saturna’s biggest claim to fame is its annual Canada Day Lamb Barbecue. Each July 1, Saturna’s population swells to over 1,000 as people flock to the island for what is essentially a community fair. I had heard a lot about this event, so Morgen and I went one year. When we showed up at Winter Cove Park, Morgen seemed to recognize the woman who sold us our tickets. As we walked away she whispered to me that it was Pat Carney, one of Canada’s first female senators and a Saturna native. We listened to live music, shopped for crafts, sampled the local wine. Then we headed over to a tent to play some games. After winning at bingo I decided to move over to the blackjack table. I was doing well there too, and I was up a few dollars when the dealer had to leave. Morgen asked if I had any idea who had been dealing the cards; I didn’t. She said she was pretty sure it was Ferron, a well-known folk singer who was also from Saturna. Sure enough, moments later the erstwhile dealer got up on stage and started singing. These little “brushes with greatness” are just another ordinary part of the Saturna experience. Everyone knows everyone else, and at least for an outsider like me, there was little perceptible class distinction. Everyone is equally important, equally interesting.

And that is one of the things I find so appealing about Saturna. As you walk around, people look you in the eye, smile, and say hello—a ritual I rarely experience in the city. Conversations happen easily, and you simply don’t encounter anyone without a story. Saturna’s residents are an eclectic mix of merchants and farmers, technologists and artists, spiritual seekers and environmentalists—along with, of course, a wide variety of wildlife. Even if life is not exactly idyllic, residents and visitors of Saturna Island are people who choose to be there, who trade a certain amount of convenience for the rich experience of a simple lifestyle.

Note: This is an updated version of an article that originally appeared on Interesting Thing of the Day on April 18, 2003, and again in a slightly revised form on July 1, 2004.