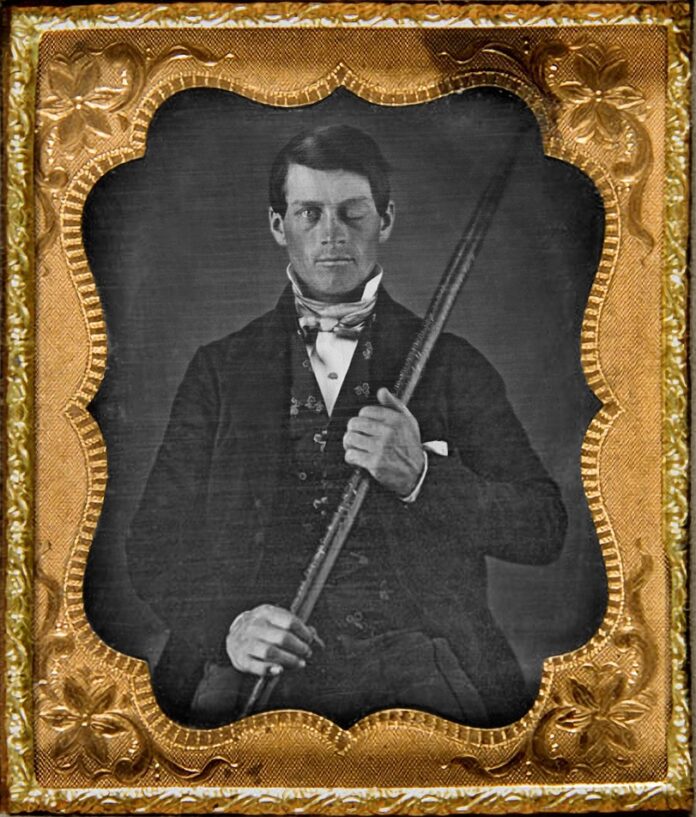 Image credit: Originally from the collection of Jack and Beverly Wilgus, and now in the Warren Anatomical Museum, Harvard Medical School. [Attribution, GFDL or CC BY-SA 3.0], from Wikimedia Commons

In September, 1848, the Rutland & Burlington Railroad was expanding its line across Vermont. In order to keep the tracks as straight as possible, construction workers first had to remove a great deal of stone. The foreman of one group of men undertaking this difficult task was Phineas P. Gage. Twenty-five-year-old Gage was intelligent, kind, and well-liked. He was also quite athletic and agile, and impressed his employers as being exceptionally efficient at his work.

Gage was an expert at removing rock using explosives. The procedure was to drill into the rock, fill the hole halfway with explosive powder, insert a fuse, and then cover the powder with sand. The layer of sand was necessary to direct the force of the blast into the rock, rather than out the top of the hole, and the sand had to be packed down by pounding it with a specially designed iron tamping rod. Gage had a custom-made rod that weighed 13 pounds (5.9kg) and measured 3 1/2 feet (1.1m) long, with a diameter of 1 1/4 inches (3.2cm) at the bottom, tapering to a dull point at the top.

Sticks and Stones May Break My Bones

At 4:30 p.m. on September 13, Gage was preparing a charge, and apparently failed to notice that it had not yet been cushioned with sand before he began tamping it. When the iron rod scraped against the rock, it created a spark that ignited the powder. The resulting explosion propelled the rod out of the hole, through Gage’s left cheek, and out the top of his skull. The rod landed nearly 100 feet (25m) away.

Remarkably, despite the two new and rather large holes in his head and the significant bleeding that resulted, Gage did not even lose consciousness. He remained upright and lucid as his coworkers loaded him onto an ox cart and took him to the nearby town of Cavendish. A half hour later he was sitting on the hotel porch, chatting with the owner while waiting for the arrival of Dr. John Harlow, the local physician. Dr. Harlow treated Gage’s injury as best he could, piecing the remaining portions of the skull back together and cleaning and dressing the wounds. Over the coming weeks Gage developed a series of infections but fought them successfully under Harlow’s care. Other than the loss of sight in his left eye, Gage was declared to have made a full recovery in just a couple of months.

Suddenly, I’m Not Half the Man I Used to Be

An experience like this is bound to make anyone a bit grumpy, but even as he healed physically, Gage underwent a profound change in personality. Although he never lost his language ability, memories, or motor skills, his temperament was completely different. He became profane, impatient, rude, obstinate, and unable to carry out any of the endless plans he made. His friends said that “Gage was no longer Gage”; it was as though all of his ethical filters had been turned off. Because he was such unpleasant company, he had difficulty keeping jobs, and at one point put himself on display at Barnum’s Museum in New York City. Several years later, having made his way to California after an extended stay in Chile, Gage began having epileptic seizures. These continued for several months until he suffered a series of major convulsions that led to his death on May 21, 1860—nearly twelve years after his accident.

Gage was buried without an autopsy, but seven years later his body was exhumed. The skull (along with the tamping iron, which had been buried with him) were sent to Dr. Harlow, who examined them and then donated them to the Warren Medical Museum of the Harvard Medical School. Later they were transferred to Harvard’s Countway Library of Medicine.

I first heard the story of Phineas Gage in a graduate course in cognitive science; anyone who studies the brain is bound to run across the story in textbook after textbook. Although no one can say with complete certainty exactly what parts of Gage’s brain were damaged, it seems the injury amounted to a very crude frontal lobotomy. This case became famous as the first hard evidence that aspects of one’s personality (and, by implication, behavior) were localized in portions of the frontal lobe.

Neurologist Antonio Damasio has spent years studying brain injuries similar to Gage’s. His research has led him to believe that emotion figures crucially into rational thought and decision-making. If the portion of the brain that processes emotion is damaged, it becomes difficult or impossible to make good decisions. The sad tale of Phineas Gage has produced valuable insights for the field of neuroscience, not to mention a lesson we can all heed: stay far away from explosives!

Note: This is an updated version of an article that originally appeared on Interesting Thing of the Day on August 5, 2004.