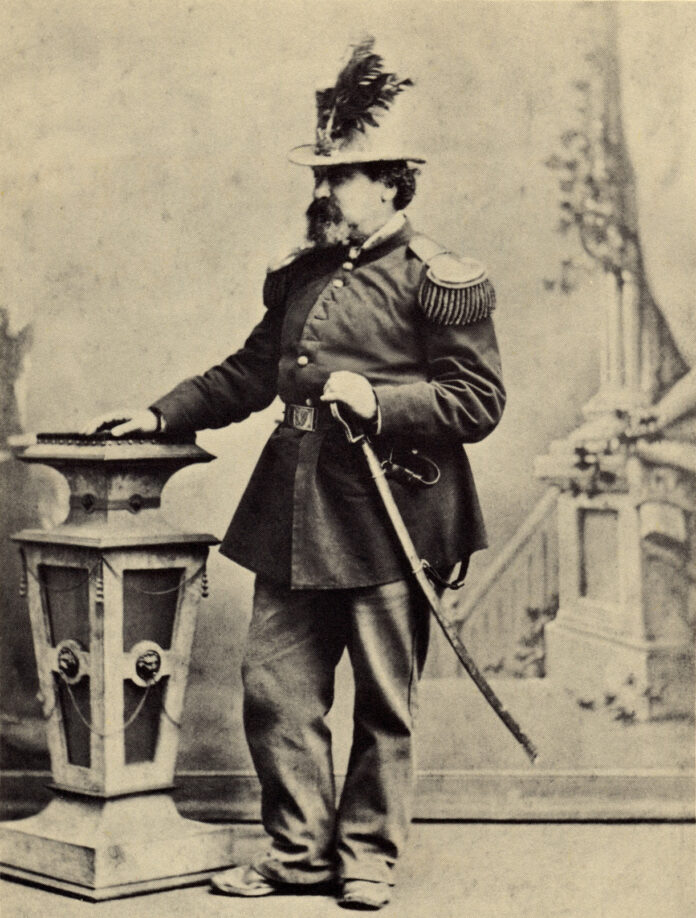 Today’s interesting “thing” is ostensibly a person, though in fact it’s more of a concept: the notion that someone could declare himself to be an emperor, and—without any force or intimidation—actually get an entire city to go along with the fantasy, at least superficially, for more than 20 years. I am speaking of one of San Francisco’s most colorful historical figures: Joshua A. Norton, a.k.a. His Imperial Majesty Norton I, Emperor of the United States and Protector of Mexico.

Joshua Norton was born in England in the early 1800s—sources vary as to the exact year of his birth, but it was somewhere between 1811 and 1819. From 1820 to 1849, he lived with his parents in South Africa. He then moved to the United States, taking up residence in San Francisco. Norton had come to the United States with a small fortune, and for several years, he was a successful businessman. Then a major investment turned out poorly, and Norton went bankrupt in 1858. He left the city, but returned the following year—wearing an army uniform with gold-plated epaulets and a funny hat. He presented a piece of paper to the editor of a local newspaper declaring himself to be “Norton I, Emperor of the United States.” The editor found Norton’s claim to be so amusing and bold that he printed the declaration on the front page of the paper as though it were genuine. And, surprisingly enough, the general public’s reaction was apparently “Cool. We have our own emperor.” Norton began striding regally around San Francisco in his uniform as if he really were the nation’s supreme ruler, and the city’s residents indulged him.

By all accounts, Norton, whatever his eccentricities or mental deficiencies, was a kind, affable, and benevolent man who was much loved by almost everyone he encountered. Whether or not he truly believed he had any power or right to rule, the people of San Francisco treated him with great deference and respect. He spent his days patrolling the streets, inspecting sidewalks and cable cars, supervising street repairs, and praising citizens for any good deed he observed. He especially liked to monitor “his” police force to make sure they were serving the city’s needs properly.

Norton was given free meals at restaurants, and in fact, restaurants that served him liked to put up brass plaques bragging that they were an official supplier of the emperor—it was good for business. Theaters reserved prime seats for Norton and his two dogs at every opening, and he was invited to lead parades and participate in various civil ceremonies. A local printer even provided Norton with his very own imperial currency, which merchants accepted as cash. (These notes are worth thousands today at auction.)

On one occasion, a police officer who didn’t appreciate Norton’s status arrested him and attempted to send him to a mental institution. The public outcry was immense. The police chief released Norton with a formal apology, and thereafter, all police officers saluted the emperor when they passed him on the street.

Laying Down the Law

Emperor Norton is perhaps best known for his frequent and audacious decrees, which the local newspapers always printed with great relish. (And when there wasn’t an actual decree, sometimes the newspapers made them up.) An 1860 decree dissolved the United States of America; a few months later, another decree prohibited Congress from meeting in Washington, D.C. In 1869, Norton issued a decree abolishing both the Democratic and Republican parties. Of course, no one ever took these decrees seriously, but this apparently didn’t diminish Norton’s enthusiasm for his vocation.

Some of the decrees, though, were strictly local—and showed an uncanny degree of foresight. In 1872, Norton decreed that a suspension bridge should be built between Oakland and San Francisco by way of Goat Island (now called Yerba Buena Island). Later that year, another decree demanded that a survey be undertaken to determine whether a bridge or tunnel was the best way to connect San Francisco and Oakland—and the members of the city’s Board of Supervisors were to be arrested for having ignored his earlier decrees. (They weren’t.) But a bridge very much like the one Norton had described was built eventually; the San Francisco–Oakland Bay Bridge opened in 1936. And in 1972, almost exactly 100 years after Norton’s decree, so did a tunnel—it’s used by BART, the Bay Area Rapid Transit system.

One proclamation frequently attributed to Emperor Norton is that referring to the city of San Francisco as “Frisco” was a high misdemeanor punishable by a $25 fine. In earlier versions of this article, I repeated the claim, which I’ve seen in countless places. But that appears to be wrong. Evidence strongly suggests that this story was made up by one of Norton’s biographers—no record has been found that those words ever escaped Norton’s lips. But let’s be clear: proclamation or not, fine or not, no one should ever call San Francisco “Frisco.” (Calling it “San Fran” is an only slightly less egregious offense—let’s call it $20.)

Norton’s reign as emperor lasted for 21 years. He died in 1880 of an apparent stroke while walking down the street. Although Norton died penniless, the city gave him a regal burial, and about 30,000 people turned out to watch his funeral procession.

In the years since, some people have argued that Norton really was the emperor, inasmuch as the public (at least in San Francisco) acknowledged that title. And there’s something to be said for that line of thought; after all, the only reason any government is legal or valid is ultimately the general assent of those governed. The United States of America, after all, declared itself into existence once; why shouldn’t an individual do the same?

Norton did not have a successor, but there’s no reason someone else couldn’t step into the role, even now. Knowing what I do about the follies and failings of the nation’s current government, it seems clear to me that we should once again bring in an emperor to enforce order, fairness, decorum, and maybe a bit of whimsy. Clearly this individual must be someone with intelligence, charm, good humor, and poor fashion sense. As the logical choice, I’d be honored to serve.

And so, citizens of the United States and/or Mexico, should you choose to accept me as your new emperor by public acclaim, I will humbly and faithfully discharge the duties of the office. I promise to come up with great ideas that can’t possibly be implemented for a century; to issue impressive-sounding, unreasonable, and unenforceable decrees on a regular basis; to dress in a goofy uniform; and to behave in a generally benevolent and weird manner. In other words…pretty much life as usual. I’ll be expecting to receive your tax payments shortly. I definitely prohibit using the name “Frisco.” Oh, and Congress: you’re fired.

Note: This is an updated version of an article that originally appeared on Interesting Thing of the Day on May 26, 2005.