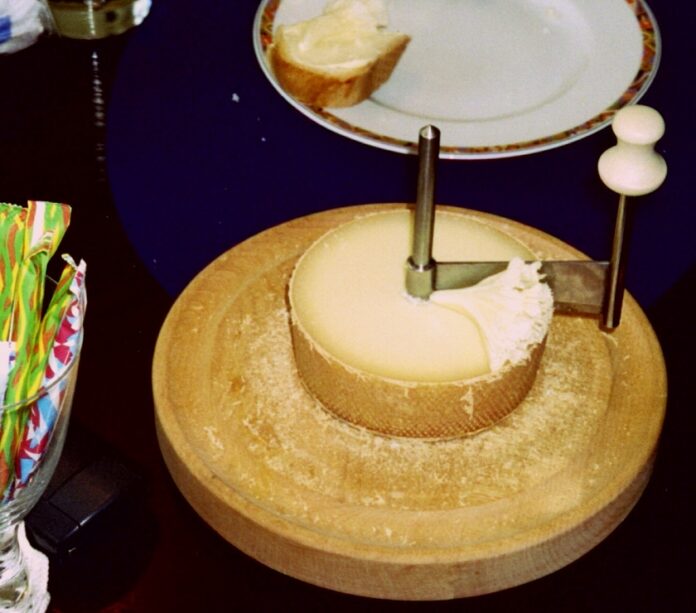 Switzerland is a country known for, among other things, cheese and engineering. These are two concepts that, while important individually, generally do not go together. (In fact, I have been wary of cheese engineering ever since I read The Absurdly Silly Encyclopedia and Fly Swatter by Jovial Bob Stine in 1978. It cautioned the young reader not to build a raft out of cheese, because cheese does not float.) Nevertheless, the great minds of Switzerland have produced a fascinating, interdependent pairing of cheese and machine, neither of which is complete without the other. As both a cheese lover and a gadget lover, I was delighted to discover a unique device called a Girolle. It’s the world’s most clever cheese slicer, and it’s designed to work with just one very special kind of cheese.

Not Your Father’s Cheese

Growing up in the United States, I was conditioned to think of cheese as an ingredient or a topping, not as an independent food. Macaroni and cheese, cheeseburgers, cheese pizza, cheese puffs, and Parmesan sprinkled on spaghetti—these were cheese to me. I turned up my nose at sliced cheese served on a cracker, which seemed unnatural. Everyone knew that the cheese on your cracker was supposed to have been squirted out of a can.

Europeans, however, take cheese much more seriously. A proper French meal, for example, always includes a cheese course, and in many parts of the continent it is customary to have several cheeses at breakfast. Now that my culinary sensibilities have evolved considerably, I have developed quite a fondness for cheese, and my refrigerator usually has quite a few choices, ranging from soft to hard, mild to smelly.

On my first visit to Switzerland’s capital city of Bern in 2001, some friends introduced me to a type of Swiss cheese I had never encountered before. It’s called Tête de Moine, or Monk’s Head cheese. Superficially, it’s a firm, whitish cheese with a brown rind. It would be easy to overlook if you found it in a store. What makes this cheese special is the way it is served. According to tradition, this cheese must never be cut. Instead, you must first slice off the top rind of a whole cheese, then for each serving, scrape a thin layer from the top of the round, working at an angle so as to make the edges crinkle. This forms the cheese shaving into a small flower shape called a rosette. Besides giving your cheese an ornamental appearance, this technique is said to bring out the flavor and aroma in a way that ordinary slicing would not. Although labor-intensive, this method of serving Tête de Moine goes back centuries.

They Call It “Head” Cheese

Near the town of Bellelay in the lush mountains of Switzerland’s Jura region, Tête de Moine cheese was invented over 800 years ago by the monks of the Bellelay Abbey. Eventually, the monks began to teach the local farmers how to make the cheese, which was at first simply known as Bellelay. After the French Revolution, the name of the cheese was changed to Tête de Moine. There are two competing theories as to the origin of this name. According to one story, the monks charged the farmers what we would today call a license fee: in return for permission to make the monks’ special cheese, the farmers had to give the abbey one cheese each year per monk; hence, “Monk’s Head.”

A more colorful theory—and what I had always assumed to be the case—was that the cheese was called “Monk’s Head” because that’s what it looks like. The traditional monastic haircut, called a tonsure, is a shaved crown (leaving a ring of hair around the outside). Because Tête de Moine cheese always has a round white top surrounded by a ring of brown, the association is easy to see.

Although Tête de Moine and its preferred serving method have been around for a long time, it was not until 1982 that cheese shaving met modern engineering and Bellelay’s cheese industry really took off. Nicolas Croiviser, a craftsman from the nearby town of Lajoux, had a large family of cheese lovers, and wanted to find a more efficient way of shaving large quantities of Tête de Moine. His first idea was to mount a blade on a rotating handle suspended above the round of cheese. This worked, but still somewhat awkwardly.

Then Croiviser had the insight to flip the axis upside down, turning it into a spindle. Pop the cheese right onto the spindle, slide on the handle, and you can crank out cheese flowers to your heart’s content. Thus the Girolle was born. Ever since, the patented Girolle has been distributed by a local mechanical products manufacturer called Métafil-laGirolle. At first, the company thought they may sell a few thousand; according to their website, more than three million have been sold to date.

This is all the more remarkable when you consider that a Girolle, consisting of just a few simple pieces of wood and metal, typically sells for upwards of US$35 (and sometimes a great deal more). Given the modest cost of goods, this simple device has made its inventor an enormous amount of money, not to mention boosting the popularity of Tête de Moine cheese.

You Can Even Eat It

With all the fuss over the appearance and preparation of Tête de Moine, you may wonder if it actually tastes any good. It does indeed. It has quite a strong, sharp flavor and aroma that has been described variously as “spicy,” “nutty” (or “almond-like”), “fruity,” and even “beefy.” (It seems somehow incestuous to refer to a milk product as “beefy,” but maybe that’s just me.) In any case, it is generally regarded as the strongest Swiss cheese, and it contrasts nicely with milder varieties like Emmental and Gruyère. Tête de Moine is often served with fruit or fresh French bread, or simply as a decorative yet edible garnish for a cheese platter.

Today, Tête de Moine cheese is still produced by small local dairies near Bellelay. (The Bellelay Show Dairy even has a Tête de Moine museum, with cheese-making demonstrations on Wednesdays in the summer.) The cheese is made as it has been for centuries from raw, unpasteurized cow’s milk curded by the addition of natural rennet. It is then formed into a roughly one-kilogram cylinder and aged for three to six months, with periodic brine rinses to enhance the curing process.

If you don’t happen to live in Switzerland, never fear: Tête de Moine cheese is exported all over the world. Any good local cheese shop should have it, or at least know where to get it. Failing that, many online retailers sell both the cheese and the Girolle (sometimes even as a set). One suggestion, however: if possible, smell before you buy. I have occasionally purchased Tête de Moine cheese and found it to have an overpowering odor of ammonia. This is a bad sign; it most likely means the cheese was stored improperly. Just as important, if you plan to serve your cheese using a Girolle (as you should), be sure to get either a full cheese or a round sliced latitudinally. A wedge—excuse me—just won’t cut it.

Tête de Moine cheese needs a Girolle, and a Girolle needs Tête de Moine—no other cheese has just the right characteristics to make this sort of cheese flower. This perfect combination of food and machine truly warms my heart. The science of cheese engineering is clearly off to a good start.

Note: This is an updated version of an article that originally appeared on Interesting Thing of the Day on April 2, 2003, and again in a slightly revised form on June 16, 2004.