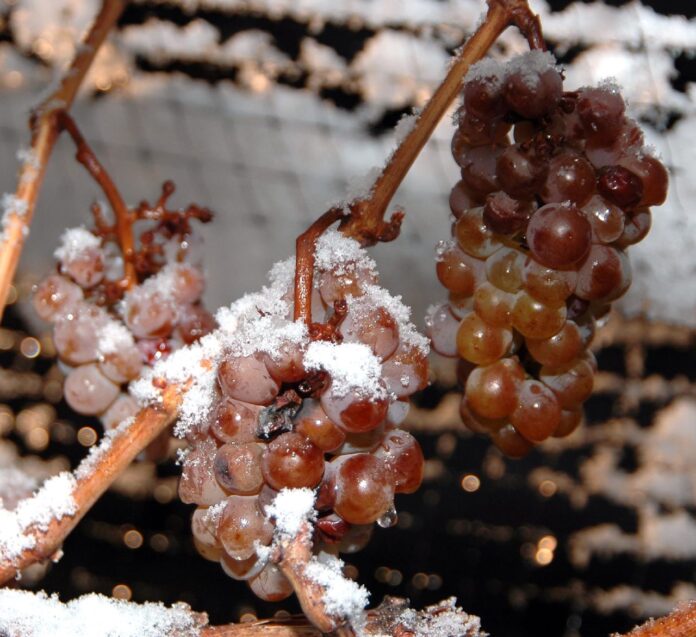 I may not be the most agriculturally sophisticated person in the world, but I always felt pretty confident in my basic belief that frost was a Bad Thing when it came to growing produce. If whatever crop you’re growing hasn’t been harvested by the time temperatures dip below freezing, serious damage can be done, right? Common sense, however, frequently turns out to be wrong. At least for grapes, freezing is eagerly anticipated by vintners in certain parts of the world. It’s a key factor in the production of an expensive variety of dessert wine known as icewine.

Grapes are most comfortably grown in a Mediterranean climate—areas with hot, dry summers and mild, wet winters, such as France, Italy, Spain, Australia, and parts of California. But plenty of excellent wines also come from Germany, Austria, and the southeastern and southwestern corners of Canada, all places where freezing temperatures in winter are quite normal. And these are exactly the regions where icewine is produced.

To make icewine, you must wait until the grapes have frozen naturally on the vines—typically, you look for two solid days of temperatures in the range of 9°F (–13°C) to 14°F (–10°C). This implies a late harvest, of course, which in turn means that the grapes will have a high sugar content. Grapes are picked by hand (sometimes in the middle of the night to ensure that the temperature does not rise above freezing) and pressed while still frozen. This is the crucial step, because when frozen grapes are pressed, most of the water remains behind as ice crystals, and the juice obtained—just a drop or two per grape—is highly concentrated. (In fact, the colder the grapes, the higher the percentage of sugar in the juice, and this is exactly what you want for icewine—a minimum of 35% sugar.) This juice is then fermented naturally over a period of weeks or months and bottled more or less like regular wine. But because production is so labor-intensive, with yields around 10% of a regular harvest, icewine is sold in half bottles (375ml) at prices averaging about US$45 per bottle.

The smaller bottles are a good idea for another reason, too: icewine is quite sweet (and usually high in alcohol, too), so it’s consumed only in small quantities. What does it taste like? Imagine a sweet white wine, then imagine letting half the moisture evaporate away so that you have something not only sweeter but twice as viscous. That’s roughly the idea of icewine: it’s like a highly concentrated white wine. It’s always served chilled, usually with (or following) dessert.

Icewine was discovered by accident in 1794 in Franconia (which is now part of Germany). After an early freeze, vintners decided to press the grapes anyway to see what could be salvaged. The unexpected result was an exceptionally sweet wine, dubbed Eiswein. It was several decades before icewine was produced intentionally in Germany, and production in North America didn’t begin until the late 1970s. Production is always a bit risky since the vineyard is at the mercy of the weather; yields, quality, and price vary significantly from region to region and from year to year. Icewine has now become a bit of a fad and a status symbol—it’s what fashion-conscious wine snobs finish expensive meals with.

On the other hand, wine snobs who have not already been sold on how hip icewine is supposed to be often don’t like it. A comment I’ve heard from more than a couple of people is, “Ewww. This isn’t good wine; it’s way too sweet.” But there are also people who believe a martini with more than a misting of vermouth is too sweet, or even that the quality of any alcoholic beverage is determined by its position on the dry-sweet continuum, with sweeter meaning less desirable. I have no such prejudice myself. Besides, icewine is in the same league as port, sherry, and perhaps even mead—it’s not something you would generally drink in large quantities along with a meal, but a small glass as a sweet digestif can be quite nice.

Icewine is not that much different from any other late-harvest dessert wine, except in cost. But that’s not to say it isn’t worth a little extra, if only to compensate the grape pickers for freezing their buns off in the middle of the night for your drinking pleasure.

Note: This is an updated version of an article that originally appeared on Interesting Thing of the Day on July 19, 2003, and again in a slightly revised form on July 13, 2004.