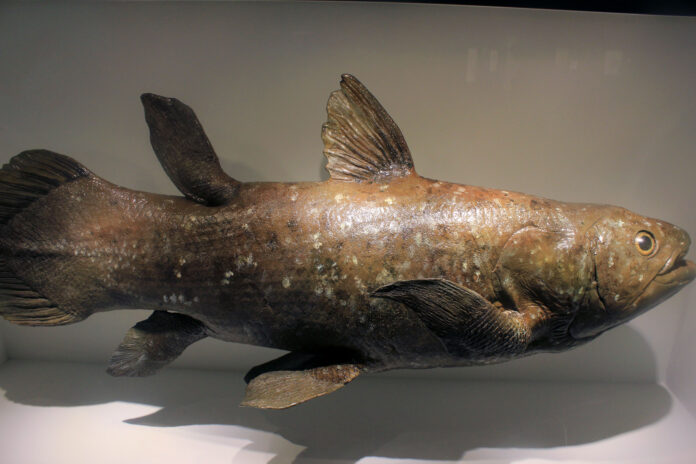 Thank God—or, at least, the Great Prophet Zarquon—for Douglas Adams. Although he wrote primarily to entertain, he was surely one of the Smartest People of All Time, and I can’t even begin to imagine how many fascinating topics I never would have known anything about had Adams not mentioned them in his books in his offhandedly humorous way. Endangered species were one of Adams’s biggest causes, and in addition to co-writing the nonfictional Last Chance to See, he dropped comments about numerous animals in his novels. In fact, it was in Dirk Gently’s Holistic Detective Agency that I first encountered the term coelacanth; a time-traveling character was lamenting the fact that his attempt to rescue this prehistoric fish had inadvertently (and indirectly) led to the extinction of the dodo.

A coelacanth is any of the roughly 90 species in the order Coelacanthiformes. It’s best known for its astonishing “undeadness”; the world’s scientists believed that all coelacanths had been extinct for about 65 million years until a live specimen (Latimeria chalumnae, to be exact) turned up in 1938 off the coast of South Africa. Prior to that time, the coelacanth was known only from fossils. Coelacanth fossils have been found that are some 400 million years old, which is considerably older than the dinosaurs; that the coelacanth should survive that long at all is quite surprising. The usual story is that around 65 million years ago, coelacanths disappeared from the fossil record for the simple reason that they stopped inhabiting areas where fossils were likely to form. That’s a rather unsatisfying answer, if you ask me, because it doesn’t explain how these large fish—some weighing as much as 95kg (over 200 lb.) and measuring nearly 2m (over 6 feet) long—should have gone entirely unnoticed by science for more than a century after coelacanth fossils were first identified. In any case, once scientists realized there were some still living, a search began for more. Another group of coelacanths was found off the islands of the Comoros (between Africa and Madagascar) in the early 1950s, and in 1997, a second coelacanth species (Latimeria menadoensis) was discovered near the Indonesian island of Sulawesi.

The coelacanth has an unusual body structure, with an extra fin at the tail and long, bony, leg-like pectoral and pelvic fins. It was once thought to be a “missing link” between fish and mammals. It is the only living animal with a working intracranial joint, which enables the fish to open its mouth extremely wide so that it can swallow its prey whole. It’s also the only species with a rostral organ, which is sort of like a “nose” that detects the electrical impulses produced by some fish it feeds on. And although, like all fish, its offspring develop in eggs, the coelacanth is ovoviviparous, meaning its eggs are fertilized and carried inside the mother until they hatch, so the young are born alive.

As amazing as it is that the coelacanth has managed to survive for hundreds of millions of years, it could very well reach a rather inglorious end. There appear to be fewer than 500 remaining individuals of Latimeria chalumnae, but they’re critically endangered—fisherman frequently catch them by mistake, and they often don’t survive even if they’re thrown back in. (The more recently discovered species, Latimeria menadoensis, is a bit more robust—but still threatened, with fewer than 10,000 individuals.) Although some efforts are underway to protect their territory, it’s unclear how to keep them safe without endangering the fishermen’s livelihood.

But the biggest unanswered question about the coelacanth is why its name isn’t pronounced the way it’s spelled (or vice-versa). I spent years assuming it was either “COAL-a-santh” or “co-EL-a-santh,” but in fact the two c sounds are reversed from what I’d thought and the oe inexplicably makes the “ee” sound: “SEE-la-kanth.” This in spite of the fact that the the name comes from the Greek words koilos (“hollow”) and akantha (“spine”), both of which are unambiguously pronounced with hard k sounds. If the world’s conservationists really want to get people talking about this fish, some simple phonetic or orthographic adjustments would help tremendously. Or better yet: an entirely new name, such as Douglas.

Note: This is an updated version of an article that originally appeared on Interesting Thing of the Day on May 28, 2005.