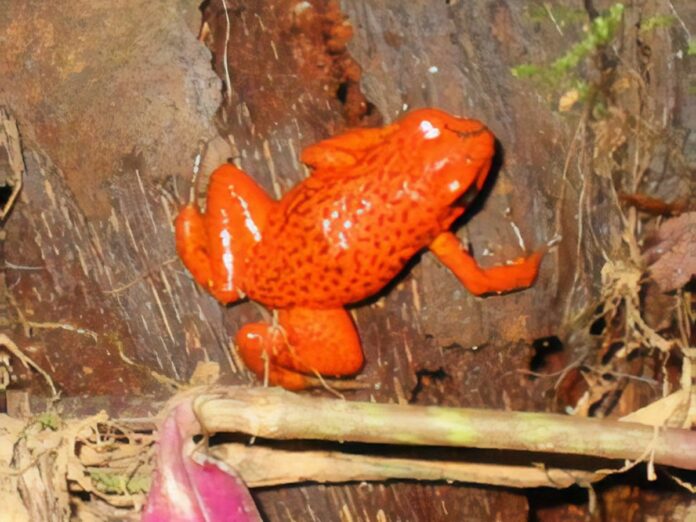 Where I come from, frogs were always considered harmless, even comical, creatures. Not that you’d want to have one in your bathtub with you, but you imagined them leading a leisurely amphibian life, hopping from one lily pad to the next, keeping the pond free of insects, and croaking happily away. Kermit, of course, epitomized the friendliness and goofiness of frogs. He sang, “It’s not easy being green,” but his biggest problem seemed to be that his girlfriend was a pig.

In countless high school biology classes, students have had to set aside their anthropomorphic image of frogs to dissect them and study their anatomy. Although the students sometimes consider this quite unpleasant, you could hardly imagine a less scary specimen. And of course there’s fried frogs’ legs, a fairly bland but unobjectionable dish I’ve enjoyed in New Orleans.

A Touch of Color

In the tropical rain forests of Central and South America, however, frogs conjure up a rather different image. If you look on the ground—under broad leaves, near puddles, or in other cool, moist places—you’re likely to see a tiny splash of color. Only about one inch (2.5cm) long, poison dart frogs contrast vividly with the dull greens and browns of their habitat. But poison dart frogs differ from their larger, greener cousins in a more important way. Their name comes from the fact that glands on their backs secrete a poison that is sometimes rubbed on the tips of darts or arrows for hunting. They are, in a passive way, quite dangerous, and about as far from Kermit as you can get.

There are about 170 different species of poison dart frog. Their appearance varies greatly from one species to the next, but the colors are always bright. Every neon shade of red, orange, yellow, green, and blue is represented. One species, the Strawberry Poison Dart Frog (Dendrobates pumilio), is sometimes called the “blue jean frog” because it has a bright red or orange body with blue legs. Another, the Harlequin (Dendrobates histrionicus), has spots that contrast sharply with its base skin color, though the pair of colors varies from one group of frogs to the next.

Of Mice and Men

Just how poisonous are poison dart frogs? Well, that depends. Generally speaking, the secretions from a poison dart frog’s back cannot permeate unbroken human skin, so they can be handled safely as long as you don’t have any open cuts and are careful to wash your hands afterward. The poison causes problems only if it gets into your bloodstream (either directly or through ingestion). Even then, it probably won’t kill you, though some species are much more toxic than others. The statistic usually quoted about the Golden Poison Dart Frog (Phylobates terriblis), for example, is that its skin contains enough of the alkaloid chemical Batrachotoxin to kill 20,000 mice. Some websites claim this equates to eight adult humans, though actually the number is closer to 100. But the frogs don’t bite, so you’ll only get into trouble if you try snacking on one.

Poison dart frogs reportedly become less poisonous over time when in captivity, apparently due to a change in diet. The toxin is created from chemicals found in insects the frogs eat in the wild; without access to exactly the right kinds of food, the toxicity rapidly fades. Of course, poison dart frogs in captivity also have less need of this natural defense mechanism, which reduces their appeal to natural predators from spiders to birds.

Take Two Frogs and Call Me in the Morning

For a number of years researchers have been investigating medical applications for frog toxins. The secretion from the Ecuadorian species Epipedrobates tricolor has been adapted to create a pain killer called ABT-594 (nicknamed “epibatidine” in honor of the frog). Epibatadine has been described as being 200 times more potent than morphine, with fewer side effects. Poison dart frog secretions also show promise for the development of muscle relaxants and heart stimulants.

You may have heard of people getting high from licking toads that secrete a hallucinogenic chemical. That is an entirely different (and arguably more benign) substance from that found on poison dart frogs. Kissing a frog is unlikely to turn it into a handsome prince, though if you kiss the wrong kind of frog there’s no telling what you may experience. Personally, I have a general policy of avoiding lip contact with any wildlife and I think I’ll stick to it.

Note: This is an updated version of an article that originally appeared on Interesting Thing of the Day on May 4, 2003, and again in a slightly revised form on January 30, 2005.