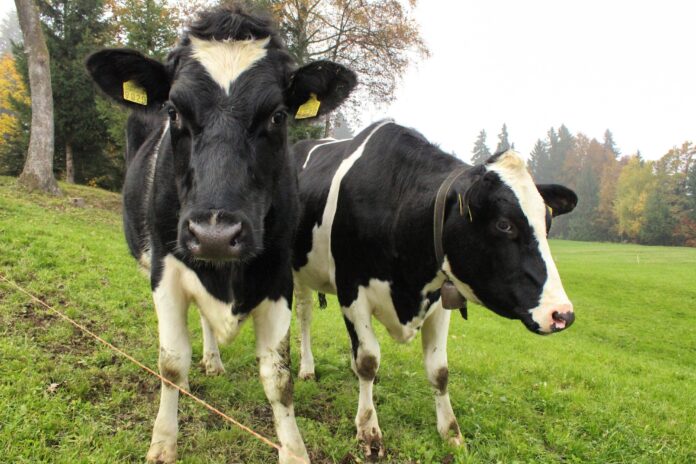 Since the beginning of Interesting Thing of the Day, people have regularly sent me suggestions of new topics to cover. Owing to the site’s extended hiatus, I still have nearly 100 items on that list that have not yet turned into articles. I was browsing that list today, and when I came upon the entry “cows with friends,” I was tempted, for a moment, to delete it as just plain silly. I’m glad I didn’t!

This suggestion appeared on my list way back in 2012, when a farmer named Colin in Alberta, Canada sent me this nugget by email:

The other day I came across an article about cattle herds that intrigued me. As I am a farmer I spend most of the winter observing bovines and had not noticed this apparent fact. Apparently each animal in the herd has a best friend. It seemed a little odd when I read about this, but over the past few weeks I have begun watching my herd, while feeding, and have noticed that whenever there is an “argument” it is always two against one. It reminds me of being back in elementary school and the ridiculous fights that seem to occur.

I looked up articles on this topic, and it turns out that cows do indeed have best friends—there has been serious scientific research to back up this claim!

In one test, cows were put in a pen, where their heart rate and cortisol levels were monitored. Some of the cows were alone, some were with another randomly chosen cow, and some were with the cow that appeared to be its “best friend.” The cows paired with their friends showed consistently lower stress than the others. So it wasn’t merely the fact that cows like company (which they clearly do) but the fact that they prefer particular company—just like humans.

In another, more recent experiment, calves raised in pairs exhibited better cognitive development and behavior regulation than calves that had been kept separated from others during the first couple of months of their lives. Although that test didn’t give the calves free choice of their “friends,” it did show how important social bonds are to cows.

Of course, the researchers who study these things aren’t trying to keep cows happy for merely altruistic reasons. A less-stressed cow is both easier to handle and likely to produce more milk, and if farmers can make modest changes to their handling procedures that keep the cows happier, it benefits the farmers too. Now if someone can figure out what cows are arguing about, that’ll be a real breakthrough.