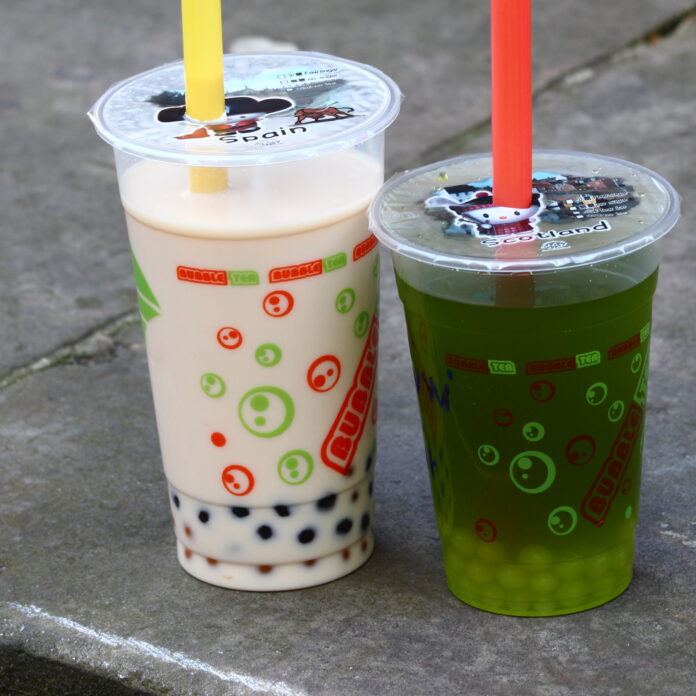 When I first wrote about bubble tea on this site in 2003, it was only just beginning to appear in the United States, though it was much better known in Canada (where I originally encountered it). This odd beverage originated in Taiwan in the late 1980s, and in the last couple of decades, it has spread all over the world, and morphed into numerous forms. Even though bubble tea isn’t as exotic as it once was, it’s still a curious concoction by any standard.

What I’m referring to here as “bubble tea” is known by many names. “Boba,” a term currently in vogue in the United States, approximates the Chinese pronunciation of the key ingredient and also, conveniently, sounds like “bubble.” Other alternative names, such as “pearl tea” or “tapioca drink,” are slightly more descriptive. Basically, bubble tea is a sweetened beverage made with water, natural flavors, (usually) a dairy component, and…large tapioca balls. These boba (“bubbles” or “pearls”) are dark brown, about 7 mm in diameter, slippery on the outside, and quite chewy on the inside. The bubbles by themselves have very little flavor; their main purpose is to provide texture. Because they’re so large, you need a special, oversized straw to drink bubble tea with. Or should I say eat? Consuming bubble tea is a matter of both drinking and chewing, and after finishing a glass you feel quite full. In other words, it’s not so much an accompaniment to a snack as an entire snack and beverage all in one.

Bubble tea comes in many flavors, with some of the more popular being almond, mango, chocolate, and my personal favorite, taro. You can also find red bean, coconut, lavender, and a number of tropical fruit flavors. Nearly every outlet where I’ve seen bubble tea sold also offers it without the pearls—in some cases, you get them only by special request. That may seem to be missing the point, but the “bubble” in bubble tea originally referred to a froth on top of a blended tea beverage, not to the tapioca balls, which were a later addition. In any case, bubble tea is, for many, an acquired taste. Some people just can’t get past the idea of drinking squishy tapioca balls.

Personally, I loved bubble tea the first time I tried it, but opinions vary widely. I surveyed three of my close friends, who by sheer coincidence were all blond Canadian women. After trying bubble tea for the first time, 33% of my sample group said they enjoyed it and would drink it again. The other 67% said it was the most disgusting thing they had ever put in their mouths. Whatever other nuances could be read into that statement, my general impression was that they were not favorably disposed toward bubble tea. (One of these friends later said she had tried it again and thought it wasn’t so bad.) There’s no accounting for taste.

If you want to make your own bubble tea, the most difficult part is locating the ingredients. First and foremost, you’ll need the tapioca pearls. You can sometimes find these in Chinese markets, sold dry in plastic bags rather like pasta. There are also, naturally, a number of online sources. Most pearls are dark brown, though I have seen them in various colors. To prepare them, you boil them in a generous amount of water for about a half hour, then turn off the heat and let them sit for another half hour. Rinse them, and they’re ready to go—or refrigerate them for later.

The tea itself is normally made by mixing a flavored powder with water and adding sweetened condensed milk (or, sometimes, nondairy creamer and a sugar syrup). Add ice and shake, pour the mixture into a glass with a generous portion of tapioca pearls at the bottom, and drink. There are numerous variations on this basic recipe, however. I’ve seen hot bubble tea, fruit juices with pearls, and even frozen bubble smoothies. In fact, just about any sort of beverage you can think of can be made into bubble tea. Strangely enough, at least in North America, actual tea is used only rarely as the base. For that matter, the so-called tapioca pearls are—if you want to be really nitpicky—not actually tapioca. They do have much the same consistency as tapioca, but the starch they’re made from comes from a type of sweet potato.

Bubble tea is not going to replace cola as the standard fast-food drink anytime soon. But every time I turn around I find another local shop that sells it—there are several within walking distance of my house in San Diego. Once you overcome the initial weirdness, it’s quite tasty. If your idea of a strong drink is a single-malt Scotch or a dark lager, try the drink that really has balls: bubble tea.

Note: This is an updated version of an article that originally appeared on Interesting Thing of the Day on April 26, 2003, and again in a slightly revised form on February 27, 2005.