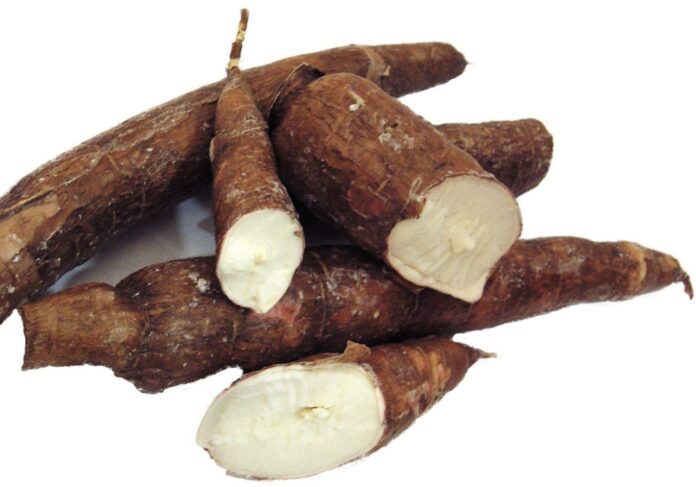 If you’d asked me before my recent visit to San Diego’s Museum of Man what the largest sources of carbohydrates in the world were, I would certainly have said that rice and corn (maize to most of the world) are at the top of the list (true), but any guess I might have hazarded for the number-three spot (such as potatoes, wheat, or soybeans) would have been wrong. A sign within an exhibit about the global anthropological significance of beer tells me that cassava holds that honor. I found that fact delightfully surprising because I had only a vague awareness of what cassava even is—as far as I knew, it was just not part of my experience as a resident of North America. (In fact, I’ve been eating it for years without realizing it, but we’ll get back to that in a moment.)

Cassava (Manihot esculenta) goes by many names, including manioc and yuca (not to be confused with yucca, which is an entirely different plant). It’s grown mainly for its tuberous root, which contains ten times as much starch as corn (its nearest competitor). It’s a staple food for at least half a billion, and perhaps closer to 800 million, people worldwide. It can be prepared in an astonishing number of ways—you can bake it, boil it, fry it, turn its flour into bread or noodles, or do just about anything else you can think of except eat it raw, because raw cassava will kill you.

Apart from some fiber and a fair amount of vitamin C, cassava doesn’t contain many nutrients. It does, however, contain cyanide (or, well, cyanogenic compounds that, during digestion, are converted to the form that can kill you). So before consuming cassava, one must treat it in any of numerous ways to remove the cyanide. Depending on the variety of cassava, this might range from a quick boil to days of fermentation (or more complex procedures), but luckily the plant also contains an enzyme that can convert the cyanogenic compounds into hydrogen cyanide (HCN), which can then evaporate or boil away. (Of course, if you’re so inclined—and many people in regions where cassava is a staple food are so inclined—you can use the cyanide you remove from your cassava as a poison to put on the tips of your arrows or spears.)

Cassava grows easily even in rough environments, including poor soil and near-drought conditions. It also has a very long harvesting window. These attributes contributed to its worldwide spread in popularity—though native to Brazil, it has for centuries been common in Africa and Asia. Nigeria is currently the world’s largest cassava producer.

I mentioned that I saw this sign in a beer exhibit, and that’s because cassava can be fermented not just to make it edible, but also to make cassava beer, or nihamanchi (there’s also a stronger version, called nihamanchnihamanchii, and I’d like to see you say that after imbibing cassava beer). The Shuhar people in Ecuador drink one to four gallons of cassava beer per day. Well, the adults do. Children drink only about a half gallon per day. So the sign tells me.

Weirdly, not one of San Diego’s 3.7 gazillion craft breweries makes cassava beer. But you can still find cassava here, or pretty much anywhere in the world, in the form of tapioca—those little starch balls in your pudding are in fact cassava starch.