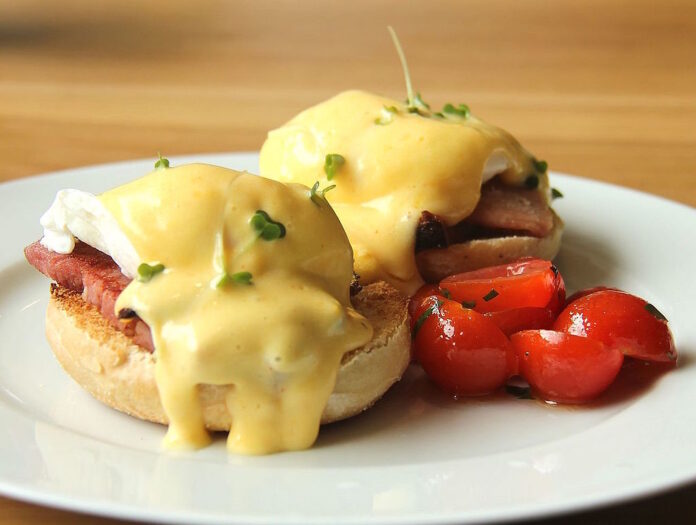 Image credit: By Jon Mountjoy [CC BY 2.0], via Wikimedia Commons

Let’s start with what we know for sure about Eggs Benedict. Well, it’s delicious, its taste exceeded only by its caloric content. Traditionally, this dish consists of, from bottom to top: half a toasted English muffin, a slice of Canadian bacon, a poached egg, and hollandaise sauce. There are countless variations (different kinds of bread, other proteins, etc.), but you can’t go wrong with the classic recipe, unless you’re a vegetarian or vegan, or can’t eat gluten, or keep kosher, or are on a diet. (Gluten-free, vegan Eggs Benedict is known as “lemon juice on a plate.”)

What I can’t say with certainty is where this dish, or its name, originated; there are several competing stories. We can say with certainty that the dish was invented no later than 1894, as that is the year Charles Ranhofer—a chef at Delmonico’s in New York—published a recipe for “Eggs a la Benedick,” in almost exactly its modern form. I also have no idea why April 16 is the day someone chose to celebrate Eggs Benedict, but on the other hand, if it’s on your list of acceptable foods, this is as good a day as any to enjoy it!