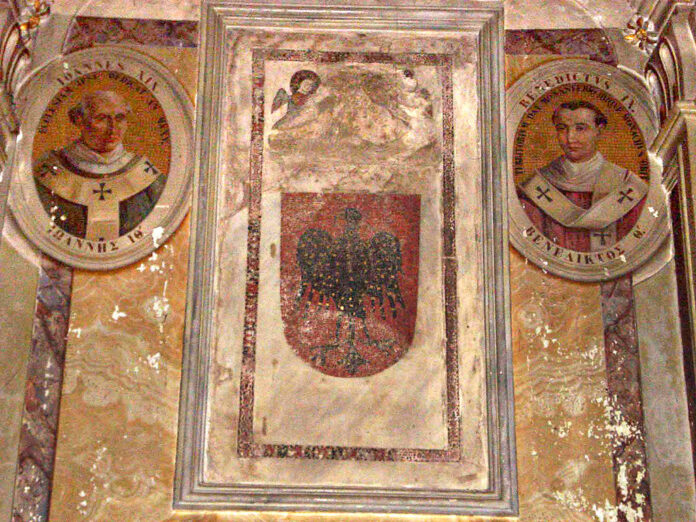 I am speaking, obviously, of Theophylactus of Tusculum, who was born in approximately 1012 and became Pope Benedict IX in 1032. (What, who did you think I was talking about?) And his story is in fact far stranger than that description may imply. The full account is long and sordid, but allow me to hit the highlights.

“All in the Family” Meets “The Godfather”

Benedict IX assumed the papacy in 1032 at the age of 20, and he essentially inherited the role. Two of his uncles had been pope (Benedict VIII and John XIX), and the family connections enabled his father to secure him the same position. (This was long before papal conclaves were a thing, and Benedict IX wasn’t the only pope to achieve his position via nepotism.) He excommunicated church leaders who opposed him, and reportedly spent a lot of time engaged in sexual debauchery of various kinds. He apparently embraced controversy and chaos.

Eventually, however, both the public and other clergy had had enough, and Benedict was expelled from Rome briefly in 1036. But he remained pope, and quickly returned (with some help from the Holy Roman Emperor, Conrad II). Eight years later, in 1044, a group of cardinals once again drove him out of the city and elected John, Bishop of Sabina as the new pope, Sylvester III. But Benedict raised an army, returned to Rome, and kicked Sylvester out, assuming the position of pope for a second time; Sylvester returned to functioning as a bishop, even while maintaining his claim to the papacy.

After less than two months back on the job, however, Benedict decided he wanted to get married. So he agreed to effectively sell the papacy for a large sum of money to his godfather, a priest named John Gratian. Benedict stepped down, and Gratian became Pope Gregory VI. Gratian reportedly used the Church’s own funds to buy off Benedict. But as odd as that sounds, it was sort of appropriate, in that Gregory VI was in fact a pious man who was trying to save the church and the papacy from his reprehensible godson.

Before long, however, Benedict had second thoughts. He returned to Rome once again, took over the city, and sat on the papal throne—although the Church still considered Gregory VI the true pope. Inconveniently, around the same time, Sylvester III also reasserted his claim to the papacy. In order to settle the dispute, King Henry III of Germany (who would shortly thereafter become Holy Roman Emperor) convened the a three-way pope-off called the Council of Sutri in December 1046. At this meeting, the council decided that none of the three should be pope, and they deposed both Benedict IX and Sylvester III, while asking Gregory VI to step down (which he did). So a German bishop named Suidger von Morsleben was appointed pope, and became Clement II.

But Benedict neither attended the Council of Sutri nor accepted its decision. Less than a year later, Clement II died of poisoning by lead sugar, and although it can’t be proven, it’s possible that Benedict had a hand in the poisoning. In any case, Clement’s death gave Benedict yet another opening. He seized the Lateran Palace (the main papal residence at the time) and declared himself pope again—for the third time. This stint didn’t last long, however. In July of 1048, just over eight months after his most recent accession, German troops drove him from Rome for good, and Poppo de’ Curagnoni, Bishop of Brixen, was elected as Pope Damasus II.

Benedict IX died about seven years later (in 1055 or 1056) at roughly age 43, and although the historical record is unclear, there’s some reason to believe he may have repented of his sins and lived out his days in obscurity at the Abbey of Grattaferrata.

So, just remember: appalling corruption at the highest levels of power is nothing new. But it doesn’t last forever, either.