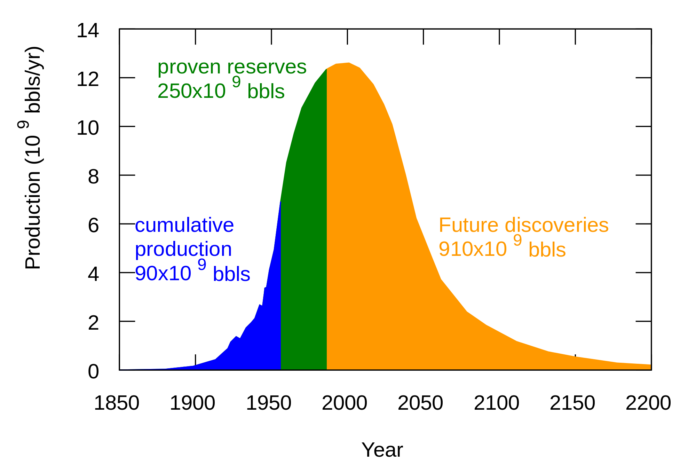 Whatever your feelings about the cost of oil, the means of obtaining it, or the effect that burning it has on the environment, one thing’s for sure: there’s a finite amount of it, so sooner or later it has to run out. At least, I hope so, because once all the oil’s gone, perhaps the planet will finally have a fighting chance against global warming. Many people, however, would take a decidedly negative view of the impending disappearance of the world’s oil reserves for all the obvious reasons. Either way, just how long will the oil last?

In 1956, a geophysicist named Marion King Hubbert developed a theory to predict future oil production. He assumed that for any given oil field, production follows a bell curve. After the well’s discovery, production quickly ramps up as new wells are added. But eventually, as the oil is drained from the underground reservoirs, the production rate hits a peak after which it begins to decline, eventually returning to zero. And what is true of an individual oil field should, Hubbert reasoned, be true for the entire planet as well. Using these assumptions and the best data he had available at the time, he plotted historical oil production on a curve and estimated that oil production in the United States would peak by 1970, and worldwide by the mid-2000s. The moment at which global oil production peaks came to be known as Peak Oil (or Hubbert’s Peak), while the overall theory that production of oil (or other products based on non-renewable natural resources) follows a bell curve in this way was called the Hubbert Peak Theory. After that time, there would of course still be plenty of oil, but the production rate would drop at about the same rate it rose, until eventually it was all gone.

So now, over 60 years later, how did those predictions work out? Within the United States, at least, Hubbert’s prediction seemed for a while to have been off by just a year, as domestic oil production did indeed peak in 1971. But after several decades of decline, the number started rising again, and in 2018, U.S. oil production reached an all-time high. That false peak was due, in part, to the development of new techniques for extracting previously unreachable oil (such as hydraulic fracturing, commonly known as fracking, and the exploitation of oil sands). Presumably, if Hubbert had access to current data and knowledge of the latest technologies, he’d have had to revise his date forward considerably.

What’s true in the United States also goes for worldwide oil production. Although it appeared for a while that we had in fact already passed the peak worldwide—perhaps in 2004 or 2005—newer estimates put the peak far in the future, though experts are seriously divided as to how far. For every apologist of Peak Oil there’s also a naysayer, and the arguments against the theory are both wide-ranging and passionate.

Numerous researchers have taken exception to Hubbert’s math as well as his fundamental assumptions. To some extent, it appears that he started with a theory and tried to come up with data to support it, rather than the other way around. There’s no particular reason to assume, a priori, that oil production should follow a bell curve. It could have any number of dips and spikes, for many different reasons, over a long period of time; the aforementioned development of new extraction techniques is a case in point. Another type of claim is that anyone who buys into Peak Oil must have an agenda, either political or financial in nature; oil simply can’t, mustn’t, and won’t disappear any time soon. In any case, most critics admit that yes, there must logically be a worldwide peak in oil production eventually—with an end to oil production some time long after that—but that whenever this happens, it will be so far in the future as to make worrying now seem silly.

Increasingly, commentators have noted another factor: demand. Hubbert didn’t envision decreasing demand for oil, but if that occurred, then ipso facto, production would also decrease. Indeed, it looks increasingly likely that within our lifetimes, that will happen—even if peak production capacity has not occurred. In other words, “peak” doesn’t necessarily mean what Hubbert thought it meant.

But the most surprising criticism of Peak Oil is based on the claim that Earth can never run out of oil, because it simply keeps manufacturing more. We all learned in school that oil is a fossil fuel, created over many millennia by heat and pressure acting on the remains of plants and animals that lived and died eons ago. Because all that biological matter hasn’t been regularly replenished, once the planet’s supply of fossil fuel is gone, it’s gone. But according to supporters of the abiogenic petroleum origin hypothesis, oil never came from biological matter at all. It’s produced within the Earth’s crust and mantle by heat and pressure acting on ordinary and plentiful substances such as carbon dioxide, hydrogen, and methane. And what’s more, the production of new oil has never stopped: look in the right places in the right ways, and you’ll see oil reservoirs being replenished. This hypothesis first appeared in the 1870s, but it has never had much traction outside Russia and the Ukraine. Still, that hasn’t stopped Peak Oil opponents from using it to bolster their position.

Well, what if oil did run out—and what if that happened within, say, the next few decades? Once again, the reactions to this scenario vary dramatically. Some predict it will lead to a collapse of the worldwide economy, mass starvation, and perhaps even the end of the human race. Most pundits say it won’t be that bad; between now and then, we’ll develop the necessary technology to replace oil with something else for large-scale applications such as transportation; given the rapid progress in electric vehicles, that seems entirely plausible. And in between are survivalists who fear the worst but are figuring out how to live petroleum-free lives when the day comes.

What I find most striking about this entire debate is its emotional intensity. Websites both pro and con often consist of extremely long, sometimes boring, and often inscrutable rants accusing the other camp of all sorts of diabolical motives, along with insults and name-calling a-plenty. And all this over a theory that might never be proven one way or another—we could always end up finding massive, unexpected oil reserves (or easy ways of getting at more of the existing oil) far in the future, creating an entirely new production curve. Meanwhile, we already have the technology to generate our own oil from garbage, an infinitely renewable resource.

In short, if you want to worry about the price of oil, fine. If you want to worry about global warming, fine. I heartily support any and all efforts to develop alternative energy sources, conserve fuel, and protect the environment. But I can’t bring myself to worry about running out of oil. Either it will happen or it won’t, and if it does, it’ll be either sooner or later. But my money is on much later, by which time I fully expect the world will have either gotten over its oil dependence for other reasons or destroyed itself in any of several increasingly plausible ways. Either way: nothing to worry about.

Note: This is an updated version of an article that originally appeared on Interesting Thing of the Day on July 17, 2006.