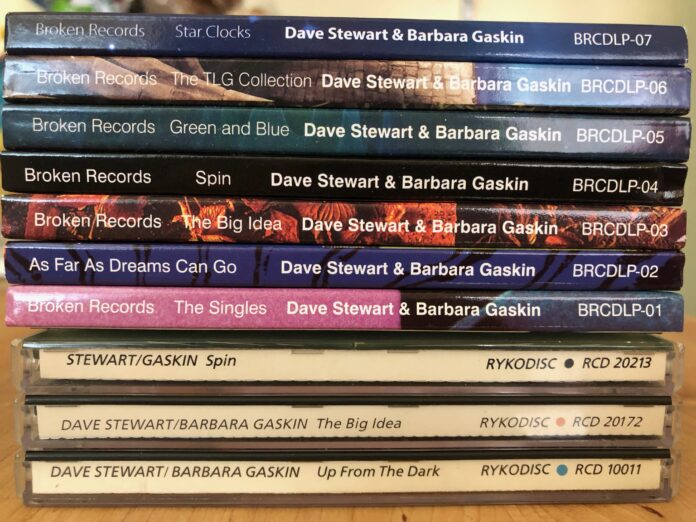 In 1985 I was attending college in New York, and in the great tradition of young people wasting the best years of their lives “experimenting,” I developed an addiction—to synthesizers. I bought what was to be the first of many keyboards and spent countless hours tweaking sounds when ordinary people my age were busy getting drunk and forming bad social habits. I wasn’t much interested in writing songs; what fascinated me most was the process of creating interesting timbres.

I subscribed to Keyboard Magazine, which encouraged my habit in two different ways. First, each issue convinced me that I absolutely needed the latest electronic musical gadgets, thus ensuring a state of perpetual credit card debt. But the magazine also taught me a number of practical skills for making music. One of the magazine’s features at that time was called a Soundpage—a tear-out “Flexidisc” plastic phonograph record. Each month, some well-known keyboard player would put together a special recording, along with an article describing the music and the techniques used to create it.

These Are the Daves I Know

Dave Stewart was the featured artist in the December 1985 issue. The Soundpage article began: “Dave Stewart insists that the other Dave Stewart, co-founding member of the Eurythmics, is not related to him, even though they’re both British, play keyboards, accompany female vocalists, and wear glasses.” (This Dave Stewart had been in the bands Egg, Hatfield & the North, and Bruford; vocalist Barbara Gaskin was once in Spirogyra.) I listened to the recording of “Henry and James” and was instantly hooked. Though the style could be called “synth-pop,” I had never heard music like this. The instrumentation was entirely electronic, but the sounds had been crafted with such skill and care that you could easily forget that fact. In contrast to the prevailing custom, synthesizers were used to maximum musical effect, not to call attention to the fact that the artist was using the latest gear. Meanwhile, Barbara Gaskin’s vocals were hauntingly beautiful, utterly obscuring the song’s rather odd subject matter: two dronelike office workers. I played the single until it was nearly worn out.

Naturally, I had to have more. But their first album, Up From the Dark, was available only on CD. I didn’t have a CD player at the time or even know anyone who did, but I decided I’d buy the CD anyway and figure out how to play it later. I looked in record stores for the next five years and simply couldn’t find it anywhere. Once a store said they’d special-order the CD for me, but it never arrived. I wondered if I would ever hear more of Dave Stewart & Barbara Gaskin.

Then, in 1990, I casually mentioned Up From the Dark to a friend of mine in Texas. “Oh yeah, I have that,” he said. “It has the ‘Siamese Cat Song’ on it; I bought it for my kids.” I was flabbergasted: my quest had ended. After listening to a cassette copy for a few months, I finally tracked down the CD in a used record store. Shortly thereafter, Dave Stewart & Barbara Gaskin released another album, The Big Idea, followed by Spin in 1991.

The music on those three albums is quite diverse. Many of the songs are extremely inventive covers—including such strange bedfellows as “Subterranean Homesick Blues” (Bob Dylan), “Amelia” (Joni Mitchell), and “Leipzig” (Thomas Dolby). It was also on Stewart & Gaskin CDs that I first heard “8 Miles High,” “Walking the Dog,” and “It’s My Party,” their version of which became a #1 hit in the U.K. But Stewart’s original compositions, like “Henry and James,” “The Cloths of Heaven” (based on a poem by Yeats), and “Golden Rain,” are my favorites. Although the styles of music vary, the masterful orchestrations, clever interpretations, and luscious vocals give it all a distinctive coherence.

Stewart & Gaskin refer to their work as “pop music for grown-ups.” That’s a terrifically apt description. The songs’ subject matter is sometimes serious and sometimes silly, but it never degenerates into the meaninglessness of most commercial pop music. The duo’s unique mixture of intelligent lyrics and interesting music results in a distinctive style. I think of it as the musical equivalent of gourmet macaroni and cheese: familiar and comforting, yet rich and sophisticated—skillfully made with quality ingredients and adorned with subtle garnishes. The songs tend to have the overall structure, rhythm, and length of pop songs, but an entirely different texture, if you will—one that especially appeals to people who appreciate technical excellence in musical composition, performance, and yes, synthesizer programming.

After the major labels dismissed Stewart & Gaskin’s music as “too uncommercial,” they started their own label, Broken Records. The lack of commercial pressure allows them an unusual level of artistic integrity and creative freedom. But apart from the occasional odd remix, re-release of a CD single, or compilation album the duo produced no new music for many years after 1991. Every now and then I’d check in on their website, which perpetually promised that a new album was in the works, but after 18 years, I’d pretty much given up hope.

And then, in 2009, much to my surprise and delight, that long-promised album, Green and Blue, finally appeared. In fact, because Stewart & Gaskin had accumulated more new music than would fit on a single CD, they simultaneously released a five-track EP called Hour Moon with the remaining songs (including the Soundpage version of “Henry and James” I’d fallen in love with back in 1985), followed several months later by the 14-track The TLG Collection, featuring rare and unreleased tracks. The following year, they released two new Special Edition CDs: Broken Records: The Singles and As Far As Dreams Can Go, both of which include reworked and extended versions of earlier tracks. The following year, two more Special Edition CDs appeared—updated versions of The Big Idea and Spin.

Apparently Stewart & Gaskin felt that collection of music should be enough to last fans for quite a while, because more than seven additional years would pass before their next offering. In January 2019, the duo released another full-length studio album, Star Clocks. The sound is just what I’ve come to expect from Stewart & Gaskin, including occasional lyrical and musical callbacks to their earlier hits. But as an example of how thoroughly they’ve rejected commercial pop expectations, the average song length on this 11-track album is a full seven minutes.

My one fond wish, which will probably never come true, would be to see a live performance by Dave Stewart & Barbara Gaskin. The duo rarely tours—I’ve found records of a handful of concerts over the years in the U.K. and in Japan, as well as one in Los Angeles back in 1991. But that’s about it. Furthermore, Stewart & Gaskin apparently have a philosophical objection to releasing video recordings of their concerts, so I may not even get a second-hand impression of what their live performances are like. On the other hand, Stewart says that they have no plans to retire and expect to keep making new music for years to come. I sure hope so.

Note: This is an updated version of an article that originally appeared on Interesting Thing of the Day on April 19, 2003, and again in a slightly revised form on March 18, 2005.