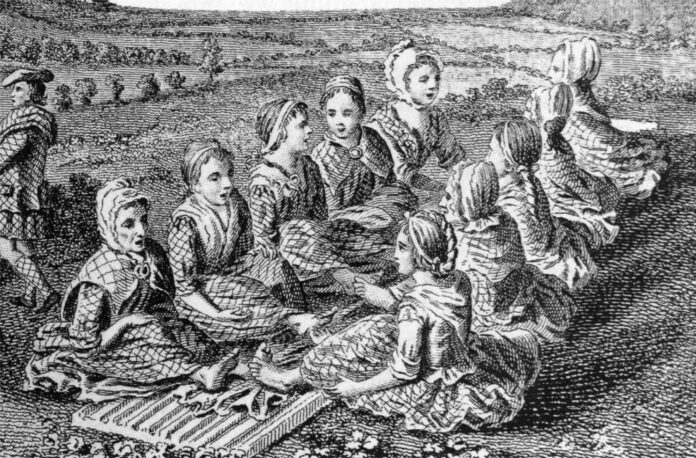 When I was young, my Dad had a record featuring songs and comedy sketches by the comedian Peter Sellers (formerly of “The Goon Show”). I loved to listen to it so much that even today, I can recite nearly the entire album from memory. One sketch in particular sprung to mind when I sat down to write this article. Sellers plays a German folk music aficionado, who is rather stiffly introducing his field recordings. “Ziss recordink is of Scottish mouth music.” He pauses. “Played on ze mouth.” Actually, what followed wasn’t mouth music at all, but a drunk Scotsman singing on a street before getting run over by a bus, but it was the first time I had ever heard the term. I didn’t hear real mouth music—or puirt-a-beul in Gaelic—until many years later.

Surely music “played on the mouth” is just what most people refer to as singing? Well, yes and no. Genuine puirt-a-beul (pronounced porsht-ah-buhl) has a number of distinctive features which mark it out from standard singing. Mouth music is a primarily rhythmic form of song, where the words are chosen for their rhythmic qualities and the patterns of sound they make. Consequently most of the lyrics are more or less nonsense, but sometimes they take the form of puns or tongue twisters. Some songs contain syllables called “vocables,” which are chosen to sound like a particular instrument, or as a kind of sound effect to fit in with the meaning of the song. One of the reasons that I love mouth music is that it is a truly representative form of folk song; even the poorest of people can afford to use their own voices, so the songs record the everyday lives of ordinary people. The music itself is really striking to listen to, with a driving, toe-tapping rhythm. Expert mouth music singers will tell you that the hardest thing to learn is when to breathe, because the rhythm can’t be broken. Listening to Talitha MacKenzie singing “Sheatadh Cailleach” on the album Sòlas, and reading along with the Gaelic lyrics, I always marvel at how she can possibly fit all of the words in, such is the speed and complexity of the song.

Mouth music served three distinct functions, the first of which was to provide music for dancing. The majority of people would have been unable to afford musical instruments, but there was also a ban on the pipes after the 1745 Jacobite uprising, which ended in the notoriously bloody battle at Culloden, and victory for the English king, George II. Anything associated with the Highland clans or Gaelic tradition was ruthlessly suppressed, but by using their own voices, the people could still enjoy dances and traditional tunes, while leaving no incriminating evidence. The words are chosen to represent the dance steps of traditional dances, and the rhythm is so strongly ingrained in the structure of the words that it can be used to accompany dancing even if it is spoken rather than sung. This type is thought to be the most technically difficult form of mouth music to sing because of the fast tempo and complex rhythms.

Singing While You Work

The second function of mouth music was to alleviate the tedium of manual work. These songs—known as “waulking songs” or orain luaidh—were sung as tweed cloth was “fulled” or “waulked.” When tweed is newly woven, it is rather loose and not at all wind-proof. Since Harris tweed is supposed to be able to stop a Highland gale, the cloth needs to be worked to plump up the fibres and shrink the weave. Traditionally this was done by soaking the cloth in stale urine, and then sitting around a table, pushing, pulling and pounding the cloth around (always passing it clockwise), until the fibres shrank. The whole process could take hours, and as you might imagine was a tiring, boring and—above all—smelly process, and singing while you worked helped to pass the time. The waulking songs usually took the form of “call and response,” with one person singing the verses, while everyone joined in on the choruses. In Scotland, waulking was done exclusively by women, so the songs tend to be light-hearted, teasing each other about their sweethearts, and including a fair measure of ribald gossip. In Nova Scotia, Canada, waulking was done by men and women together. I’ve never heard any Nova Scotian waulking songs, but I’d be fascinated to know whether the tone of the songs was changed for mixed company. Many countries have similar forms of work songs, like sailors’ sea shanties, or West African work music. In fact, waulking songs have a very similar feel to traditional West African music and an odd affinity with them, which probably accounts for the popularity of bands like Mouth Music and Afro Celt Sound System, who blend the two styles.

Editor’s note: The album Mouth Music (the debut release by the band of the same name) features Talitha MacKenzie as vocalist, and it actually does contain mouth music (puirt-a-beul), as described in this article. However, later albums by Mouth Music adopted a different style and a series of other vocalists.

Finally, mouth music was used to help musicians to remember and pass on traditional tunes, or to practice the music when they did not have an instrument available. Most traditional musicians would not have read music, so they would learn songs by playing with others, and by singing the tunes. A further style of mouth music (more often employed in Ireland) going by the charming name of “diddlage,” uses vocables sounding like the fiddle to represent the tunes. For many fiddlers, the sounds of the mouth music are inseparable from the tune actually played on the fiddle. There is even a form of mouth music—called canntaireachd or cauntering—in which the singer imitates the sound of the bagpipes to learn the tunes. Given the limited volume of the human voice, this can be a much more pleasant way to hear the bagpipes than the real thing! Again, these traditions are not restricted to the Celtic people; in India, players of the tabla (a small, expressive drum) learn and pass on tabla rhythms via a spoken notation called bol, in which onomatopoeic words stand for particular strokes.

Take Your Music with You

One of the most striking things about mouth music, when you come to look into it in detail, is the way that it reveals the migration, inter-mingling, and social history of people over time. Many people of Celtic origin in Scotland, Ireland, and Brittany, France already shared a similar tradition of music. In the 17th century, French peasants (including those from Brittany) were “cleared” from their land by rich landowners, and had to emigrate to Eastern Canada. Around a century later, Scottish highlanders were also involved in clearances, and many also ended up in Canada, in the region now called Nova Scotia. The French settlers (Acadians) got moved from place to place by political problems, and settled successively in Cape Breton, the Appalachian mountains, and eventually Louisiana, where they became known as Cajun. So there is a local version of mouth music found in Nova Scotia, and a rich gumbo of vocal tradition in Cajun Louisiana, where French and Celtic mouth music met the traditions of African and Caribbean slaves.

Note: This is an updated version of an article that originally appeared on Interesting Thing of the Day on August 4, 2003, and again in a slightly revised form on March 16, 2005.