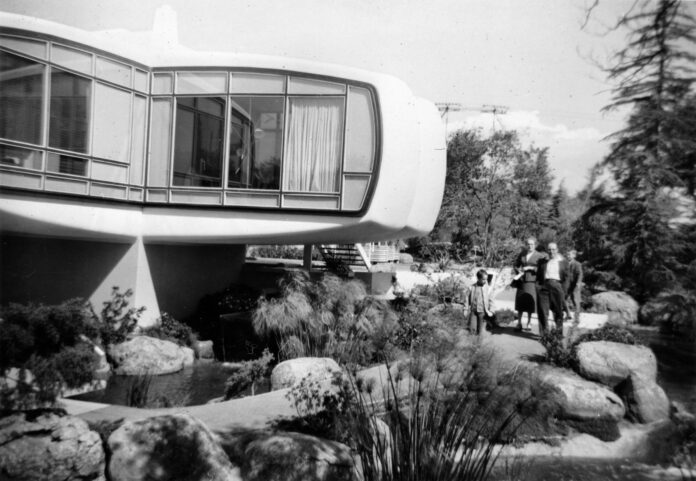 I’ve always been intrigued by alternative building methods and materials. I know, for example, that domes (of the geodesic or monolithic concrete varieties) are strong, inexpensive, and easily built, and that straw bale houses provide excellent insulation. Were I planning to build my own house, I might consider any of these options, as well as adobe, brick, stone, glass block, and good old-fashioned wood. But when I heard recently that Disneyland had once featured an all-plastic house, I just boggled. It did not amaze me in the slightest that such a structure was possible, but I couldn’t get over one huge question: Why? Why in the world would anyone build a house out of such a gauche material? And who would want to live in such a house?

When Disneyland opened in Anaheim, California in 1955, one of its most popular themed areas was Tomorrowland, where visitors could get a taste of what life would be like in the near future. At that time, commercial plastics were still new enough, and exotic enough, that they excited the public’s imagination—any vision of the future must contain a great deal of these futuristic materials. One of the largest manufacturers of plastic products at that time was Monsanto, a sponsor of numerous Disneyland exhibits. The company was looking for ways to expand its markets, and at the same time gather data on the practicality and desirability of various plastics as construction materials. At Monsanto’s behest, the Massachusetts Institute of Technology had spent years designing an entirely plastic house; actual construction began in 1956. When Walt Disney heard about the house, he offered to let Monsanto display it at Disneyland. After the House of the Future was finished in 1957, it began attracting crowds at the rate of about 10,000 people per day.

The single-level house, whose exterior was fashioned from prefabricated fiberglass modules, looked like a giant white + sign. The center rested on a pedestal, while the four cantilevered wings “floated” above the ground. Each of the wings was a single room (master bedroom, children’s bedroom, living room, and dining/family room); the center of the house contained the kitchen and a bathroom. The house’s main attraction was that the building itself and virtually everything inside was synthetic—the furniture, the upholstery, the carpets, the dishes, and even the clothes in the closets. (The windows were made of glass, and there were of course some metal fixtures.)

Monsanto described the house as its prediction of what life would be like in 1987—an impossibly distant 30 years into the future. As such, the house naturally contained such marvels as a “revolutionary” microwave oven (which was functional). It also contained a number of non-functional mockups of devices that would surely be commonplace in 1987, such as an ultrasonic dishwasher, video intercoms, and a large, wall-mounted, flat-screen TV (missed it by that much). Because visitors could walk through the house just as a real family would, it seemed entirely believable—if one example could exist, there was no reason to believe others couldn’t be made as well. And apparently, guests frequently claimed that they wanted, and would pay for, such a house. But it was merely a proof of concept; Monsanto had never intended to get into the prefab house business.

According to the marketing materials Monsanto provided, the appeal of plastic was self-evident: it was durable, long-lasting, easy to clean, waterproof, impervious to rot, and so on. These claims are true enough. But Monsanto also described the house and its fixtures using words like “warmth,” “charm,” and “beauty”—as though they could will those characteristics into existence simply by stating them. Perhaps visitors really did think an all-synthetic living room could be warm and cozy 50 years ago, but I find it quite amusing that a comment like “Hardly a natural material appears in anything like its original state” was considered an enticing selling point. Far from being warm and charming, the pictures I’ve seen of the house strike me as sterile and soulless. But, well…that’s me.

By 1967, public expectation about the future had changed significantly. Some elements of the House of the Future had already become commonplace, while others seemed less and less likely. The overall shape of the house, too, had gone out of style and looked increasingly dated. So after showing the house to some 20 million visitors, Disney decided to tear it down. An oft-told story, which may be apocryphal, is that the house was so indestructible that a wrecking ball bounced right off it; it took weeks to dismantle the structure by hand.

If nothing else, the House of the Future epitomized the vaporware future of the 1960s—the shiny, labor-free, robot-assisted, flying-car lifestyle that, the media assured, was just around the corner. Ten years. OK, maybe 20 or even 30, but basically imminent—definitely in your lifetime. Modern visions of the future tend to be a lot more conservative, a lot grungier—in other words, a lot more like today, with maybe a bit more gadgetry. And as much as I mourn the loss of that once-imagined future, I fully expect the actual future to be full of lovely natural materials.

Note: This is an updated version of an article that originally appeared on Interesting Thing of the Day on May 3, 2005.