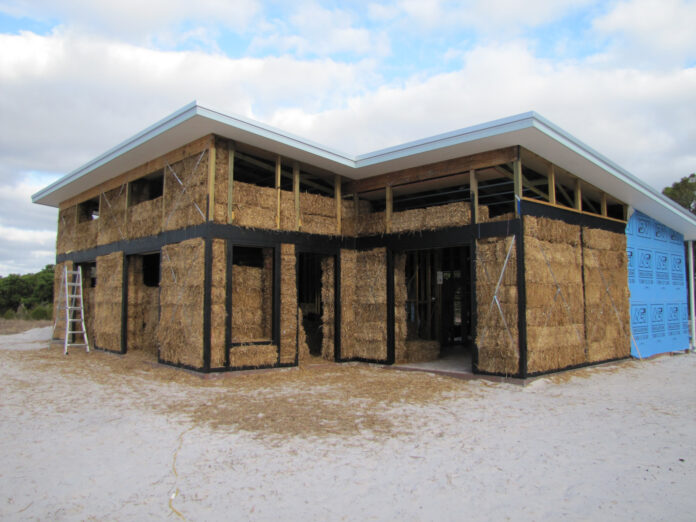 One year, the company I worked for had a big Halloween celebration. One of my coworkers decided that a group of us needed to dress up as the Three Little Pigs and the Big Bad Wolf. So she worked for days sewing costumes for all of us, and even brought in plastic pig noses for us to wear. For an authentic touch, she asked that we also decorate our desks with the building materials featured in the story. I got the short straw (so to speak) and ended up making a pathetic mess by scattering straw all around my desk, and the “pig” who used sticks didn’t fare much better. But our colleague with the brick “house” simply printed out a huge brick pattern on a large-format color printer and wrapped it around his desk. In life as in the story, his design was clearly the best.

It is difficult to set aside the bias that straw is an inappropriate building material, even knowing that wolves lack the lung capacity to blow down a straw house. And yet people have been building sturdy, comfortable houses out of straw bales for more than a century. This building technique has been, shall we say, a bit slow to catch on—and is not without its limitations. But using straw as a building material turns out to have some interesting merits.

Straw is what’s left over when grains like wheat, barley, or rice are harvested—basically the hollow stalks. Unlike hay, which can be used to feed animals, straw is a nearly useless agricultural byproduct. Millions of tons of straw must be burned or otherwise disposed of each year. Inconveniently, it doesn’t even decompose rapidly. Automated baling machines, invented in the 1890s, compact straw into tightly compressed blocks, so that they will at least occupy as little space as possible. Faced with a surplus of straw bales, a lack of trees, and a cold winter approaching, some settler long ago decided to stack up the bales and use them as the walls of a house. This worked surprisingly well, and after years of refinement, straw bale construction is beginning to gain respect as a mainstream technique.

In a typical design, walls made of straw bales are held together and reinforced with rebar (or sometimes, wooden or bamboo stakes). Sometimes walls made entirely of straw bales support a roof; in others, a conventional wooden frame is used as the load-bearing structure while the straw bales form the exterior shell. Straw will rot if exposed to moisture, so to keep it dry, both interior and exterior surfaces are sealed with plaster, stucco, or adobe. The net effect is that walls of a finished straw bale building look just like any other wall, only a bit thicker.

One of the strongest arguments for using straw as a building material is that it saves lumber. Even if wood is readily available, straw is invariably much cheaper. It’s a rapidly renewable resource, and one that usually goes to waste. A wall made of straw bales also has dramatically higher insulating properties than a standard wooden wall, making buildings that use them quite energy-efficient. Straw bale houses are also easier to build than wooden frames, even by people with little experience.

Studies performed by various universities and government organizations have shown that a properly constructed straw bale house, sealed well with plaster, is actually less susceptible to damage by fire than a wooden building. Although you wouldn’t build a high-rise condo out of straw bales, a carefully designed one-story building is also quite safe in an earthquake. Owners must be careful to keep all cracks sealed, though, because once infiltrated by moisture, bugs, or rodents, a straw bale wall will rapidly lose its integrity. Last but not least, straw bale buildings are extremely resistant to damage by wind. So much for the Big Bad Wolf.

Note: This is an updated version of an article that originally appeared on Interesting Thing of the Day on October 24, 2003, and again in a slightly revised form on January 7, 2005.