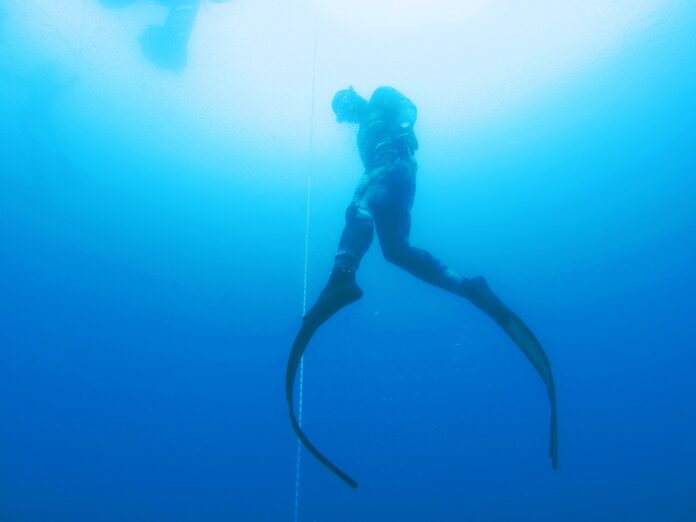 Lifeguards at public swimming pools don’t like it when you disregard the signs that say “Walk, Don’t Run!” But they like it even less when you don’t move at all. As a lifeguard is scanning the pool, the last thing they want to see is a body floating face-down and motionless in the water. I remember getting yelled at for doing exactly that when I was about 10 or 12 years old. I couldn’t understand what the problem was. I wasn’t bothering anyone, I was just enjoying the sensation of holding my breath, floating, and staring at the bottom of the pool. But the lifeguard reprimanded me: “You have to keep moving! Otherwise I won’t know if you have drowned.” I thought that was unfair, because kicking around in the water isn’t as relaxing or serene as just floating there, but ever since then, as a courtesy to those who could not discern my state of consciousness from a distance, I have refrained from floating face-down.

Little did I realize that what I was doing would soon be a major competitive sport.

Serious breath-holders would call what I was doing Static Apnea—just one of several categories of the sport of freediving. The current world record for Static Apnea is held by Serbian diver Branko Petrović, who floated in a swimming pool while holding his breath for eleven minutes and fifty-four seconds. That is, if I may say so (and pardon the pun), an unfathomably long time. But it’s just the tip of the iceberg. Freediving is all about pushing the limits of physical and mental endurance, defying common sense all the way.

Freediving is the name for a class of activities that involve holding one’s breath underwater for an extended period of time. In its simplest form, freediving is a low-tech alternative to recreational scuba diving. Although freedivers can’t stay submerged as long as divers who use tanks and regulators, they can move much more quickly and freely without the drag caused by the equipment. It’s a quieter experience too, and with fewer bubbles there’s less chance of scaring off fish. The only equipment required is a mask, wetsuit, and extra-long fins, making it a less expensive pastime than scuba diving as well.

The Length and the Breath

But when you start talking about competitive freediving, it begins to sound like a sport that could only be appreciated by someone whose brain had been deprived of oxygen a bit too long. Static Apnea is all well and good, but serious freedivers consider that just the first step. Dynamic Apnea ups the ante by requiring the diver to swim horizontally underwater; the idea is to cover as much distance as possible without taking a breath. Separate categories exist for divers using fins and those without. But then things start getting really interesting. In the other major forms of freediving, a rope (with markings to indicate depth) is dropped to the sea floor, and the objective is to follow the rope as deep as possible before returning to the surface. In a Constant Ballast dive, divers must descend and ascend under their own power; they can optionally use a weight to help them descend but they must carry the same weight on the way back up. Free Immersion is similar, except that the diver can pull on the rope to assist in the descent and ascent. Then there’s the Variable Ballast dive, in which a weighted sled takes the diver farther down into the water; the diver then leaves the sled to ascend under his or her own power. If that’s not challenging enough, a No Limits dive uses the same weighted sled to go even deeper, at which point the diver inflates a lift bag to facilitate a speedy ascent.

Austrian diver Herbert Nitsch currently holds the world record for No Limits free diving, generally considered the most challenging category. On June 14, 2007, he made a record No Limits dive of 214m (702 feet). But freediving is intensely competitive, and records are set and broken with astonishing frequency. The endless push to go deeper and longer is, not surprisingly, very risky, even for extremely well-trained divers. In October 2002, world-renowned freediver Audry Mestre died in an attempt to break the record at the time with a dive of 170 meters. A combination of equipment malfunction and human error prevented her from ascending fast enough, despite the numerous safety measures that are always taken during dives of this sort. Similarly, in November 2013, Nicholas Mevoli from New York died in an attempt to break the Constant Ballast Without Fins record. But these tragedies seem to have had a galvanizing effect on the freediving community, inspiring them to push themselves even further as a tribute to their lost comrades.

If you think about other mammals that hold their breath to make extended dives—whales, seals, and sea lions—freediving doesn’t sound all that crazy. Human physiology is quite a bit different, but research has shown that with training, almost anyone can develop the ability to hold their breath for three or four minutes. Still, there’s a big difference between holding your breath on the surface of a nice, safe swimming pool and doing the same thing under hundreds of meters of water. That requires stamina, guts, and probably a little insanity.

Note: This is an updated version of an article that originally appeared on Interesting Thing of the Day on July 30, 2003, and again in a slightly revised form on March 22, 2005.