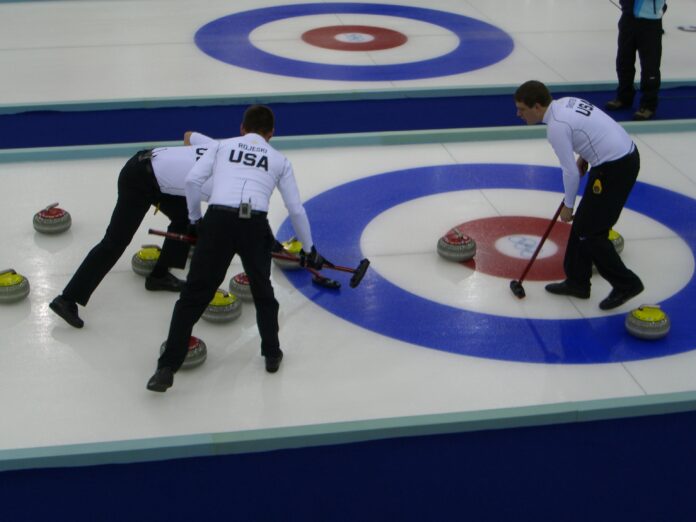 With apologies and all due respect to my Canadian friends and relatives, I have never had the remotest interest in hockey. I’ve tried to watch it a few times, but always found it tedious and hard to follow. Even though the pace of the game is often frantic, there is typically a lot of time between goals, during which I can rarely tell where the puck actually is. Where confrontations between players seem to be the most exciting part of the game for many fans, I don’t enjoy watching people knock each other around. There is, however, another popular Canadian sport that involves sliding objects around on ice: curling. Unlike hockey, curling moves at a fairly slow pace and doesn’t require protective gear.

When I first heard a description of curling, it sounded too weird and dull to attract my interest. But the first time I saw curling on TV, I had a revelation. “Oh,” I thought, “it’s just like boules on ice.” There is a class of games, including lawn bowling, bocce, boules (or pétanque), shuffleboard, and (in some cases) marbles, that all have the same basic idea in common. Taking turns, competitors launch (throw, roll, or slide) a projectile (ball or puck) toward a target. After several rounds, the player or team with the projectile closest to the target wins; a large part of the strategy is displacing your opponent’s projectiles while protecting your own. I don’t have a name for this general type of game, but once I realized curling fit into this familiar category, I warmed to it considerably.

Although curling is, at a high level, similar to these other games, it is nevertheless unique in several ways. For starters, it’s the only one played on ice. A curling rink may have one or more playing surfaces, which are sheets of ice 146 feet (44.5m) long by 14 feet 2 inches (4.3m) wide. At the end of each sheet is a circular bull’s–eye-like target painted under the ice, consisting of a ring 12 feet (3.7m) in diameter with two smaller concentric rings and an inner circle called the button, which is the ultimate objective. The projectiles are granite stones (sometimes called rocks) about 12 inches (30.5cm) in diameter and weighing up to 44 pounds (20kg). Handles on the tops of the stones enable the players to control them. Each team consists of four players, and each player has two stones. Starting at one end of the ice, a player “throws” (slides) the stone toward the target. Teams alternate until all the stones have been thrown, at which point the score is counted. Only stones partially or completely within the outer ring of the target can be scored. The team with the stone closest to the tee—the center point of the button—wins that end (or round), collecting one point for each of their stones that’s closer to the center than any of the opposing team’s stones. After eight or ten ends, the team with the highest score wins.

(Note: The exact rules of curling, including the dimensions of the playing surface, vary somewhat from country to country and depending on the level of play. The information here is based on standard Canadian rules.)

Whence the name curling? The stones have a tendency to curve, or curl, as they slide down the ice, a phenomenon familiar to anyone who has gone bowling. Because of imperfections in the surface of the stone and the ice, some amount of curl is inevitable, but by putting a deliberate spin on the stone as it’s thrown, players can control the direction and extent of the curl and use it to their advantage. But the stone’s fate is not sealed as soon as it’s thrown. As the stone slides toward the target, one or two players slide in front of it, sweeping the ice vigorously with small brooms or brushes. To a casual observer this may appear goofy or even pointless, but it’s a crucial part of the game. By brushing the ice, the sweepers are actually polishing it, giving the stone a smoother surface to slide on and thus extending its range. Sweeping can also influence the direction of the stone somewhat. So by skillful sweeping, players can aim a stone with great precision, making the competition much more complex.

The origin of curling is lost in the mists of time, but some form of the sport has been around since at least the mid-1500s; versions of curling have been known for centuries in Scotland, the Netherlands, and elsewhere in northern Europe. In any case, it was Scotland where the game matured and achieved popularity, and where you can still find the highest number of curlers per capita. Curling is extremely popular in Canada and parts of the United States, too, as well as in Australia, New Zealand, and a number of European countries. As early as 1924, curling made an appearance at the Olympics as a demonstration sport, but it did not achieve status as an official, medal event until 1998. I noticed that it got a lot more attention during the 2018 games than it had previously, even in mainstream U.S. sports coverage, so perhaps it’s starting to enter the wider public consciousness.

Curling is not just a game; there’s an entire culture built up around the sport. For one thing, it’s a highly social event, and in areas where curling is popular, it is often seen as a focal point of community life. Curling clubs have much the same feel as bowling leagues; most people play not to become international stars but for the sheer fun of friendly competition. (Another inevitable comparison to bowling: special shoes. Curlers usually have one slippery shoe to glide on, and one with traction for control.) At local and regional levels, curling is ordinarily not refereed; decisions on scoring and penalties are made between the two teams on the basis of fairness and good sportsmanship. After a game, opposing teams typically join in a social gathering known as “broomsticking.”

Curlers play to win, of course, but the spirit of curling puts honor and relationships above winning and losing. Naturally there are exceptions, but curling is about as far as you can get from the ruthless competition of highly commercial sports. For better or worse, curling is not the most engaging spectator sport; it has been compared to watching a chess match. But like chess, underneath the simple rules is a subtle and deeply strategic game. Its main piece of equipment tells the whole story: curling rocks.

Note: This is an updated version of an article that originally appeared on Interesting Thing of the Day on August 6, 2003, and again in a slightly revised form on June 30, 2004.