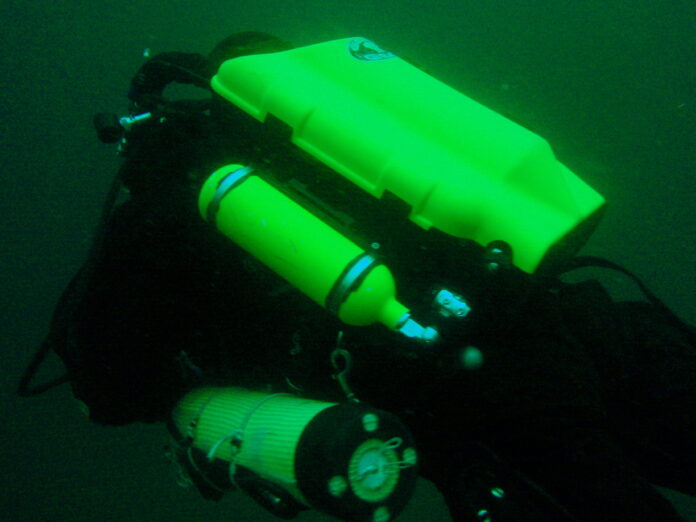 If I end up completing all the tasks on my Life’s To Do List, I’ll live to be a very old man indeed. So many places to visit, books to read, foods to try, experiences to have—and the list is perpetually growing. “Learn scuba diving” is on the list, but like “visit Machu Picchu” or “have sushi at Sukiyabashi Jiro,” it’s something that requires a greater investment of time and money than I am able to make at the moment. Still, it’s something I’d like to do if the opportunity ever presents itself. Yes, there’s a lot of fascinating stuff underwater—the marine life, the shipwrecks, and all—but equally appealing is the geek factor. Scuba diving requires lots of cool, specialized equipment, and just think of the entirely new range of dive-enhancing gadgets I could justify buying!

Then perhaps one day, if I become sufficiently advanced and still have some money to spare, I’ll invest in the ultimate piece of scuba gear: a rebreather. This fabulous piece of kit could set me back as much as US$20,000, not to mention the extensive additional training and certification I’d need to use it. But a rebreather does for scuba diving something like what a hybrid engine does for a car: it provides much greater fuel efficiency while reducing noise and pollution. These things may not seem like a big deal on the road, but underwater, they can make all the difference in the world. (Rebreathers are also used in spacesuits and gear for mountaineering and firefighting, among other applications, but I’ll focus on the underwater use here.)

In ordinary scuba diving, you have one or more tanks of air—or, depending on what sort of dive you’re undertaking, a mixture of oxygen with nitrogen, helium, or other gases in carefully measured proportions. Regulators deliver just the quantity of air you need, at an appropriate pressure, through a mouthpiece; when you exhale, a valve releases the used air into the water. Each time you take a breath, though, your lungs absorb only about a quarter of the oxygen in the air; the rest is exhaled along with the carbon dioxide you produce. So a lot of the oxygen divers take with them is essentially wasted. The deeper you dive, the more rapidly you use up air, so a dive’s maximum duration is determined by its depth and the number of tanks a diver carries. Even though air tanks don’t feel heavy underwater, there are practical limits to how much a diver can carry, and thus limits on the duration of a dive.

Rebreathers change this equation by recirculating the unused oxygen from every exhaled breath. Instead of being expelled into the water, the used air is channeled into a “scrubber,” an assembly that uses a chemical such as a soda-lime mixture (sodium hydroxide and calcium hydroxide) to absorb the carbon dioxide. That leaves a good bit of usable oxygen, which is recirculated into the system and supplemented, as needed, with more oxygen from a tank. In this way, a rebreather can provide dramatically longer dive times with a much smaller and less cumbersome apparatus. In addition, because air isn’t discharged into the water when you exhale, there are no bubbles (or at least very few). As a result, a diver wearing a rebreather can swim almost silently and invisibly—handy if you’re photographing bashful fish or, you know, sneaking up on the enemy spy who’s trying to sabotage your submarine.

Conventional scuba apparatus is “open-loop” (or “open-circuit”), meaning the air goes out of the system when it’s been used. Most rebreathers, by contrast, fall into one of three major categories:

As great as rebreathers are for certain applications, they have some disadvantages compared to conventional scuba gear. For one thing, because rebreathers are so complex, more things can (and do) go wrong. They must be carefully maintained—and even then, they are far more prone to failure than a simple tank-and-regulator setup. (Failure of one’s breathing apparatus deep underwater, of course, is a rather serious problem.) In addition, it’s surprisingly difficult to regulate oxygen pressure precisely so that it falls into the narrow range between too little (which can result in a potentially deadly condition known as hypoxia) and too much (which can result in the potentially deadly condition of oxygen toxicity). If a rebreather fails to deliver just the right mix of gases, the diver is in trouble.

And of course there’s the price, which is not a big deal for the military, but problematic for many recreational divers. Note to self: Put “become fabulously wealthy” higher on Life’s To Do List than “learn to use a rebreather.”

Note: This is an updated version of an article that originally appeared on Interesting Thing of the Day on February 17, 2005.