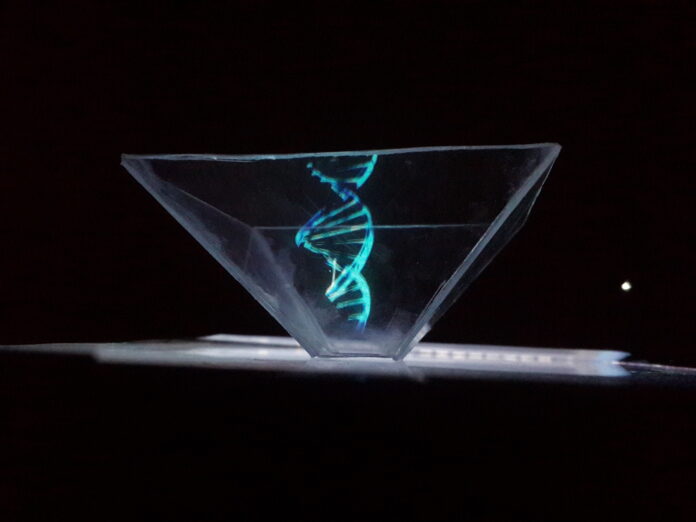 I’ve always fancied myself an amateur theoretical physicist, so I’m a sucker for any book that claims to explain the mysteries of the universe in laymen’s terms. Such was the case with a book I read in the early 1990s called The Holographic Universe, which promised “a remarkable new theory of reality.” The book was not written by a scientist and therefore turned out to be rather light on scientific detail. But it was the first of several books I read about an intriguing theory known as the “holographic paradigm.”

To set the stage, let’s turn back the calendar to the mid-1970s. In science, quantum physics was the hot area of research. Eastern religions, meanwhile, were moving into the mainstream in North America, and the New Age movement was in full swing. It was only a matter of time before science and mysticism converged. Books such as The Tao of Physics by Fritjof Capra in 1975 and Gary Zukav’s The Dancing Wu Li Masters in 1979 pointed out startling parallels between recent discoveries in quantum physics and ancient beliefs of Taoism, Buddhism, and Hinduism. Serious scientists were beginning to sound like mystics, and mystics were starting to talk about subatomic particles. The “new physics” seemed poised to bridge the world of faith with the world of science, through a common belief in a fundamentally interconnected universe.

One of the most interesting notions to emerge from this shiny happy alliance was a particular model of the universe that seemed to explain not only puzzling scientific phenomena but psychic experiences as well. The holographic paradigm was so named because its central metaphor is that of the hologram—or, to be more specific, a certain very unusual feature of holograms.

The Magic of Holograms

The basic process for creating a conventional hologram involves the use of a laser and a beam splitter, an optical device that sends half the light in each of two directions. One of the beams illuminates the object you’re recording, and the light reflected from the object collides with the second beam. When these two beams meet, the effect is much like what you’d see if you tossed a pebble into a pond and then, as the ripples were still spreading, tossed in another pebble. The pattern formed where the two sets of waves meet is called an interference pattern, and that is what is recorded on film when a hologram is made. Today it’s common to see reflective holograms that can be viewed under ordinary light (not to mention self-illuminated holographic displays of various types). Originally, however, holograms could be viewed only by exposing the film to the same type of laser light used to create it. If you were to look at the film with the naked eye, all you’d see would be patterns of ripples; shine the right kind of light onto it, though, and the image emerges in all its three-dimensional glory.

This type of hologram has another curious property. If you cut the film in half and then expose just one piece to the laser light, you’ll still see the entire image. In fact, you can keep making smaller and smaller pieces, and each one will still display the whole image rather than just part of the image, though the clarity degrades as the pieces get smaller. This “whole-in-each-of-the-parts” quality of holograms provided the crucial insight for Karl Pribram, a neurophysicist at Stanford University, and David Bohm, a physicist at the University of London. Each was trying to solve a different type of problem, and the hologram suggested just the answer they were looking for.

Pribram was studying the way memories are stored in the brain. Until the second half of the 20th century, conventional wisdom held that memories were localized—stored in a specific group of neurons. But experimental research showed otherwise. Rats were taught to run a maze, then had portions of their brains surgically removed. No matter which part of the brain was removed, the rats still remembered how to run the maze. Likewise, humans with brain injuries or who had portions of their brain removed for medical reasons never lost memories selectively (as in forgetting half of a story), though overall memory sometimes became hazier. This reminded Pribram of the way holograms work, and he began to suspect that the brain stores memories in a way analogous to holography: by recording diffuse patterns of electrical waves.

Meanwhile, David Bohm, who was famous for his work in quantum physics, was taking the metaphor of the hologram in a different direction. He was trying to make sense of the behavior of subatomic particles, which have annoying tendencies to appear and disappear spontaneously, to resist measurement, and to manifest sometimes as particles, sometimes as waves. His idea—arrived at after many years of thought and research—was that the universe itself is something like a hologram. What we perceive as reality is essentially an illusion, like the three-dimensional image of a hologram. “Real” reality, meanwhile, is analogous to the film—a vast pattern of intersecting vibrations in which each part in some way contains the whole. Bohm called the world of sensory experience the “explicate order” and its underlying reality the “implicate order.” According to his theory, the universe is a dynamic series of movements—folding into, and unfolding out of, the implicate order. Bohm coined the term “holomovement” to describe the universe in this way, as “hologram” implies a static image.

When Pribram found out about Bohm’s work he was very excited, and these new insights led him to generalize his theory even further. If the whole universe were a holomovement, with every part containing the whole, perhaps our brains actually construct reality as we go along. To put it differently, maybe everything we perceive as real may be nothing more or less than an unfolding of an underlying essence in the implicate order. It is as though only the patterns of vibrations are ultimately real, with all of time and space equally present everywhere in the fabric of the universe.

Implications of the Implicate

Psychics and New Age types were quick to latch onto this notion. The holographic model, taken to its logical conclusion, could potentially explain a wide range of phenomena such as precognition, telepathy, poltergeists, lucid dreaming, and near-death experiences, to say nothing of religious and mystical experiences. The theory is that our brains habitually unfold the implicate order in predictable ways, but as we can change the frequency or angle of a laser beam, perhaps we can experience other places, times, and knowledge—all equally present everywhere in the holomovement—given the right circumstances. This was the major thrust of The Holographic Universe. Author Michael Talbot took the holographic model well beyond what Pribram and Bohm outlined to explain a vast array of paranormal phenomena.

Philosopher Ken Wilber, who edited the book The Holographic Paradigm, takes a contrarian view of the model’s viability. He thinks it’s worthwhile in a limited sense, but considers it a grave mistake to apply the model too broadly, or to read too much into it. He resists, for example, attempts to equate the implicate order with God or Brahman. And he worries about trying to understand something transcendent (or transmental) in mental terms. If you want to have a transcendent experience, he says, that requires the long, hard work of spiritual transformation—not simply learning to picture the world differently.

The holographic paradigm—and, for that matter, the entire movement to integrate physics and mysticism—has lost a lot of steam since its heyday. Karl Pribram’s theories never found widespread acceptance; David Bohm died in 1992 without convincing many physicists of his views; and most of the prominent advocates of the model have moved on to other interests. It’s not necessarily that the theory is any less interesting or plausible than it ever was, but there’s just not a whole lot one can do with the notion. Supposing the universe really were something like a hologram, what would that mean in a practical sense? And how could it ever be proved or disproved? It is certainly fascinating to ponder a unified theory that explains the mysteries of physics, time, space, consciousness, and mysticism. But just as you can’t build muscles by studying exercise, you probably won’t master the workings of the implicate order by reading about it.

Note: This is an updated version of an article that originally appeared on Interesting Thing of the Day on May 13, 2003, and again in a slightly revised form on June 26, 2004.