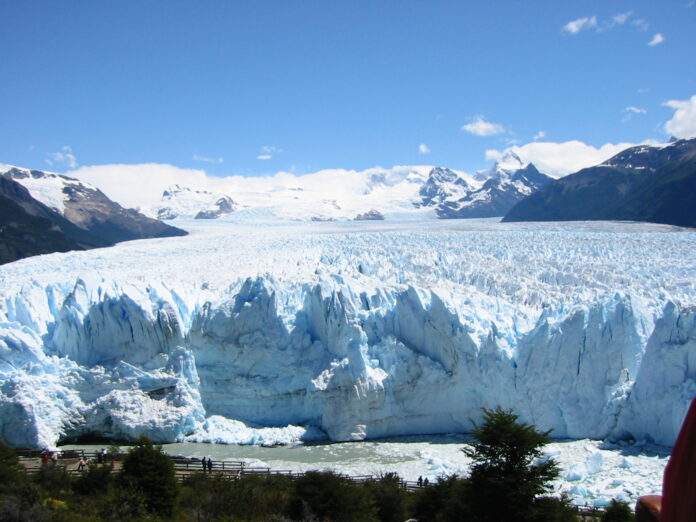 When I travel, I usually make a conscious effort to avoid having specific expectations. I plan out an itinerary, but I try to maintain a sense of equanimity about the experiences ahead. I like to be surprised—and I like to be able to experience new things in my own way, on my own terms. This sort of attitude has not only saved me some disappointment, it’s also helped me to approach fairly commonplace sights and events with a sense of wonder and delight. As a result—and frankly, without much effort—I found myself feeling neutral, perhaps even a bit blasé, about the prospect of visiting a glacier in Patagonia when we went there back in 2004. I’ve seen ice; what could this be other than a great quantity of it? I expected to be cold, so I packed appropriate clothing. I expected scenic vistas, so I packed my camera. And that was about as far as I thought about it.

The trip to the Perito Moreno glacier took us more than an hour by bus from the town of El Calafate, Argentina. When we rounded a corner on a mountain road and I got my first glimpse of the glacier, I thought, “Wow. That’s really big.” Later, from a much different angle, I realized what a tiny slice of one corner of one end of this glacier I’d seen earlier, and I was overwhelmed at the scale of what I was seeing. As glaciers go, I am told, this is not even one of the larger ones. Yowza. Even though I took dozens of pictures, including some panoramic shots, there is simply no way to capture how big this thing looks in person. No wide-angle lens could do it justice, because it’s not only impossibly wide but tall and long as well. Short of climbing a mountain or flying high overhead, you can’t take in the whole thing at once. So, yes: a lot of ice…but that doesn’t begin to tell the story.

We took a boat across the lake into which the glacier drains, then hiked along the shore to a point near the face of the glacier. There, we were outfitted with crampons for a 90-minute hike on the glacier itself. After about five minutes of climbing on the steep ice, our guides mentioned that it would become much more strenuous from here on, and two members of our group decided to turn back. The rest of us got a good workout, some extraordinary views, and a few surprises.

Like all glaciers, this one begins high in the mountains—in this case, the Andes, which separate Argentina from Chile. At the source, snowfall is nearly constant, and the weight of all this snow compresses the lower layers into virtually solid ice. As the snowfall continues, gravity pushes the thick mass of ice outward—downhill in this case. So a glacier is basically the same as a river, except that the water is frozen. This river moves quite slowly—about one meter per day—from its source roughly 30km (19 miles) away. As it descends, it encounters higher air temperatures and begins to melt. Some glaciers melt into the ocean; this one melts into a lake. The end of the glacier is a sheer wall of ice about 5km (3 miles) long and standing 60m (200 feet) above the water’s surface. When pieces fall off—a process known as calving—they make a tremendous roar and splash.

The Perito Moreno glacier also has several unique features. For one thing, it is, at the moment (according to some experts, at least) the only glacier in the world in a state of equilibrium—neither advancing nor retreating. Retreating is the norm, due to global warming—numerous glaciers have disappeared in recent decades, and many others are shrinking rapidly. The Perito Moreno glacier, however, advances at the same rate ice breaks off, and has done so for many years.

Another unusual characteristic is that this glacier empties into a lake right at the point where two branches connect through a fairly narrow channel. From time to time, the glacier’s face reaches all the way to the outcropping of land on the other side of the channel—sealing it off to create, in effect, two separate lakes. As the glacier continues to melt, the water level in one of the lakes rises at a faster rate than the other, causing significant flooding. Eventually, the warm water melts enough of the ice that an underwater tunnel forms between the lakes; as the tunnel expands, the water levels equalize. Before long, the tunnel becomes more of an underpass for a giant ice bridge; when this inevitably collapses, it’s a spectacular sight. (The last such collapse occurred on March 13, 2018, and the previous several were in 2016, 2012, 2008, 2006, and 2004.) The glacier then advances to block the channel again, and when we visited in December 2004, a small tunnel had recently formed and the water from the higher lake was still rushing into the lower one.

Hiking on a glacier is like hiking on a giant snow cone—the surface is rough, and gloves are mandatory, as you could seriously lacerate your hand if you fell. Although we were not hiking close to the face of the glacier, our guides were careful to point out that the structure was not reliably stable. We had to steer clear of numerous fissures and holes, some of them filled with water and shining with a beautiful but eerie blue glow. We noticed a thin layer of dark sediment on the ice; the guide said this was sand and dust carried by the wind, and that the water itself was the purest you’d find anywhere. This made sense; after all, the ice came from snow that fell many years ago and would not have contained any airborne pollutants—and the ice would have been an inhospitable environment for most microorganisms. “You can drink it,” the guide said. We exchanged puzzled looks at the notion that we could actually drink the glacier on which we were currently standing. I took off my gloves and tried a few sips—incredibly delicious. They should bottle this stuff, eh? Then I noticed that the picture on the bottle of water in my hand looked suspiciously like the mountains directly in front of us. Ah.

Just before we went around the last wall of ice on our way off the glacier, the guide said there was a special treat waiting for us. They’d set up a little table on the ice with complimentary glasses of Scotch for everyone—on the rocks, of course. Yes, those rocks. We didn’t even mind the blatant product placement—it was a delightful treat. We left tired, sweaty, sunburned, and satisfied. And to think: all I had been expecting was a lot of ice!

Note: This is an updated version of an article that originally appeared on Interesting Thing of the Day on February 21, 2005.