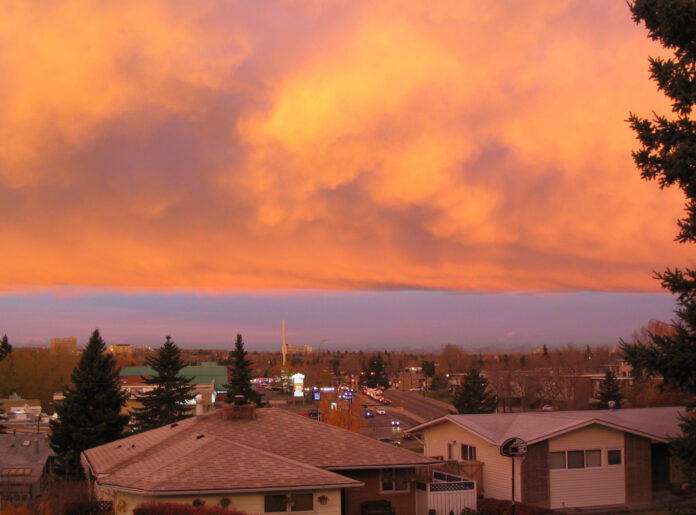 For those who live in wintry climates, it can sometimes seem like spring will never arrive. Around the beginning of March in the upper Northern Hemisphere there is a palpable restlessness, an eagerness to shed winter clothing and begin planting spring gardens. At the northern latitude in which I grew up, winter would often linger into April, if not longer, and the sight of snow, which once seemed so novel in the fall, became unbearable.

Amongst these wintry places, however, there are regions where spring can arrive suddenly in the middle of January, but retreat just as suddenly. One such region, an area encompassing the southern half of the Canadian province of Alberta, along with parts of Montana and the Dakotas, is subject to a unique meteorological process that can cause this type of extreme variation in temperature. Known as the Chinook wind, or simply chinooks, this phenomenon is responsible for record-breaking fluctuations of temperature and humidity, as well as bringing relief to a winter-weary population.

Chinook of the North

Named for the Chinookan people of Oregon and Washington, where the wind was believed to originate, there are actually two species of chinooks. The term is used to describe both a warm, wet southwesterly wind that blows into Puget Sound and the coastal areas of British Columbia, and also the dry, warm wind that crosses the Rockies into Alberta and the northern states. In actuality, it is the same wind, but with very different effects. Chinooks in the west (usually pronounced “chin-ook”) bring heavy precipitation into coastal areas, and then move over the mountains, losing moisture as they go, before descending to the plains as the warm, dry Chinook (“shin-ook”).

This transformation takes place when the moisture-laden wind, driven up the western slopes of the Rockies, cools and expands, releasing water vapor as rain or snow. This drier wind then flows down the eastern side of the range, gaining heat as it loses elevation at a greater rate than it would have with the extra moisture. This phenomenon, called a Föhn wind, occurs in other parts of the world where wind moves over mountain ranges, such as in the Alps, the Pyrenees, and the Andes.

Blowin’ in the Wind

The effects of the eastern chinooks can be truly startling, as in the case of a chinook that blew into Loma, Montana, on January 15, 1972. The temperature in Loma before the wind arrived was –54°F (–48°C), and eventually rose to 49°F (9°C), a change of 103°F (57°C), making it the most extreme change in temperature ever recorded in a 24-hour period. Another record-setting chinook, this time affecting the Black Hills city of Spearfish, South Dakota on January 22, 1943, raised the local temperature 49° F (27° C) in two minutes (from –4°F/–20°C to 45°F/7°C), the fastest rise ever recorded. The city of Calgary, Alberta has also seen record-breaking changes in temperature and humidity caused by chinooks, and experiences chinook-influenced weather for about 30 to 35 days every year.

Besides creating warmer weather (and often leading to rapid snow melt), chinooks have other effects that are not so welcome. The swift change in temperature and moisture can wreak havoc with soil conditions and the health of trees, plants, livestock, and humans. Some people report increased headaches, anxiety, and irritability when chinooks arrive, although there are many whose moods are elevated by the unseasonably warm weather. Unfortunately, this respite is usually only temporary, and winter conditions can set in once again, leaving locals to resume their restless pining for spring.

Note: This is an updated version of an article that originally appeared on Interesting Thing of the Day on March 7, 2007.