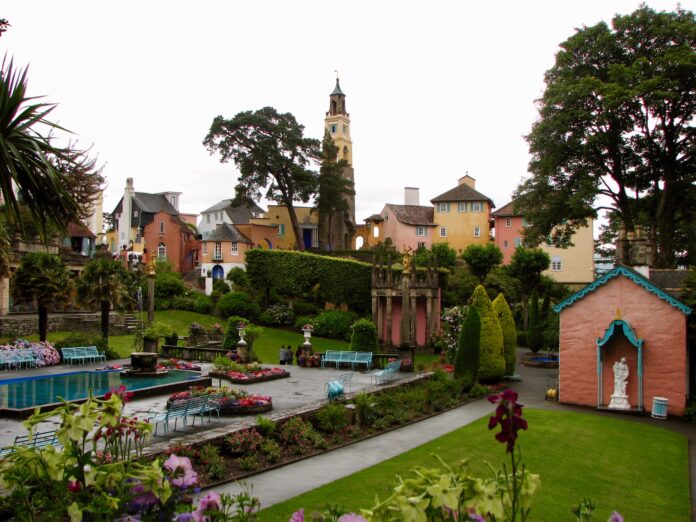 World-famous architects like Frank Gehry, Renzo Piano, and Rem Koolhaas often make headlines for their daring and creative buildings, but the vast majority of architects spend their time on more down-to-earth projects, like schools and fire houses. Their work is dictated by the needs of their clients, and their creativity is in service to solving any problems these needs might entail. But what happens when architects are given free rein? What do architects do for fun?

It is easy to imagine that Julia Morgan, the architect who designed Hearst Castle, enjoyed creating that fantastical world to Hearst’s specifications, or that Eduard Riedel, the architect of King Ludwig II of Bavaria’s Neuschwanstein Castle, found some pleasure in recreating a medieval castle in the 19th century. But these architects were still limited by the wishes and whims of their employers, unable to express themselves fully.

In comparison, the English-born Welsh architect Sir Clough Williams-Ellis (1883–1978) found a way to realize his dearest architectural dreams on his own terms. After purchasing a particularly beautiful piece of property on the northern Welsh coast in 1925, Clough set out to create a wonderland of architectural whimsy that he called Portmeirion (after the coastal setting and the Welsh name of the local county, Merioneth). The result of Clough’s work is a colorful Italianate village of cottages, towers, fountains, and cobbled streets that has drawn comparisons to the medieval hill towns of Tuscany and the world-renowned Italian coastal town of Portofino.

It Takes a Village

When Clough bought the Portmeirion site in 1925, his vision was not simply to construct individual buildings, but to create an entire town. As The Architects Journal noted of the project in 1926, the “results of his [Clough’s] scheme will be significant and should do much to shake the current notion that although houses must be designed with due care, towns may grow up by chance.” Over the next 50 years, this vision of Portmeirion began to take shape under Clough’s leadership, with construction occurring in two phases: from 1925 to 1939, and from 1954 to 1976.

Another part of Clough’s vision for Portmeirion was that it help to prove that beautiful natural spaces could be developed for commercial use without ruining their beauty, what he referred to as “that strange necessity.” His choice of this particular site, a peninsula in the Snowdonia region of Wales, was no accident. He wanted to draw visitors to the area, and the balmy microclimate and coastal views of Portmeirion proved attractive even when the town had not been fully developed. In fact, early on Clough raised money for the construction costs by operating a hotel out of an existing building.

In this respect, it could be argued that Clough was a forerunner to the modern pursuit of sustainable development, the attempt to provide economic benefit while preserving natural resources. Clough cared deeply about environmental protection; he not only served on various councils related to this goal, but was also a strong advocate for the creation of national parks in England and Wales, most especially for Snowdonia National Park in Wales.

Clough’s architectural credo, “Cherish the Past, Adorn the Present, Construct for the Future,” is in keeping with his passion for sustainability. At Portmeirion, Clough honored the past by salvaging old structures from demolition sites, relocating and renovating them to become part of what he called his “home for fallen buildings.” The vivid colors and enchanting streets of the town show Clough’s obvious love for “adorning the present,” while his larger vision of preserving the environment by pursuing limited economic development gives meaning to “constructing for the future.”

Portmeirion has become a prime tourist destination for visitors to North Wales; visitors can see the town during the day, or may opt to stay the night in the main hotel, in serviced rooms located in the village, in self-catering individual cottages, or at the Castell Deudraeth, a Victorian castellated mansion on the estate. Tourists are drawn by the town’s legendary beauty, but it does have another claim to fame.

In 1966, Portmeirion was the setting for the filming of the British TV show The Prisoner, starring the popular stage and screen actor Patrick McGoohan. Although the show ran for only 17 episodes in 1967 and 1968, it became an enormous hit, and fans continue to be interested in every aspect of its production, including where it was filmed. As part of this interest, the official fan club of The Prisoner, Six of One, holds a convention in Portmeirion every year.

In these and other ways, the popularity of the town Sir Clough Williams-Ellis built lives on, over 40 years after his death. Although he may have created Portmeirion to satisfy his own architectural visions, he succeeded in bringing these dreams to life for the benefit of countless others.

Note: This is an updated version of an article that originally appeared on Interesting Thing of the Day on December 15, 2006.