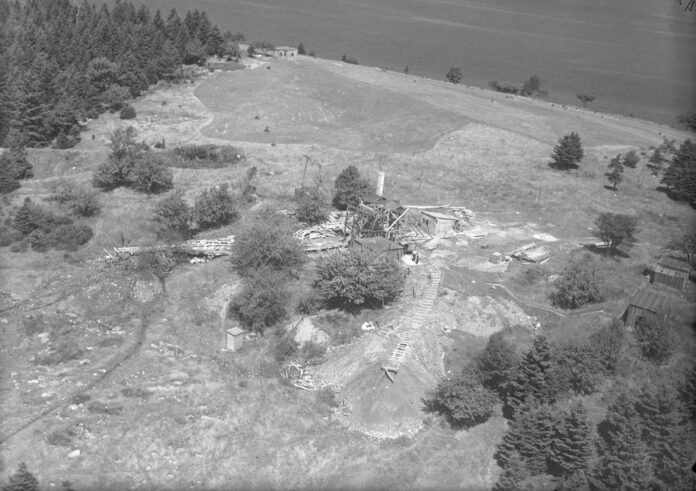 Canada’s maritime provinces may not be the first place you think of when you hear the words “buried treasure,” but for over 200 years, treasure hunters have had their eyes on tiny Oak Island in Mahone Bay, Nova Scotia. Over the years, millions of dollars have been spent—and at least six lives lost—in repeated attempts to excavate one of the world’s most infamous alleged treasure sites. What could be worth so much effort? Possibly an enormous cache of gold and silver, ancient manuscripts, or…nothing at all.

Can You Dig It?

The story begins in 1795, when a boy was wandering around on the island and found a curious depression in the ground. Right above this depression was an old tackle block hanging from the limb of a large oak tree, as though someone had used it to lower something heavy into a hole. Having heard stories about pirates frequenting the area in centuries past, the boy immediately suspected buried treasure. He returned the following day with two friends and began digging. A few feet down, the boys found a layer of flagstones; 10 feet below that was a wooden platform. Both of these markers strongly suggested the hole was man-made. They kept going, but by the time they reached 30 feet, they realized there was no end in sight and called it quits.

Several years later, having secured some financing and additional help, they returned, this time digging to more than 90 feet—hitting several additional wooden platforms on the way down. At 90 feet they found a stone inscribed with strange symbols they could not decipher. (Later, some would claim that the symbols were a cipher for “Forty feet below two million pounds are buried,” but that stone was soon, conveniently, lost.) Just below that was a layer of mud. Probing down into the mud with a crowbar, they hit another solid surface—perhaps another wooden platform, or perhaps a treasure vault. But when they returned the next day, the shaft had filled with 60 feet of water, which foiled all attempts at bailing. Shortly thereafter, they tried to dig a parallel shaft, thinking they’d get below the treasure and tunnel in horizontally—but this second shaft filled with water as well. The first crew of treasure hunters abandoned their dig.

In 1849, a second group attempted an excavation. Then another, and another, and another. Each time, treasure hunters made some intriguing discovery, but each time, their attempts to go deeper were frustrated—by flooding, cave-ins, accidental deaths, and other misfortunes. On several occasions, workers attempted to drill into the earth beneath the water that filled the pit, and the drills brought up some interesting fragments—a piece of gold chain here, some wood there…and a small scrap of parchment that had one or two letters written on it. The evidence suggested that below more layers of earth and wood was an empty space—a vault containing chests, perhaps with gold coins inside. But these were just educated guesses, because no one could actually get down to them. Some attempts to widen or deepen the hole—or to get at the treasure indirectly through other holes—caused whatever the drill bits had hit to sink even farther down. The diggers eventually realized that the flooding was due to two or more horizontal tunnels that ran to the shore, and had seemingly been dug as booby traps. Unfortunately, repeated attempts to block those tunnels also failed. By the early 20th century, so many large holes had been created that the original location of the so-called money pit was no longer certain.

Excavations using modern equipment in the 1930s enlarged the main hole greatly, but still nothing of value was found. In the decades since, various groups have made additional attempts to unearth the treasure, digging ever larger and deeper holes, and although more intriguing objects have been uncovered, there’s still no definitive proof that there is, or was, a treasure there. Following years of legal disputes about the ownership of the land and the rights to any treasure that may be buried there, agreements were finally reached among various parties with a financial stake in the site and the provincial government. Excavation work is ongoing, and has been documented on the History Channel’s series The Curse of Oak Island since 2014.

Getting to the Bottom of It

Over the centuries, dozens of theories have been advanced as to what the Oak Island treasure really is. One popular theory holds that it’s Captain Kidd’s fortune—or that of some other pirate. Another says it’s the lost treasure of the Knights Templar. Some say (based apparently on that one tiny piece of parchment) that it’s Shakespeare’s original manuscripts. Others say it must be the Holy Grail. Although proponents of each of these theories make persuasive arguments as to why they must be correct, a recurring theme is that any treasure hidden so carefully and protected so elaborately as to defy two centuries’ worth of determined treasure hunters must be unfathomably important.

Except that it apparently wasn’t important enough for whoever hid it to come back for it—or pass on information of its whereabouts to anyone else.

And that assumes there’s something hidden there in the first place. There might not be. There is some evidence to suggest that the original “pit,” as well as the tunnels that fed water into it, were actually natural formations, and that the wooden “platforms” found at various points were nothing more than dead trees that had fallen into a hole once upon a time. What of the tackle block? And the gold chain? And the parchment? And the stone with the mysterious message? Well, all these artifacts have disappeared, and even if someone produced them, it would be impossible to prove they came from the pit. They could have been planted; they could also have been imagined. At no point in the last 200 years was work on the site controlled or documented carefully as an archeological dig would have been. All we truly have are the reports of people who wanted desperately to believe they were about to find a fabulous treasure.

Perhaps some day, when the best technology has been brought to bear on the problem (or there’s nothing left of the island but a gigantic hole), the Oak Island Mystery will be resolved once and for all. But we may ultimately find that the only real money on Oak Island came from a TV show.

Note: This is an updated version of an article that originally appeared on Interesting Thing of the Day on March 23, 2005.