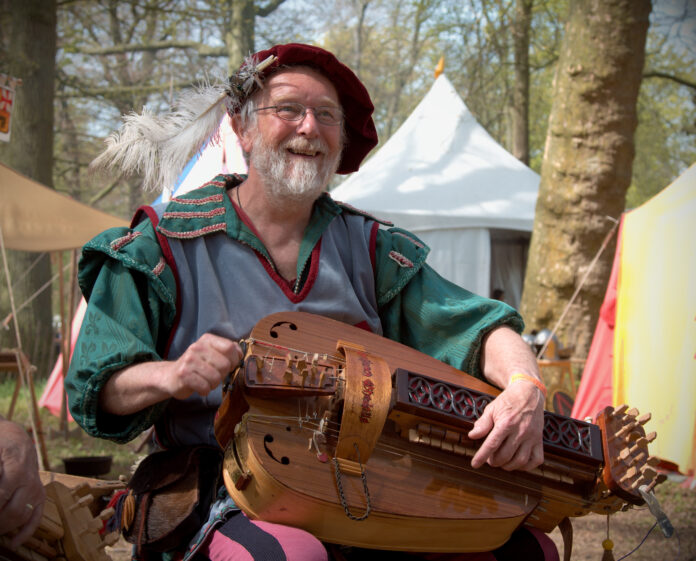 In 1996, I bought an album I knew next to nothing about, by an artist I had never heard of before, on the strength of the album being issued on Peter Gabriel’s excellent Real World record label. The album was Big City Secrets by Joseph Arthur, and from the very first track I knew that I had made a good purchase. However, I really sat up and listened when I got to track 3, “Mikel K.” In the background of the song there was a really odd-sounding instrument. It sounded a bit like a violin (or a folk-style fiddle) played with a never-ending bow, and had a bagpipe-like drone note in the background. As if that wasn’t enough sonic complexity for one instrument, there was also a rhythmic buzzing sound, slightly reminiscent of a kazoo. What in the world was it? A quick check of the liner notes revealed only one instrument that I hadn’t heard of before—a hurdy-gurdy.

Don’t They Usually Come with a Monkey?

The first image that popped into my head was of a kind of barrel organ, where a handle is turned to drive bellows which force air through organ pipes, and which is also usually accompanied by some kind of simian assistant. I was so fascinated by the sound that I did some research, and found that my misconception was a common one. The hurdy-gurdy (or vielle à roue, as it is known in France) is played by turning a handle, but the resemblance to a barrel organ ends there. The body of the instrument can be box-shaped or with a rounded back like a lute, and many examples are beautifully decorated with inlaid wood. The handle turns a wheel covered in rosin, which vibrates the strings; the hurdy-gurdy functions like a violin with an endless bow, so that there is no pause in the sound at the end of a bow stroke. Instead of sounding notes using the fingers, the musician presses sliding, un-sprung keys which make contact with the strings and shorten them to make a sound of the required pitch. The drone comes from one or more strings which do not get pressed by the keys, and therefore sound the same notes continuously. The final part of the puzzle is the moveable bridge, or chien (French for dog), which supports one of the drone strings and can be manipulated by a skilled player so that it vibrates against the body of the hurdy-gurdy during playing, making a rhythmic buzzing noise. The whole ensemble has a driving, continuous sound, with its own percussion produced by the chien; it is impossible not to tap your feet along with the music.

The Golden Age of the Hurdy-Gurdy

It should therefore come as no surprise that the heyday of the hurdy-gurdy was in the medieval period, when it was used to accompany dancing. However, between the 14th and 16th centuries, the complexity and range of the popular music of the day increased beyond the capabilities of the instrument, and it fell out of favour with professional musicians, while remaining a firm favourite in rural areas with folk musicians. There was a bit of a hurdy-gurdy revival in the 17th to 18th centuries, as the instrument was improved and much new music was written for it. Oddly, this was partly due to its former association with the rural peasantry. The French court of Louis XIV started a fashion for what might be called “peasant chic”: the King was fascinated by his own idea of the simple, rural life (of course, this was a somewhat rose-tinted view, ignoring all the harsh, unsanitary, and downright unpleasant aspects of peasant life), and the hurdy-gurdy fitted in with this fashion perfectly. Eventually, the fashion changed, and by the French Revolution, the hurdy-gurdy had been returned to the rural working people. Today the peculiar sound of the instrument has a great affinity for all kinds of modern music, as I discovered. It makes an interesting acoustic counterpoint to largely electronic music, and the Celtic/Middle-Eastern feel of the sound complements world and folk music equally well. In my opinion, there are few pieces of music that aren’t improved by the addition of a hurdy-gurdy—but perhaps I’m a bit biased.

The Sad and Seedy Side

The hurdy-gurdy also has a dark side to its history, which can be traced back to Hessen, Germany in the 1800s. Poverty was rife in rural areas because of increasing family sizes and the division of inherited land, so farmers started to make brooms and fly whisks in the winter which they then sold in the summer as pedlars. Initially, they sold their goods locally, but their trade soon spread to other areas of Europe, and as far as Britain and Russia. Being shrewd folk, they realised that brooms are not the most fascinating of household commodities, and that they would gather more of a crowd of potential purchasers if some form of entertainment was included. This took the form of pretty young “hurdy-gurdy girls” who danced and played music. Inevitably, the girls became more of a draw than the brooms, and before long, young girls were being persuaded by “soul-merchants” to leave their homes and families to play and dance in seedy music halls for sailors, miners, and other groups of men bereft of female company. The girls performed as far afield as gold-rush California, Cuba, and Australia. Some were drawn into prostitution, and while a lucky few became rich from their trade, most led miserable lives and returned home poor and ill. For many years, the trade was a public secret, with officials turning a blind eye (or even profiting from it) but eventually it changed from public secret to public scandal, and was finally outlawed in 1865 by a government edict.

So who is the Jimi Hendrix of the hurdy-gurdy scene? My vote would go to Nigel Eaton. His father, Chris, also makes the instruments, which must be handy if he has a Pete Townsend moment at a gig, and smashes up his hurdy-gurdy. Nigel has formed numerous groups centered around the hurdy-gurdy, including Blowzabella and Ancient Beatbox, as well as playing as a session musician with performers as diverse as Led Zeppelin and Joseph Arthur. In fact, this is where I came in—Nigel Eaton was playing on the Joseph Arthur track I mentioned at the start of this article. Like the rosined wheel of the hurdy-gurdy, I have come full circle.

Note: This is an updated version of an article that originally appeared on Interesting Thing of the Day on July 1, 2003, and again in a slightly revised form on September 22, 2004.