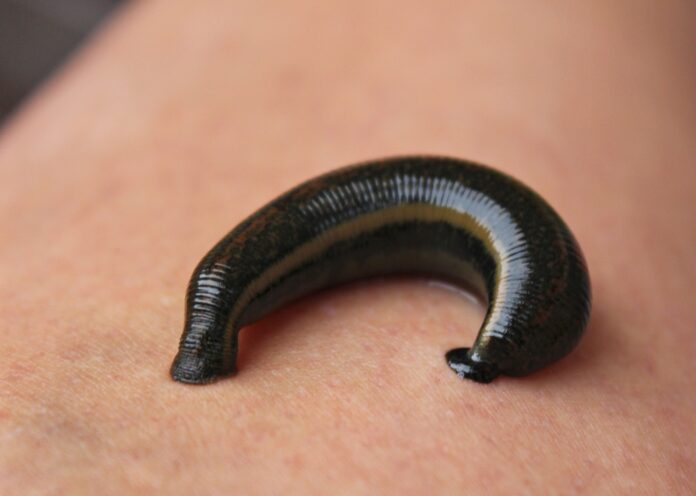 I’m not particularly squeamish at the sight of blood. Needles, on the other hand—or, let’s say, any sharp objects that could be used, intentionally or otherwise, to put a hole in my skin—give me the creeps. I can deal with injections and blood tests and so on as long as I don’t have to watch, but that sensation of having something poking under my skin…well, it gets under my skin. I’m also not crazy about slimy or wriggly things—food, plant, animal, or otherwise. (This was not always the case. When I was very young I loved to play with earthworms. Once I accidentally, uh, broke one, and I was terribly upset. I took the pieces to a neighbor who was a nurse and insisted that she put the worm back together with a band-aid. She did. Poor woman. Poor worm.) Thus it should come as no surprise that leeches—by virtue of being slimy, wriggly, and putting holes in the skin—are pretty high on my “icky” list.

I cringe when I read old stories about bloodletting and other medical practices that, by today’s standards, would be considered insane. Although doctors of centuries past surely felt their logic was sound, they were working from incorrect assumptions, and such tactics caused untold suffering. Stories of the medicinal use of leeches, in particular, always disturbed me. It’s one thing to use a medical device to remove blood from someone’s body, but applying a blood-sucking creature just seemed hideously wrong. I’ve never heard of mosquitoes being put to therapeutic use, never heard of a surgeon suggesting that a shark might be handy for performing an amputation. So I’ve always been grateful to live in the age of sterile instruments, antibiotics, and other modern marvels.

But in recent years I’ve been seeing more and more articles about leeches being used, once again, in medicine. I saw live leeches on display at the Pharmacy Museum in New Orleans, and I’ve seen them used on numerous TV shows (both reality and fiction). After decades of living in disdain on the general public’s “icky” list, leeches are once again gaining respectability for their medical applications. Only this time it’s not bloodletting to cure a fever, a headache, or any other random ailment; it’s a precise medical procedure to solve some very specific problems.

Medicinal leeches (Hirudo medicinalis) have a sucker on each end with which they attach to a host. Their tiny mouths, located inside one of the suckers, have three jaws arranged in a Y shape—each with about 100 microscopic teeth. When these jaws bite into the flesh of a human or other animal, they create tiny, precise incisions that give the leech access to a steady supply of blood, which it then ingests. But just as interesting is the leech’s saliva, which contains among other things an anesthetic (making the bite virtually painless), a vasodilator (which expands the small blood vessels near the bite), an anti-clotting agent (which can cause the wound to keep bleeding for many hours after the leech is removed), and even antibiotic agents to prevent infection. So as animals go, there are worse things to be bitten by. Leeches suck in up to 10 times their body weight in blood—about 15–20 grams, or 3–4 teaspoons—and then drop off. A feeding lasts about 30 minutes to an hour, after which the leech doesn’t need to eat again for six months.

The modern medical application involves procedures such as skin grafts, reattachment of body parts, and reconstructive surgery in which blood flow must be directed to a new piece of skin. Getting blood to a piece of tissue is relatively easy, but siphoning the used blood away from the tissue is trickier. As a result, blood sometimes pools under the skin where it has just the opposite of the desired effect—it prevents oxygen from reaching the tissue. In such cases, what the patient needs is a minuscule incision, constant negative pressure to draw the excess blood out, a way to expand the blood vessels for maximum blood flow, and a way to prevent the opening from clotting until proper circulation has been established. This turns out to be a perfect match for the leech’s résumé; it can accomplish all this much more efficiently, precisely, and safely than using conventional medical equipment. As a matter of fact, the U.S. Food and Drug Administration has formally classified medicinal leeches as medical devices. Now they are being used daily, by the thousands, in well-equipped hospitals all over the world.

Like used syringes, “used” leeches must be disposed of; reusing them on another patient could transmit diseases found in the first patient’s blood. I’ve heard that some are discarded along with used sharps (and then incinerated by a plasma arc waste disposal system), while others are disposed of by dunking them in ethyl alcohol or putting them in caustic soda. I have not heard whether such disposal methods raise the hackles of animal-rights groups. Medicinal leeches are, after all, considered a “near threatened” species in the wild. But as much as I like animals, I’d have trouble feeling sympathy for a euthanized leech, even if it did just save my skin.

Leeches are not the only slimy critters being put to medical use. Maggots, for example, are becoming a popular choice for debriding major wounds because they eat only dead flesh, leaving the healthy tissue intact. I’m all in favor of “natural” cures, and I’d like to think that if I ever experienced an injury for which leeches or maggots were an appropriate treatment, I’d have the grace and fortitude to suppress my “ick” reflex. All the same, the researchers working to create a mechanical substitute for medicinal leeches have my complete support.

Note: This is an updated version of an article that originally appeared on Interesting Thing of the Day on February 19. 2005.