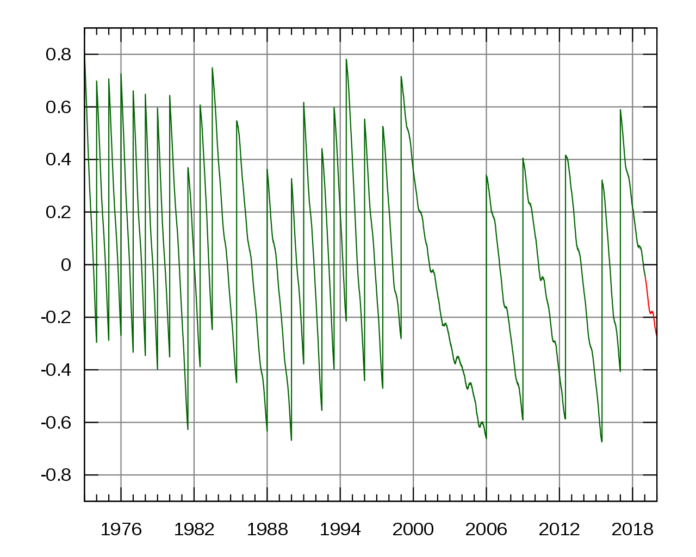 There’s no easy way to say this, so I’m just going to put it out there: the Earth rotates at the wrong speed. Or, rather, it usually does. You may think it takes 24 hours to go around once, but sometimes it takes about 2 milliseconds more. To be fair, the planet’s speed has been reasonably consistent for most of the past 20 years, but for many years prior to that, it was consistently behind. Scientists believe that in the future, it will revert to its old ways, and probably even get worse. Although 2 milliseconds a day doesn’t sound like much, it adds up to about a second every year and a half. Which means that, eventually, the world’s most accurate clocks get noticeably out of sync with the observed rotation of the planet. The solution, for several decades, has been to add “leap seconds” as necessary to our official time standards so that they match what the planet is doing—although this procedure has some problems of its own.

In a way, this is all a question of how you define words like “second” and “wrong.” When it comes to timekeeping, things are seldom as they appear.

For starters, how long is a second? Obviously, it’s 1/60 of a minute, which is 1/60 of an hour, which is in turn 1/24 of a day—in other words, a second is 1/86,400 of a day. Or is it? Well, it used to be. One can determine when exactly one day has elapsed by looking at the sky, but this means that all the smaller time segments could be known only after some division; they didn’t have any real meaning on their own. And the precise astronomical observations needed to determine just when a day has elapsed were rather inconvenient for most scientists, let alone the rest of us. More importantly, astronomers have known since the late 18th century that the speed of the Earth’s rotation is not constant—so calculating seconds, minutes, and hours strictly as fractions of a day means that each of those units could have a slightly different value every day.

However, the development of atomic clocks in the 1940s and 1950s changed all that. Atomic clocks work by counting the vibrations of certain atoms, which are invariant, theoretically, forever. So in 1967, the International System of Units (SI) defined the second as 9,192,631,770 vibrations of the Cesium-133 atom. Interestingly, they did not arrive at that figure by counting the number of vibrations in 1/86,400 of a day. Instead, they based it on something called ephemeris time, in which hours, minutes, and seconds are derived not from the rotation of the Earth, but from its revolution around the sun. That speed, too, varies; scientists chose the length of the ephemeris second in 1900 as their arbitrary standard. As later research revealed, the last time a day (by ordinary, solar reckoning) was exactly 86,400 SI seconds long was in 1820. So the length of a second, as measured by the Earth’s rotation, suddenly became “wrong” according to the new definition of second.

We did, however, finally have a nice, consistent standard that was readily measurable on its own terms without astronomical observations. But the Earth apparently didn’t get the message that it was supposed to conform to this new standard, and its rotation kept slowing, ever so slightly, with each passing year. In 1972, Coordinated Universal Time (which, for complicated reasons, goes by the initials UTC rather than CUT) was adopted as the new international standard, based on measurements from atomic clocks. (An aside: even atomic clocks don’t always agree with each other; the official universal standard is based on the average times from about 250 atomic clocks.) But astronomers still needed a timekeeping system that matched what they observed—irregularities and all.

To deal with the mismatch between UTC and astronomical time, the scientists charged with maintaining UTC decided that whenever that difference approached ±0.9 seconds, a “leap second” would be added to or subtracted from UTC as a correction—in other words, an occasional 61- or 59-second minute. Between 1972 and 1998, 22 such seconds were added. But then, for reasons that are not entirely clear, the planet decided to stick to an 86,400-second-a-day rotation for a while, and no leap seconds were needed from 1999 through 2004. From 2005 through 2018, only five leap seconds have been added—so, about one every three years on average. But historical data shows that the Earth has a habit of changing its rotational speed quite frequently, and the trend over many centuries has clearly been a gradual slowing. So most experts believe that the need for leap seconds will never entirely disappear.

On the other hand, quite a few people are fed up with the whole notion of leap seconds for reasons both philosophical and practical. For one thing, a lot of the world’s clocks and computer systems were not designed to handle leap seconds elegantly. This is not usually a big deal, but sometimes, the difference of a second means everything—in financial transactions, for example, where the prices of stock, currency, or whatnot can change instantly. More importantly, if the planet’s rotation continues to slow at its historical rate, leap seconds will eventually be needed more and more often. In as little as a few years, the increased disparity between UTC and other timekeeping standards could cause serious problems, including potential failure of the GPS system and other navigational tools. And on a much longer time scale—say, 50,000 years—the Earth’s rotation could take 86,401 SI seconds each day, meaning we’d need to add a leap second every single day, or else redefine “second” to support the facts.

So one proposal currently being considered by the world’s standards committees is simply to stick with UTC but abandon the use of leap seconds altogether. That sounds easy enough, but there are some drawbacks. Doing so would make astronomers’ work harder and require that they invest a lot of money in upgrading their equipment. As for the rest of us, we’d simply live with the small difference between astronomical time and atomic time until it accumulated to 60 minutes—at which point we would simply add a “leap hour,” just as most of us do once a year at the end of Daylight Saving Time. The first such hour wouldn’t happen for more than four centuries, at which point it would be someone else’s problem to worry about.

Until the world’s timekeeping experts get this all sorted out—which may be never—the International Earth Rotation and Reference Systems Service carefully measures the speed of the Earth’s rotation, issuing periodic bulletins as to whether we need to add another leap second at the end of the following June or December. If and when the next leap second occurs, you probably won’t notice. But many millennia in the future, your descendants may finally get 25-hour days.

Note: This is an updated version of an article that originally appeared on Interesting Thing of the Day on April 29, 2005.