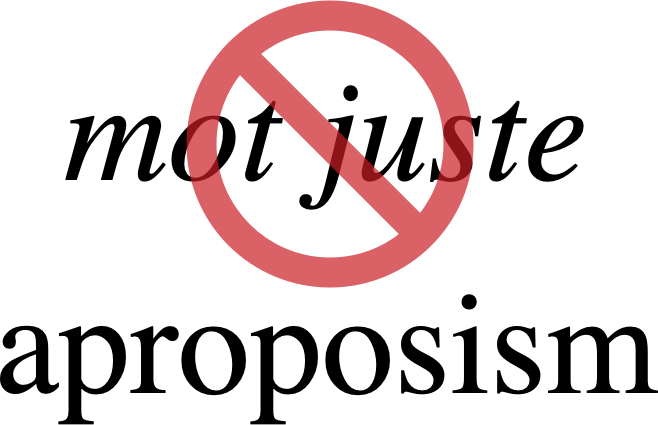 Don’t bother looking it up in the dictionary. The word aproposism isn’t there yet; I coined it back in 2003 and it has been used in the wild by (checks notes) approximately zero other people since then. But it had to be done. English is full of words that mean “the wrong word” in one sense or another: misnomer, malapropism, solecism, hyperbole, oxymoron, and so on, not to mention related concepts like misunderstanding, misconception, and misapprehension. This must show that English speakers value an apt choice of words and dislike an inappropriate choice. And yet, where is the word in English that refers to a choice of expression that’s just right? There isn’t one. Or wasn’t, until I came up with it.

There is, of course, the expression mot juste, which (per Merriam-Webster) does in fact mean “the exactly right word or phrasing.” Problem solved, right? Well, no. The phrase is French, and although it appears in many English dictionaries, it’s not terribly common—and it’s typically italicized (as I’ve done here) to denote that it’s a not-yet-fully-integrated foreign term. It’s also a two-word phrase, not a single word; and being French, it doesn’t follow the usual English pronunciation rules. In short: no, sorry, that won’t do at all. (For the sake of completeness, I’ll also mention another two-word French phrase you’ll find in your English dictionary: bon mot (“good word”), which refers to a clever remark or a witticism—but here, we’re not concerned with cleverness so much as appropriateness.) English ought to have a word that refers to a good choice of wording and that (whatever etymological roots it may have) at least sounds like the rest of the language.

The need for this word arose when I was researching some well-known misnomers and malapropisms. I noticed that, amusingly enough, sometimes malapropisms were mistakenly referred to as misnomers, and vice versa. A misnomer, by the way, is an inappropriate name for something or someone, whereas a malapropism is the (often humorous) misuse of a word due to its similarity in sound to another word. So, for example, you might say that “correctional facility” is a misnomer if you believe behavioral correction does not occur there; similarly, “atom” is a misnomer for a unit of matter that can in fact be subdivided further. But if you say “purposefully” when you mean “purposely” or “disinterested” when you mean “uninterested,” that is a malapropism.

One website I looked at referred to the misuse of “healthful” to mean “healthy” as a misnomer, but that’s incorrect. An adjective cannot be a misnomer. The usage in question was a malapropism, as was the use of the term “misnomer” in place of “malapropism”! (As long as I’m coining terms, I’ll call this particular blunder a recursive malapropism.)

In any case, good writers would naturally want to avoid such mistakes, but how does one refer succinctly to a felicitous word choice? If I want to say, “I’ve chosen the correct word to mean ‘the wrong word,’” what sort of an activity have I thus performed? Or how can I describe the word so chosen? In either case, the correct term can only be aproposism.

Careful readers may wonder why I didn’t use the shorter apropism, i.e., malapropism without the “mal-.” Three reasons: first, “apropism” is etymologically indefensible; second, aproposism is easier to remember because it contains “apropos” (appropriate); and third, aproposism is harder to pronounce—everyone likes a good tongue twister.

The reason “apropism” is etymologically indefensible is that the word “malapropism” itself has a rather dubious pedigree. The term was not derived directly from French, as you might suspect. Instead, it comes from the name of a character—Mrs. Malaprop—in Richard Brinsley Sheridan’s 1775 comedy The Rivals. Mrs. Malaprop’s lines were peppered with verbal blunders, and the name was supposed to be a joke for those who knew some French—a catchy shortening of “malapropos,” which means “inopportunely.” Malapropos, in turn, is a combination of mal (“bad”) + à (“to”) + propos (“purpose”). All that to say: the pos in aproposism serves to tie the word more directly into its French roots, rather than basing it on a comedic English corruption of a French term.

That said, here’s my official definition:

Note: This is an updated version of an article that originally appeared on Interesting Thing of the Day on October 29, 2003, and again in a slightly revised form on December 19, 2004.