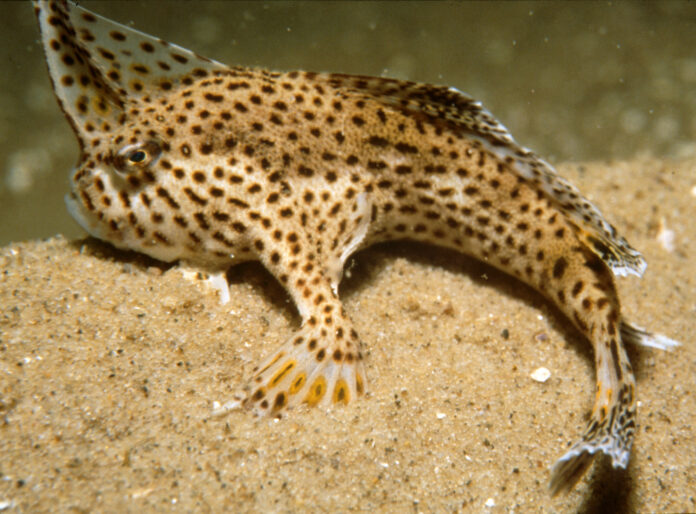 My earliest memory of fish was watching them swim around in an aquarium at the dentist’s office. They had been strategically placed so that patients could see them while undergoing dental procedures; presumably this was expected to have a calming or at least a distracting effect. However, my predominant memory of those dental visits was that of pain. I’m sure the dentist never imagined he was causing his young patients to associate pretty tropical fish with discomfort, but let’s just say I never developed much of an interest in fish—other than as food. But of course no subject is outside my curatorial domain these days, and I’m often quite surprised to learn about what I’ve been missing. For example: a fish that walks.

The spotted handfish (Brachionichthys hirsutus) is found only in a small region of the lower Derwent Estuary near the city of Hobart, in southeastern Tasmania. It’s a small, colorful, friendly-looking fish that lives in shallow waters. Adults grow to be no more than 15cm (about 6 inches) in length, and are covered with a distinctive pattern of dots that can identify individuals as uniquely as fingerprints. But what makes this fish truly unique is its pectoral fins, which look for all the world like arms and function as legs: although the spotted handfish can swim, it usually walks (or “gallops”) along the sandy sea floor using both its pectoral and ventral fins.

My first tendency, of course, would be to assume that a fish that can walk on arm-like appendages is climbing the evolutionary ladder. I have this mental image of a handfish, after a few more generations of random mutations, pulling itself up onto a beach to take a look around, and eventually adapting to life on land. But it turns out that just the opposite is the case: the spotted handfish is in dire danger of extinction. In 1996, the spotted handfish had the dubious distinction of becoming the first marine fish to appear on Australia’s endangered species list. Although the species was known to be abundant just a few decades ago, it’s now considered critically endangered—just steps away (as it were) from being extinct in the wild.

Getting Stepped On by Stars

Although no one can say with complete certainty why their numbers are dwindling, three factors are mentioned repeatedly. First, the considerable development in the Derwent Estuary area has caused a lot of silt runoff, clouding the waters and reducing the fish’s habitat. Second, heavy metals may be contaminating the waters, acting as a poison. But the most likely reason the spotted handfish is in trouble has to do with a predatory starfish known as the northern Pacific seastar, which was introduced into local waters accidentally and which has multiplied at an astonishing rate.

Conservationists have been studying the spotted handfish carefully to find solutions to this problem, and some hopeful progress is being made. For one thing, spotted handfish have been successfully bred in captivity and reintroduced to their native habitat. For another, biologists have discovered that spotted handfish are happy to use an artificial spawning substrate made out of ceramic—even in the wild. This is all good news, but without a great deal more help, the ongoing dangers from development and hungry starfish may leave the spotted handfish with nowhere to run.

Note: This is an updated version of an article that originally appeared on Interesting Thing of the Day on November 20, 2004.