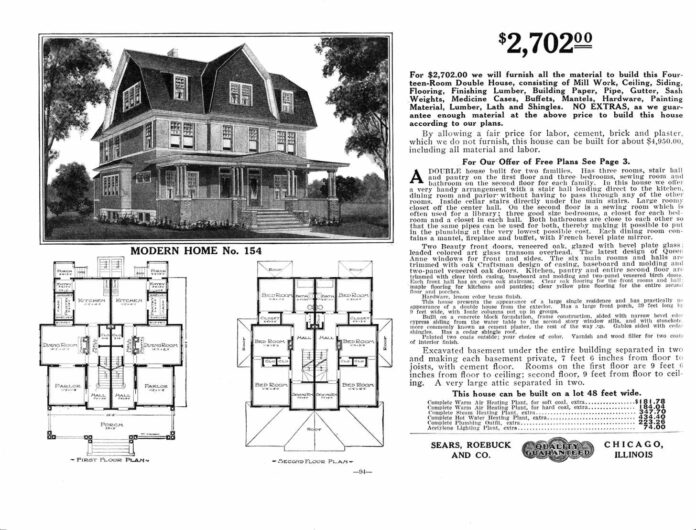 In the few years since I’ve become a homeowner, I’ve had to deal with a long list of problems, including issues with our foundation, roof, and sewer. That’s not too surprising given that our house is nearly 100 years old—and both the original builders and previous owners clearly made some bad decisions. Indeed, part of what causes me grief is simply not knowing exactly how the house was put together or modified.

Had I been in the market for a house at the time mine was constructed, I might well have decided to leave nothing to chance by building my own house from a kit purchased by mail order from Sears Roebuck & Co. Along with clothes, housewares, toys, and tools, Sears catalogs in the early 20th century featured entire houses. For well under $1000 for a basic model, you could purchase a complete kit for a house—including everything from the lumber to the nails and paint—that you’d assemble yourself (with the help of family and friends) or hire a contractor to assemble for you.

Mail Me a House

Sears had been selling building materials by mail order since 1895, but they’d found it unprofitable. In 1908, in an effort to revitalize that business, they began offering plans and kits for houses. In addition to featuring them in their general catalog, Sears offered a separate catalog just for houses: the Book of Modern Homes and Building Plans. Although I’ve read several different accounts of prices that first year, one source (The Houses That Sears Built: Everything You Ever Wanted to Know About Sears Catalog Homes by Rosemary Thornton) mentions a range from $495 to $4,115—equivalent to roughly $14,000 to $113,000 in today’s dollars.

A customer placed an order, and within as little as two weeks, the 30,000 or so pieces of the new home arrived in two boxcars at the train station nearest the house’s intended destination. (Transporting the materials to the building site was the customer’s problem.) Each kit came with a 75-page instruction manual, and by all accounts the instructions were excellent, even for people without extensive construction experience.

Because Sears had already built a solid reputation as a mail-order supplier, their new business took off rapidly. In 1911, Sears even began offering its own mortgages. The applications asked how much money the borrower could pay up front and per-month, as well as the person’s occupation, but required no further documentation. For all practical purposes, if you had a job, you got a mortgage. In 1915, Sears made another innovation: thanks to the two lumber mills Sears was now running, the kits featured pre-cut lumber, with every piece already fitted. That change significantly reduced construction time and made the houses an even better value.

Although Sears never claimed to be a trendsetter, they certainly took advantage of the latest building innovations. What made Sears Modern Homes modern was the use of new building materials such as drywall and asphalt shingles and the option to include amenities such as electricity, indoor plumbing, and central heating, all of which were somewhat novel for typical residences of the time.

Throughout the 1920s, housing sales brought tremendous profits to Sears. But when the Depression hit, large numbers of homeowners defaulted on their easy Sears mortgages, and the company lost millions of dollars. In the years that followed, housing sales dropped considerably. By 1940, Sears realized the business was not sustainable and reluctantly stopped selling their catalog homes.

Sears claims to have sold over 100,000 houses in 447 styles between 1908 and 1940, and some estimates put the number as high as 110,000, but the actual figure may have been closer to 75,000. All the company’s records pertaining to house sales were destroyed in the 1940s, so the number may never be known for sure. Regardless, Sears sold a significant number of their catalog homes, many of which are still standing today.

Sears was not the first company to offer consumers kits to build complete houses, but they sold more units, in a wider variety of styles, than any of their competitors and are the best-known mail-order house retailer. Even in the Sears Modern Homes era, though, kits weren’t the only way to obtain an easy-to-build house. Prefabricated houses were available as far back as the mid-19th century, and continue to be sold today. To create a prefab house, factories typically preassemble entire walls, trusses, and other major components and ship them to the construction site, where builders put them together—a much simpler and quicker process than building everything from scratch or even from a kit. Because these modules are built in quantity on an assembly line, costs are lower. Of course, buyers still pay a premium over the simple, pre-cut pieces; customers must choose from a limited range of sizes and designs; and prefab houses can’t be used on certain kinds of lots.

Be that as it may, the idea of catalog homes keeps cropping up in new forms. For example, Swedish home-furnishings giant IKEA sells their own houses in several European countries, with designs that sound like a cross between the Sears kits and fully prefabricated houses. Although IKEA supplies all the components in a form that can be assembled relatively easy, they’re not consumer-friendly kits. The houses require assembly by contractors (and considerably more tools than an Allen wrench); the idea is that they’ll be sold in much the same way as conventional houses, but at considerably lower cost because of their standardized, modular design and lower construction costs. And yet they’ll be attractive and trendy, much like the furniture IKEA hopes you’ll buy to fill your new home. (Other companies, including Finland’s Artichouse, also offer kit homes in Europe. In North America, prefabricated homes are often constructed using SIPs—structural insulated panels.)

One thing Sears couldn’t include in their kits, of course, was real estate, and empty parcels of land are quite a bit harder to come by now than they were a century ago. In addition, modern building codes are stricter than they once were, and mortgage applications are just a wee bit more complex. For these and many other reasons, catalog houses like those Sears once sold are unlikely to make a comeback. But it was a great idea while it lasted, and you never know—someone just might come up with a way to recycle it.

Note: This is an updated version of an article that originally appeared on Interesting Thing of the Day on November 13, 2006.