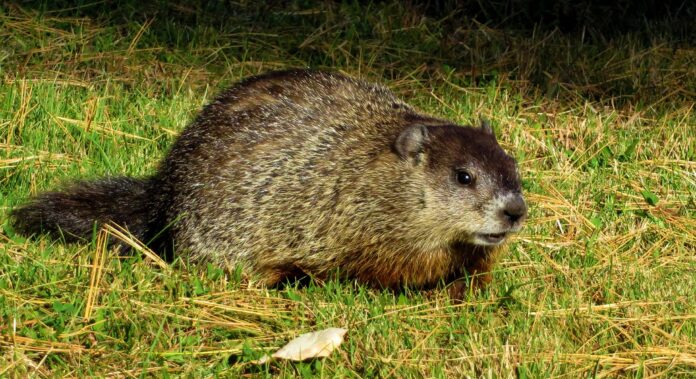 I need to say a few words about woodchucks. (First let me pause while you say the tongue-twister to yourself. Go on, you know you want to. Get it out of your system. Good.) I never understood what the word “chuck” was supposed to mean in the rhyme. Chuck isn’t often used as a verb; when it is, its most common meaning is “to throw” (as in, “Chuck that avocado pit in the trash”). This is naturally not the type of thing we expect a woodchuck to be capable of (as indicated by the counterfactual nature of the question in the rhyme). So the real question is why anyone would have given this animal such a nonsensical name in the first place.

(As an aside, woodchuck isn’t the only nonsensical name this animal has. It’s also called a groundhog. Oddly enough, “groundhog” is a fairly literal translation of the Dutch word aardvark, even though aardvarks don’t look anything like hogs. Woodchucks (Marmota monax) are rodents, or more precisely marmots, and are not even distantly related to either aardvarks or hogs. The most salient similarity among the three species is a propensity for burrowing.)

The name woodchuck is derived from a word in one of the Algonquian languages spoken by Native Americans—either the Cree word otchek or the related Ojibwa word otchig. The English-speaking settlers in North America found these words hard to pronounce, so they substituted syllables that sounded more familiar and yet approximated the original sound; hence “woodchuck.” The process of consciously or unconsciously changing the shape of a word to reflect the existing morphemes (minimal units of meaning) in a language is known as folk etymology. This process frequently occurs when one language “borrows” a word from another and the speakers of the borrowing language mishear, or misunderstand the origin of, the original word.

English has many examples of folk etymology. Cockroach comes from the Spanish word cucaracha. As with woodchuck, the Spanish word was transformed into English by substituting similar-sounding morphemes: cock (as in rooster) and roach (which at that time was simply the name of a type of fish). There wasn’t anything about a cockroach that suggested “rooster” or “fish,” of course; it’s simply a matter of the sounds fitting. The same thing happened with the word polecat (from French poule chat, a cat that feeds on poultry) and ten-gallon hat (from Spanish galón, a braid). English speakers also mistook a napron for an apron, and even an ewt for a newt.

Closely related to folk etymology (or even, according to some people, a subset of the phenomenon) is a process called back-formation. Back-formation occurs when speakers remove a portion of a word, incorrectly assuming it’s a suffix, to form a new word. For example, the word pea was pease in Middle English, but that sounded like a plural, so the “s” sound at the end was dropped to make a false singular. Similarly, the word emote is mistakenly assumed to be the root of emotion, which is logical enough since -tion is a common suffix in English. But in this case, the word dropped whole from French (émotion) into English, so that derivation is erroneous. Other words in English that have been mistakenly created by back-formation include liaise, enthuse, laze, and evanesce. Some back-formed words, however, after enough time in circulation, become generally accepted: donate, sculpt, and even beg (from beggar) fall into this category.

A postscript about the woodchuck: The Algonquian words from which “woodchuck” was derived actually refer to the fisher (or wejack), a carnivorous mammal (Martes pennanti) that bears only a superficial resemblance to the woodchuck. So woodchuck turns out to be not only folk etymology, but a misnomer at that.

Note: This is an updated version of an article that originally appeared on Interesting Thing of the Day on October 30, 2003, and again in a slightly revised form on December 22, 2004.