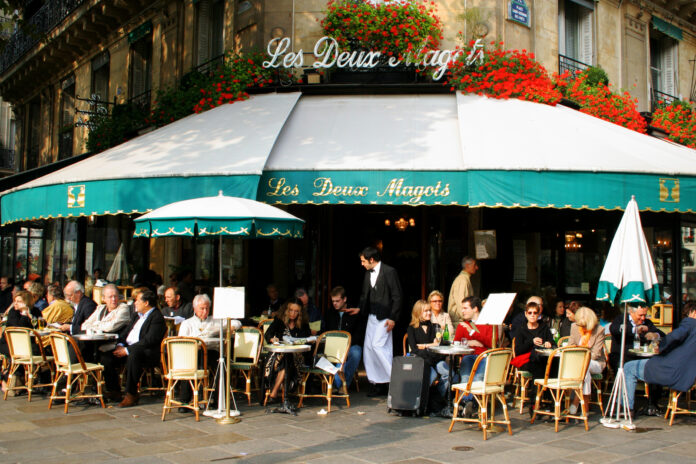 My official job description only requires me to deliver articles about “things,” which I have intentionally defined as broadly as possible. So if, say, the way a waitress treats me seems interesting, that should be fair game. Thus I present for your consideration an interesting thing that happened at lunch one day in France.

Around noon on this day, Morgen and I walked into a café near the Pompidou Center in Paris. We were shown to a table and given menus; a few minutes later, our waitress returned to take our order. We waited a while longer and our food came; it was delicious, just as we’d expected. This pattern of enter-select-order-eat is, with few and minor variations, common all over the world, and I have repeated this ritual an untold number of times in a variety of languages. But in France, as any travel book will tell you, the expectation is that you will want to savor your meal, perhaps have dessert and a relaxing cup of coffee, and then remain at your table for a further hour or two enjoying the company of whomever you’re with. There is no notion whatsoever of rushing patrons out to make space available for the next customer; in France, once you’ve claimed a table, it’s yours for as long as you care to stay—even if you consumed the last of your meal hours ago. This attitude, I must say, strikes me as wonderfully civilized, and I can think of two or three North American countries that would do well to adopt the same custom.

I’ve had plenty of long, leisurely meals at restaurants in France, so this approach to interacting with customers is familiar and comfortable. And yet, there is one aspect of the restaurant ritual in France that I find completely inscrutable—namely, the process whereby you attract your waiter or waitress’s attention to tell them you’re ready for your check. The check won’t arrive automatically; that would be a faux pas, because it would make the patrons feel rushed. No, you are supposed to ask for it when you’re ready, which is fine—this is the norm in lots of countries. What the travel guides and phrase books tell you is what to say to request your bill—”L’addition, s’il vous plaît.” That’s easy enough. What the books don’t tell you is how to convey this phrase to the waitress who is 20 meters away in a noisy restaurant with her back turned to you.

In North America, on the rare occasion that your bill doesn’t arrive by itself within three seconds of the time your dessert is served, getting it is a simple matter of making eye contact with a waiter, who will have been trained to scan his tables every few minutes to see if there’s any possibility of encouraging their occupants to leave. In France, after dessert and coffee, the wait staff assumes that you want to be left alone, so signaling that you want something can be quite tricky. After we had finished our dessert and coffee and the obligatory one-hour after-lunch conversation, we were ready to get on with our day, so I tried to make eye contact with our waitress. Over a period of about 20 minutes, I stared intently in her direction, plaintively sending out “look at me” vibes, but to no avail. It’s not that she was ignoring us, either. Every few minutes she did in fact scan the restaurant and make eye contact with me, but the duration of eye contact was so short—I’m going to say, about 1/12 of a second—that there was not enough time for me to wave my hand in a “bring us the check” gesture or even raise my eyebrows.

This was not the first time we had encountered this difficulty; it was the norm at the majority of restaurants we visited in France. Morgen and I pondered the logic behind this rapid-scanning move and, amazingly, came up with the same explanation independently of each other. We concluded that the rate of eye movement was carefully calculated such that the amount of time spent looking at any given table was just enough to determine if it was on fire. Flames, we agreed, would register during 1/12 of a second and prompt the waitress to take action; mere eye contact would not, presumably because French waitresses are used to being stared at. I asked Morgen if she had any matches; she did not. Then it dawned on me: this must be why so many people in France smoke. It’s the only way you can be assured of having a ready supply of materials suitable for setting fire to your tablecloth and thus attracting the attention of the waitstaff.

Fortunately, though, our very failure to light up cigarettes apparently stood out after a while, and I was able to attract the waitress’s attention for the crucial 1/3 of a second it took me to raise my eyebrows. Then she smiled and mouthed “l’addition?” from across the room, and I smiled and nodded back. Luckily, the service was already included with the bill, otherwise I wouldn’t have known whether to tip less for failing to pay attention to the customer, or more for doing a truly excellent job of unobtrusive fire detection.

Note: This is an updated version of an article that originally appeared on Interesting Thing of the Day on June 5, 2003, and again in a slightly revised form on August 29, 2004.