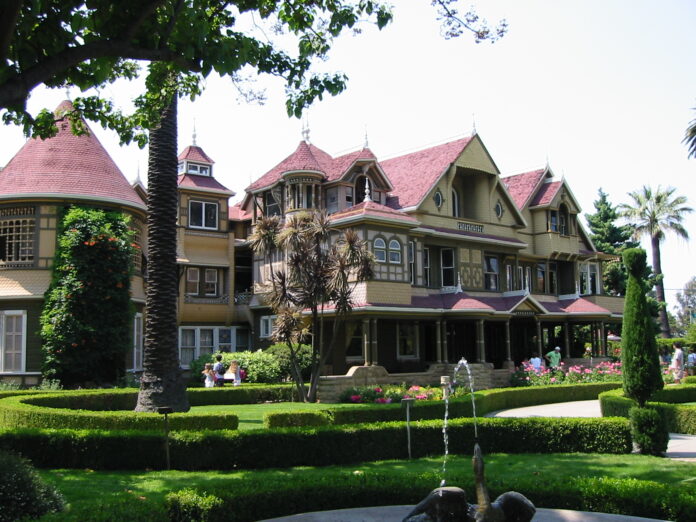 San Jose, California—about an hour’s drive south of San Francisco—is the unofficial center of Silicon Valley. Lots of high-tech companies are based in or near San Jose, and of the dozens of times I’ve been there, all but one or two were for a technology-related conference of one sort or another. It’s an attractive small city with some excellent museums, parks, and restaurants. But San Jose’s biggest tourist attraction was built long before computers made their mark on the area. About five miles (8km) from downtown, the Winchester Mystery House draws huge crowds almost every day of the year for a simple walking tour of what may be the country’s strangest residential building.

Everyone in the Bay Area seems to know about the Winchester House, to the extent that billboards advertising the attraction don’t give any information other than its name. When I first lived in northern California, these signs puzzled me. Even after reading a brochure about the house, I didn’t quite grasp what it was all about until I visited for myself. The Winchester Mystery House is undeniably interesting, though whether it lives up to its hype is another question.

From the outside, the building appears to be nothing more than a sprawling Victorian mansion surrounded by meticulously groomed gardens, soothing fountains, and lots of tour buses. It’s pretty, though not particularly shocking. But the interior of the building and the story of its construction are bizarre and fascinating. Tickets are surprisingly expensive, and there’s sometimes a long wait for your guided tour to begin. But once inside, you forget all about that. You’re walking through a mystery.

The Winchester House has 160 rooms, with a total of more than 10,000 windows, 2,000 doors, 52 skylights, 47 fireplaces, 40 bedrooms, 40 staircases, 6 kitchens, 3 elevators, 2 basements, 1 shower, and 349.7 other impressive-sounding numerical statistics. What makes it most interesting, though, is what it doesn’t have—any rhyme or reason. The entire house seems to have been randomly assembled, disassembled, and reassembled numerous times, with no master plan or design. And in fact, that’s pretty much what happened. Stairs lead to nowhere; floors have doors and windows in them; doors open into solid walls. All of this and more was due to an inexplicable obsession that drove its erstwhile owner, Sarah Winchester, to keep the building continuously under construction for 38 years.

The story begins a century and a half ago. Oliver Winchester was the co-owner of a successful shirt manufacturing business. In 1857, just before the U.S. Civil War broke out, Winchester took over the Volcanic Repeating Arms Company. The company, which would later be renamed Winchester Repeating Arms Company, was responsible for revolutionary advances in rifle design. With repeating rifles, a soldier could fire several times without reloading, and sales of the weapons soon made Winchester both wealthy and famous. His son and heir, William Wirt Winchester, married Sarah Pardee in 1862.

Sarah was a diminutive woman at 4 feet, 10 inches (147cm) tall, but was reputed to be charming, intelligent, and beautiful. She gave birth in 1866 to the couple’s first and only child, Annie, who died before she was two weeks old. Annie’s death affected Sarah deeply, and for years she withdrew from the public and her family alike. In 1880 Oliver Winchester died, leaving his fortune to his son William. But the following year, William died of tuberculosis. This left Sarah the only heir to the Winchester fortune, an inheritance of US$20 million, plus nearly 50 percent ownership in the company, which paid her $1,000 per day. Not too shabby even by today’s standards, these figures were astronomical in the late 1800s. But the fortune was no consolation to Sarah, who began to believe there was a curse on her family.

Shortly thereafter, Sarah Winchester moved from New Haven, Connecticut to San Jose, purchased a modest farm house, and began building. This is where history ends and speculation begins. It’s also an appropriate time for a brief cautionary digression. Dozens of websites, booklets, and brochures (and even the tour guides at the Winchester House) tell variations on the story of why Mrs. Winchester behaved the way she did for the rest of her life. Sadly, most of these stories appear to have been copied from each other and there’s no persuasive evidence to support any of them. This mirrors the situation a century ago, when a fanciful tale about Mrs. Winchester would be told, embellished, and retold until it was impossible to separate truth from fiction. Thus, assume that most of what follows is apocryphal. And a word to the wise: history is slippery.

What we know is that Mrs. Winchester hired builders to work around the clock, every day, for 38 years. The house was in a constant state of change, with rooms being built and modified on a daily basis. According to legend, Mrs. Winchester had visited a psychic in Boston who convinced her that she was indeed under a curse of sorts. The spirits of those who had been killed by Winchester rifles had sought revenge from her family and were now haunting her. The only way to appease the spirits and prevent her own death, by some odd logic, was to ensure that construction on her house never stopped. One version of the tale has it that the labyrinthine interior of the house, including the stairs to nowhere and the dead ends, were meant to confuse or slow down the spirits. An alternative explanation was that Mrs. Winchester, in daily séances, received plans for the next day’s work directly from the dead, and simply did as she was told. Whether for one of these reasons, or simply being off her rocker, Sarah Winchester did indeed keep construction going for years on end, in what appears to be a completely random manner.

Whatever the reasoning she employed, it is certain that Mrs. Winchester was superstitious. One indication is her repeated use of the number 13 in features of the house: there are 13 bathrooms; 13 palm trees line the driveway; most of the windows have 13 panes; a sink drain has 13 holes; a chandelier that originally had 12 lights was modified to have 13; and so on. It is also frequently said that she slept in a different bedroom every night.

In 1906 when the great earthquake struck San Francisco, part of the Winchester house was damaged, including the bedroom in which Mrs. Winchester was sleeping that night. Although she was unharmed, she believed the spirits were trying to tell her something. As a result she had the front portion of the house blocked off, and continued construction elsewhere.

Spirit of the Winchester House

Sarah Winchester died in her sleep in 1922 at the age of 82. Construction on the house stopped immediately—some stories say carpenters stopped with nails hammered in halfway. In Sarah’s will—which consisted of 13 sections and included 13 signatures—the house was not mentioned specifically at all, but all her possessions were left to her niece, Frances Marriot. Marriot had all the furnishings removed from the house, a task which took more than six weeks due to the house’s design, then sold it to be used as a tourist attraction. It was later declared a California Historical Landmark, and is still open daily for tours.

According to some estimates, Sarah Winchester spent a total of $5.5 million building and rebuilding her house. As a tourist attraction, the Winchester Mystery House undoubtedly brings in money at a much faster rate than it was spent during the years of its construction. Appropriately enough, the reason for the house’s current success is much the same as the reason it was built: many of the people who visit believe the Winchester Mystery House is haunted. (Special nighttime flashlight tours every Halloween and Friday the 13th reinforce this idea.) Tour guides will tell you stories of unexplained noises, of faucets mysteriously turning themselves on, of rooms suddenly turning cold. I’ve been to the Winchester House a couple of times and have never seen a ghost, but if you’re ever in San Jose, I recommend a visit for the sheer weirdness of the experience.

Note: This is an updated version of an article that originally appeared on Interesting Thing of the Day on May 12, 2003, and again in a slightly revised form on August 17, 2004.