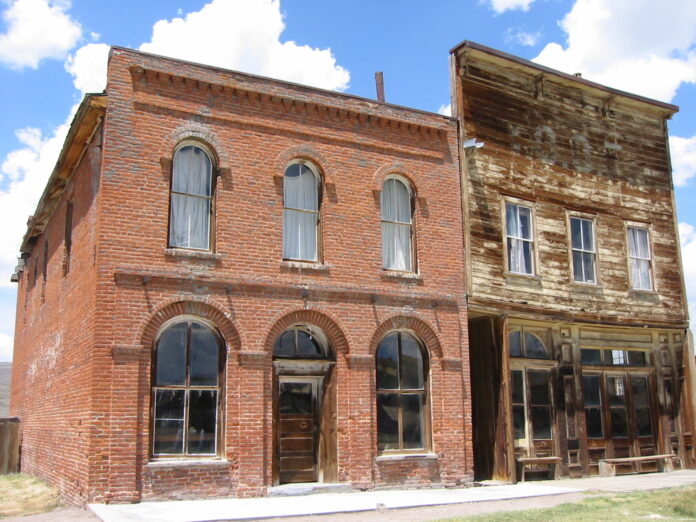 One year for my wife’s birthday, I bought her a book called Ghost Towns of Northern California. I was excited to find it, because Morgen is not an easy person to shop for. Ask her about her favorite things, and “decay” will be close to the top of the list. By this she doesn’t necessarily mean antiques; age itself is not the issue. She likes artifacts with visible signs of the passage of time. What do you buy for a person who likes decay? I figured a book on ghost towns might be just the thing—especially since many of them were close enough that we could actually visit them. And I was right: the book was a hit.

We decided to rent a car and drive to one of these towns over a long weekend. After perusing the book thoroughly, we chose Bodie, a day’s drive east of San Francisco, near the Nevada border. Bodie was said to be the largest and best-preserved ghost town in the United States, and it seemed like an ideal place to experience decay.

Waterman S. Body (sometimes spelled “Bodey”) and his partner E. S. “Black” Taylor discovered gold in the area in 1859 and built a cabin nearby. But Body froze to death the following year in a snowstorm while on his way back with supplies. Later that year, Taylor helped to establish a mining camp, which soon took on Body’s name. As a frequently told story has it, the spelling was changed when a sign painter who received verbal instructions guessed incorrectly, but everyone liked the spelling “Bodie” better because it was less likely to be mispronounced, and the new spelling stuck.

The camp grew slowly into a small town with only 20 miners, and was moderately successful throughout the 1860s and 1870s. But in 1878, a huge deposit of gold and silver was found at the Bodie Mine, and news of the strike prompted a rapid influx of miners—along with gold diggers of other sorts, who hoped to profit indirectly. Within two years, Bodie’s population had swelled to over 10,000, making it the second-largest city in California after San Francisco.

At its peak, Bodie had as many as 65 saloons, a popular red-light district, and gunfights in the streets on an almost daily basis. It was a lively—if notoriously lawless—town. A young girl whose parents were relocating the family to Bodie was overheard praying, “Goodbye, God, I’m going to Bodie.” Even as the town was thriving, decadence was its best-known feature.

Life in the Big City

Life was harsh in other ways as well. For one thing, the climate was extremely inhospitable. Located in the Sierra Nevada mountains at an elevation just above 8,000 feet (2,400m), Bodie experienced nighttime temperatures below freezing on all but a few days of the year. In the winter, temperatures as low as –40°(F/C) were common, along with extraordinarily strong winds and deep snowdrifts. The thin walls of typical homes provided very little insulation, and wood for heating was expensive. Because Bodie was above the timber line, there were no trees to be found as far as the eye could see, and lumber had to be transported from a source about 32 miles (50km) away. Bodie needed huge amounts of wood, too, as it was used to power the steam-driven mills and mining equipment, besides heating homes. For years, wood was brought in by wagon, but in 1881 a narrow-gauge railroad was built to haul wood from Mono Mills.

Even ignoring the climate and street violence, life in Bodie was difficult for the hardiest of souls. The mills, which ran 24 hours a day, seven days a week crushing ore, were incredibly loud, blanketing the town with constant noise and routinely deafening mill workers. The town also lacked a sewage system, and waste from thousands of outhouses soon tainted all the groundwater in the area, leading to widespread disease.

Within just a few years, however, the gold started to run out, and so did Bodie’s residents. By 1882, the town had shrunk to fewer than 500 people, most of the buildings simply deserted. The following year, Bodie mine stocks crashed and the town shrank even further.

A few people did stick around, however, hoping to squeeze a bit more gold from the failing mines. Jim Cain was a local businessman who had made a small fortune transporting lumber to the town. He bought up many of the mines, as well as the Bodie Bank. Several years later, Cain’s investment paid off. In 1890, he successfully used a new cyanide process to extract significant amounts of gold and silver from the tailings left over from years of mining. Thanks to Cain’s business savvy and modern technology, Bodie enjoyed a minor renaissance.

But wood was becoming even more scarce, and the high cost of running the steam-powered mills was cutting into Cain’s profits. In 1892, he invested in a new, unproven technology that promised to slash energy costs. A hydroelectric plant was built on Green Creek some 13 miles (20km) away, and power lines were strung to one of Bodie’s mills. Long-distance transmission of electricity was in its infancy, and some still regarded it as a ridiculous idea. Nevertheless, engineers persisted—carefully keeping the power lines straight for fear the electricity would fall out of the wires if it had to turn a corner. The plan worked, making Bodie one of the first towns to receive electricity from a distance. Sadly, however, a major fire just a few months earlier had wiped out most of the town’s business district. And although the mill, with its electric power and cyanide process, remained profitable for decades, the town itself was rapidly fading into obscurity and lifelessness.

By 1932, Cain’s bank was among the few businesses still open in Bodie. In that year, a small boy playing with matches accidentally started another fire. The town had plenty of water and firefighting equipment, but the fire hoses were clogged with debris because intake screens from the reservoirs had not been replaced when they were cleaned. This massive fire wiped out the majority of the town’s remaining buildings, most of which had long ago been vacated. Cain left Bodie shortly thereafter, but he didn’t abandon it entirely: he hired a watchman to protect the town. Even though Cain died in 1939, the town remained guarded, and in 1962 it became a California State Historic Park.

Hold It Right There

California’s park service maintains Bodie in what it calls a state of “arrested decay.” This means that the buildings are kept just as they were found. If a building was leaning, it was braced internally so it continued to lean at the same angle—but no farther. Similarly, any necessary repairs are done as discreetly as possible to preserve the former appearance of the buildings. Only about 170 buildings remain standing, five percent of the town’s pre-1892 size. Of these, most are kept locked to preserve the contents inside just as they were.

If you visit Bodie (as I’ve done several times since that first excursion), you can walk through the streets, gazing into windows of houses, businesses, and schools. Many buildings give the appearance that their occupants left quite suddenly, dropping whatever they had been doing. You’ll see chips and cards from a poker game in progress, store shelves stocked with goods, and schoolbooks open on desks. The effect is eerie, and makes the designation “ghost town” seem quite apt. A few buildings, including the only remaining church, allow visitors inside, and a small museum houses numerous artifacts from Bodie’s heyday. On some days, docents offer guided tours of the Standard Mill and other delicate areas that are normally off limits to tourists.

Bodie is a wonderful place to go if you’re fond of decay. It’s more than just old buildings, too. You can feel the emotions that led to the town’s rise and fall—hope, greed, passion, anger, desperation, sadness. But more than anything, it is a place of great beauty. Not striking landscapes or brilliant architecture, but the beauty of human history in progress—both then and now.

Note: This is an updated version of an article that originally appeared on Interesting Thing of the Day on April 11, 2003, and again in a slightly revised form on November 2, 2004.